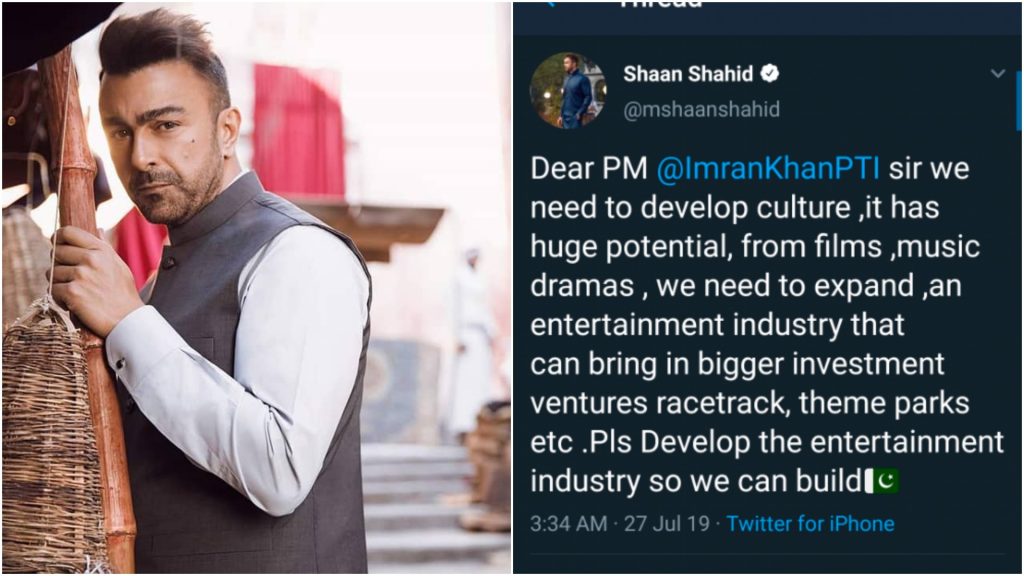 Shaan has never been afraid to speak his heart out. Only recently Shaan has single handedly been trying to run a campaign for the legendary artists to reclaim their space in the Naya Pakistan.

Shaan is calling all film community and sports representatives to unite for films, arts and sports as he thinks that arts and sports are not provided with the deserved facilities and opportunities. He shared the idea in a tweet with PM Imran Khan a few days ago and there has been no stopping him since then:

After putting forward his idea, Shaan then went on to remind the nation of the good days they’ve seen because of this very industry, when artists used to visit Pakistan very often:

Can you believe Walt Disney came to Pakistan?

These were the times also . When art also came with politics.. pic.twitter.com/cHLyP9x6oa

Memories of a forgotten era pic.twitter.com/v5JjvrbCaN

Memories of a forgotten era . The only source of music now is coke studio and less than 5 top female singers in a population of 23 carore pic.twitter.com/AZGx7qVMxN

Shaan also reminded people of the true legends the film and television industry has produced that have now been forgotten:

He made sure people were reminded of their excellent work and services in the industry, starting with Qawee Khan sahab:

Rahat Kazmi and the magic he created:

#Letsbringourprideback🇵🇰Rahat kazmi sb such brilliance in his craft , he worked when passion , and hard work were the only satisfaction for an actor . #muchrespectsir I wish we had a #performingartsmuseum where the future generations can come and take pride .#halloffame #ptv pic.twitter.com/Il0foYvCRF

#Letsbringourprideback 🇵🇰 shehnaz shiekh Jee. One of the most effortless artist natural to the core of her characters.such brilliance and such simplicity . #halloffame I wish #ptvactingworkshops should start, with all the greats of TV to pass on the knowledge ❤️🇵🇰🙏🏼 pic.twitter.com/J935RlhUSK

Abid Ali and his passion:

#Letsbringourprideback🇵🇰the man I grew up watching on PTV Abid Ali sb the master of his craft . sir your style of acting is still practiced by many. Your passion , dedication and honesty to your craft can be seen in your work #halloffame #ptvactingworkshops pic.twitter.com/JbTVlfYTkL

Talat Hussain and his iconic roles:

#Letsbringourprideback🇵🇰 simple brilliance , the intensity the delivery the characters he played still etched in our minds and hearts #halloffame #ptvactingworkshops learn the knowledge ❤️🇵🇰🙏🏼 pic.twitter.com/Gwyjr3IE8K

Irfan Khoosat in all his glory:

#Letsbringourprideback🇵🇰 simple brilliance , the intensity the delivery the characters he played still etched in our minds and hearts #halloffame #ptvactingworkshops learn the knowledge ❤️🇵🇰🙏🏼 pic.twitter.com/Gwyjr3IE8K

#Letsbringourprideback🇵🇰 marina Khan huge fan of your work. I wish writers can write scripts around artists like marina Khan . To see her seamless craft in all its glory . Thankyou for sharing with us your gift . #Halloffame #ptvactingworkshops pic.twitter.com/oFqXWtwf8X

Uzma Gillani and her efforts:

#Letsbringourprideback 🇵🇰uzma Gillani Jee, brilliance , dedication and passion towards her craft Thankyou for your endless work that will live for generations to come . ##halloffame #ptvactingworkshops pic.twitter.com/kKlHdqJWlH

Firdous Jamal and his distinct personality:

#Letsbringourprideback🇵🇰 an artist lives in his own zone, he speaks a different language, his choice of words might be hated , but his endless dedication to his work & his brilliance in acting can never be disrespected. #livinglegend #halloffame #forgiveforgetmoveon 🙏🏼🇵🇰❤️ pic.twitter.com/l7VaiOWsHw

Sahira Kazmi and her aura:

#letsbringourprideback 🇵🇰 what a women what an artist brilliant in every way . True to her craft. Thankyou for your endless contributions and services to this nation🇵🇰 #halloffame . #ptvactingworkshops pic.twitter.com/ytavCHmqXG

Jahangir Khan, a legend that must never be forgotten:

Sohail Abbas, who scored the highest number of goals

Shaan also spoke about empowering our women in the sports field, and he had some serious points to make:

When was the last time when you watched a women’s cricket match in the stadium ?

By bringing women’s cricket in the light you bring in footfall of the people create new stars , get new sponsors , our women will be part of sports health and early marriages will be less our women force will be utilised in their best talents

Very few women in our families play sports why?

He talked about there being almost no women athletes in the country:

Memories of a forgotten era . Almost no women athletes and international recognition now ..and we are still arguing on basic rights pic.twitter.com/LfBH7sT4wC

And not just women but even men athletes that the country severely lacks:

What about the men swimmers ? No where to be seen ? What about any other sports for women or is that not permitted as well brothers ..

He then talked about squash and how the scope of squash has gone down astonishingly:

Does anyone know where are squash went? I can’t seem to find it… only found the last trophies and glory in a glass case with dust on them .

He also suggested how films can make a great impact and benefit the country when promoted all around the world:

#letsbringourpridehome🇵🇰Our films that tell our story should be promoted by the 🇵🇰embassies in the world. our film exports can help build the economy . New policies be given ,tax cuts for new investment in Entertainment sector will boost growth. @ImranKhanPTI #Trustyourtalent🇵🇰 pic.twitter.com/DXTyw6rgsx

His tweets got many thinking and many came forward to share the struggles they’ve been facing in the country:

& Football? Pak Women Football Team has the strength. We defeated Maldives, Afghanistan, Bhutan & gave tough time to the greats of SAFF. Now where are we? We sponsor our ownself, we pay for trainings/events outside 🇵🇰 & paid 2$ a day in camps. How do we develop? @mshaanshahid https://t.co/ub5LKcqBJk

People mentioned how the country has so much talent but no resources or sponsors:

Sir do anyone know in Pakistan there exists Karate too. They have International players and also medalist too. Yet again they have to do all their accomdations and every thing themselves. Also Female Karate players too. Who are the pride but no one knows. https://t.co/j9bU1lJ9wo

Jhangir Khan world no 1 for 9 years 5 month.
Jhansher khan world no 1 9 years 7 month. More than 20 times we won world championship in Squash. And now we are cash strapped to support our players. #StandByMe

Let's do that, ask questions, ask for accountability. Let's put our athletes ahead of our sports administrators. Let's demand a better sports system and culture so our next gen has better future.

People were lauding Shaan for single handedly get people to start talking about the issue:

I was appalled by the state of hockey and am doing what I can to raise the issue. Would love to see what we can do collectively as artistes to help. Let me know what you are thinking

The Cinema/Art/Drama/Literature of any country/region is a documented record of culture/civilization of that place over the years.
Ignorance (or lack of knowledge) is bound to term it is as mere *naach gaana*.
But the vital role of the former stays put.
So yes, fully endorsed!

May Allah give you success. Only good and experienced professional in relevant field can do betterment for their community

What a great initiative by Shaan, we’re absolutely rooting for you and hoping that you get what you’re trying to achieve.

Yasir Hussain shares pictures from his baat pakki with a savage caption, receives love & some backlash

#SupportFirdousJamal is trending at no.1 and here's everything you need to know about it