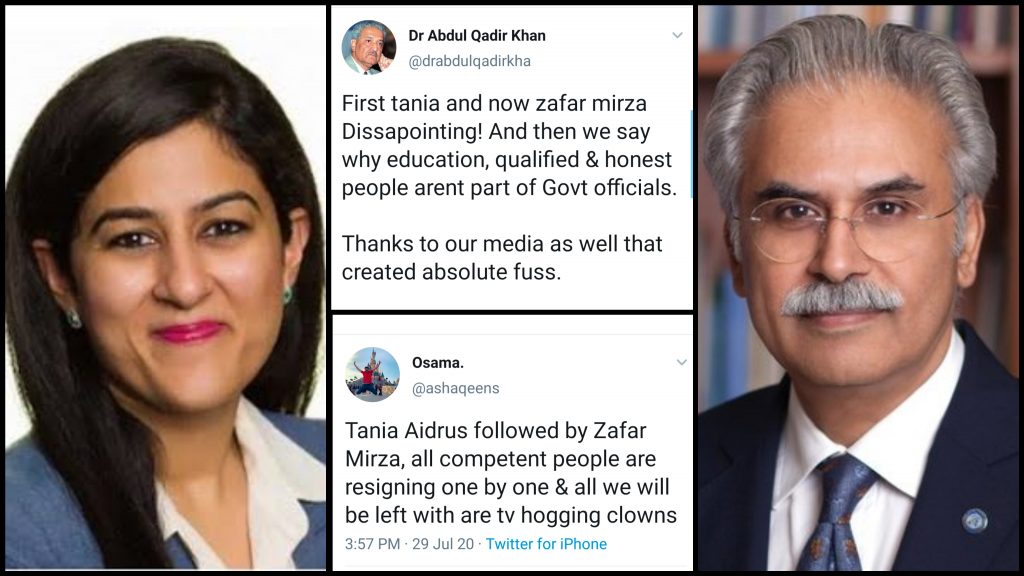 Among all the things that netizens are trending, the hashtags #TaniaAidrus, #SAPM and #ZafarMirza have become the top 3 trends after people share how heart broken they are. 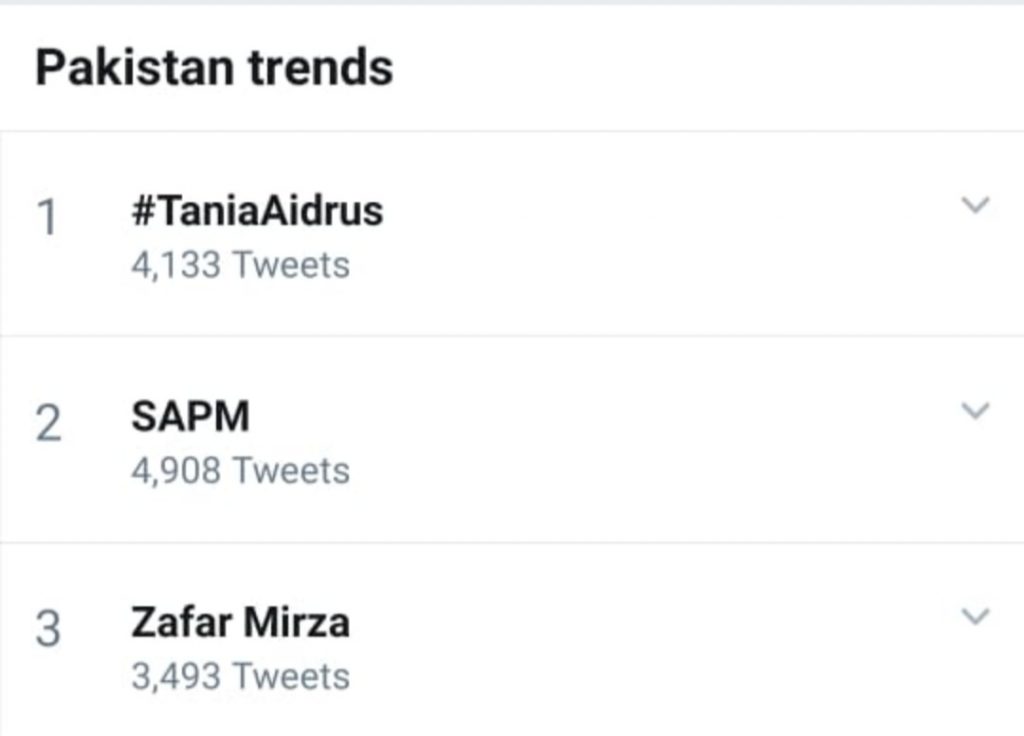 Special Assistants to Prime Minister, Tania Aidrus (Digital Pakistan) and Zafar Mirza (Health) submitted their resignations today and shared the news with the world via tweets:

Criticism levied towards the state as a consequence of my citizenship status is clouding the purpose of Digital Pakistan. In the greater public interest, I have submitted my resignation from the SAPM role. I will continue to serve my country and the PM’s vision to my best ability pic.twitter.com/BWBvBvO6uz

<352> I have resigned as SAPM. I came to 🇵🇰 on a personal invitation of @ImranKhanPTI leaving WHO. I worked hard & honestly. It was a privilege to serve Pakistan. I am satisfied that I leave at a time when COVID-19 has declined in 🇵🇰 as a result of a grand national effort.

And people have lost all hope!

And brain drain continues from Pakistan.
Today we as nation have disowned overseas Pakistanis. And gave them a clear message; much talent & recognized you might be in west!! don't dare to come for rescue of your nation. Ban media please.
#TaniaAidrus #SAPM #drzafarmirza pic.twitter.com/QwskqNPtbe

People wanted to know if this was the end:

And brain drain continues from Pakistan.
Today we as nation have disowned overseas Pakistanis. And gave them a clear message; much talent & recognized you might be in west!! don't dare to come for rescue of your nation. Ban media please.
#TaniaAidrus #SAPM #drzafarmirza pic.twitter.com/QwskqNPtbe

People wanted to know what pur priorities are as a nation:

Are our priorities alligned as a nation? Today two good advisors a)@taidrus and b)@zfrmrza resigned. Everyone in policy circle understand the hard work they were doing for general welfare of Pakistan. #TaniaAidrus #ZafarMirza pic.twitter.com/Q4ppBiBC4V

First tania and now zafar mirza Dissapointing! And then we say why education, qualified & honest people arent part of Govt officials.
Two competent people gave resignation due to the dirty politics played by Media and opposition. We are sorry @taidrus.#TaniaAidrus #ZafarMirza pic.twitter.com/IAn6TYM7Ro

Thanks to our media as well that created absolute fuss.

People were blaming it on the media:

Two competent people gave resignation due to the dirty politics played by Media and opposition. We are sorry @taidrus. #TaniaAidrus pic.twitter.com/1eoQSQDJT1

People were thanking them for their sincere contribution:

Their resignations are regrettable to say the least. Both media as well as legislation is responsible for this mess. Thank you for all your sincere contributions to Pakistan! #TaniaAidrus#ZafarMirza #SAPM pic.twitter.com/6VEhmBevXr

You actually refused to accept Aamir Liaqat's resignation and accepted the resignations of Dr. Zafar Mirza and Tania Aidrus? Good luck finding professionals to run your government in future @ImranKhanPTI

Tania Aidrus followed by Zafar Mirza, all competent people are resigning one by one & all we will be left with are tv hogging clowns

People were lauding Zafar Mirza for his efforts:

Zafar Mirza and people like Dr Faisal Sultan are the reason why Pakistan was doing well on corona. Because they're experts and know what the fuck they're talking about. Not fighting over who gets to tell you if moon is sighted or not. Fucking low hanging fruit to make you happy.

People were calling it a sad day for Pakistan:

*Atif Mian
*Nasir Khan Durrani
*Shabbar Zaidi
*Tania Aidrus
*Zafar Mirza
They all wanted to help us but we just don't want to get out of the shithole we are in.
Another sad day for Pakistan.

People think it’s what we deserve:

We can't tolerate Atif Milan because he is ahmedi , we can't accept Tania and Zafar Mirza because they are dual nationals…we deserve these corrupt sharifs and zardaris

People were throwing shade at Aamir Liaquat’s resignation being rejected:

It'll be shame if Dr. Zafar Mirza and Tania Aidrus's resignations are accepted by @ImranKhanPTI because we know a mango aficionado and a resident joker walked to the PM house and his resignation was rejected.

What do you think about the resignations? Let us know in the comments below!