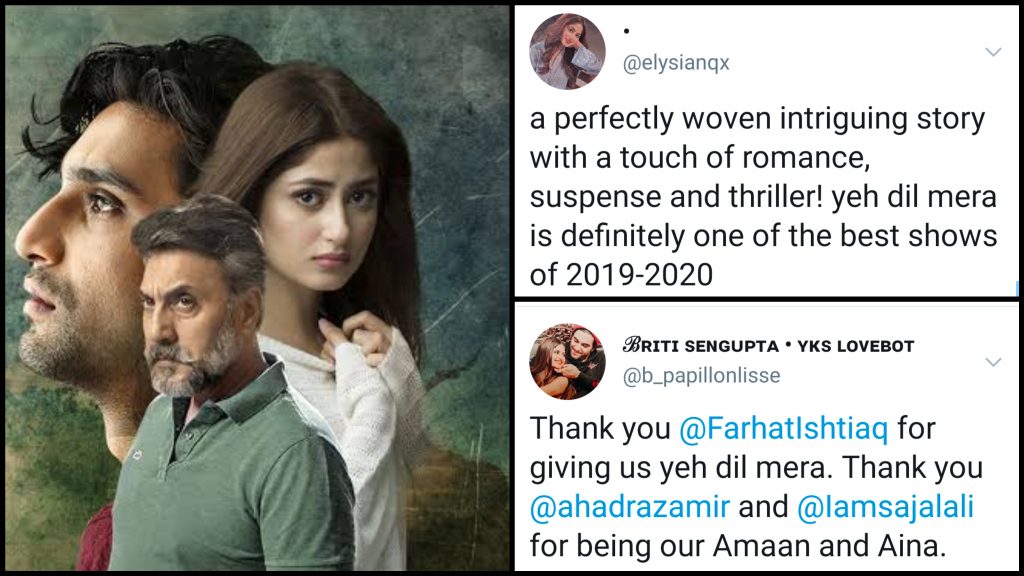 If you’re a Sajal and Ahad fan from the Yakeen Ka Safar days, we know you must have loved Yeh Dil Mera, the real life couple’s third drama together that introduced the genre of thrillers in the industry and aced every part of it!

Looking back at the drama, Sahad fandom is celebrating one very successful year of the drama and its just heart warming!

One year to the drama that created sensation around the world! That made many people go over Ahad and Sajal! The drama that made record with ratings and trends!

Fans were especially lauding Farhat Ishtiaq for her magic!

Thank you @FarhatIshtiaq for giving us yeh dil mera. Thank you @ahadrazamir and @Iamsajalali for being our Amaan and Aina. I love you three because whenever you people come together the project becomes iconic. Special mention to Wednesday too.#1YearOfYehDilMera.

People were lauding Sajal for playing an Aina who will always rule our heart!

whenever aina used to get nightmares and wake up from them, the way sajal portrayed aina’s emotions and fears was incredible! i wanted to give her a hug every time she got scared #1YearOfYehDilMera pic.twitter.com/6uTFTVhfx1

Praise was pouring in for Ahad as well:

ahad raza mir in yeh dil mera is truly something on another level. the way he portrayed amaan’s character is just commendable and his performance was beyond amazing. he was so so good, left me speechless #1YearOfYehDilMera pic.twitter.com/L2k8bsvIca

It was a treat to watch!

10 on 10 for the breathtaking cinematography, we all also gotta appreciate how beautiful pakistan is!

"yeh plate lao"
BABIES THEY WERE SO CUTE 🥺😭
I SWEAR YEH DIL MERA SERVED WITH THE SCENES#1YearOfYehDilMera pic.twitter.com/nLZPerVoQ2

Both the actors gave us a performance to remember:

Yeh Dil Mera is such a special drama to me! Sahad nailed it as Amaina! The emotions, the dialogues, the acting, the chemistry!!!! Beyond amazing and beautiful!!@Iamsajalali @ahadrazamir #1YearofYehDilMera pic.twitter.com/PE5h2qyth8

The way he stole each and every scenes with his elite acting! No one could have played Mir Farooq better than you! You deserve each and every appreciation for this! #1YearOfYehDilMera pic.twitter.com/WraUnTQIvn

Appreciation where due Adnan Siddiqui was a blessing to this project. His Mir Farooq Zaman increased the impact 100 folds. His equation with aina was so heartwarming but you still hated him. Brilliantly performed!#1YearOfYehDilMera pic.twitter.com/Dm6fG3sIrj

Fans were gushing over their wedding in the drama:

Yeh Dil Mera introduced me to Sajal and Ahad in a proper way! So, of course it'll always be special.#1YearOfYehDilMera

a perfectly woven intriguing story with a touch of romance, suspense and thriller! yeh dil mera is definitely one of the best shows of 2019-2020

The time I used to wait for Yeh Dil Mera every Wednesday… Yeah… Just like that.. Same Wednesday just different Shows!!

One year to this iconic dialogue!

Yeh Dil Mera Beautifully handled the issue of mental illness.. I ABSOLUTELY LOVED the way Amaan/Aina despite of themselves being mentally disturbed would really be their when other's mental illness would act up THEY WOULD LITERALLY LEAVE THE WHOLE WORLD ASIDE#1YearOfYehDilMera

Fans wanted to watch the drama all over again:

I WANA WATCH YEH DIL MERA FOR THE VERY FIRST TIME ALL OVER AGAIN, TAKE ME BACK TO 30 OCT 2019#1YearOfYehDilMera

The chemistry was electric!

A chemistry that in every sense sets the screen on fireee🔥
Amaina served us superior feelsy sahad content and we can never thank them enough! Its not just their offscreen equation but their onscreen brilliance too that helped to weave this magic.#1YearOfYehDilMera pic.twitter.com/PqUheP4VF5

Fans were also sharing the love the thriller received internationally:

The INTERNATIONAL recognition ydm got>>
After every ep YDM would trend in India Pakistan n Bangladesh alike. Critics frm the neighbouring countries couldn't stop gushing over this drama. It would top trp lists in Pakistan and UK every week! Talk abt Success🔥#1YearOfYehDilMera pic.twitter.com/3zq7l9CvfD

the way sajal and ahad performed this scene>> i mean THEY JUST BLEW ME AWAY
JUST PHENOMENAL
our industry is blessed to have such talented gems #1YearOfYehDilMera pic.twitter.com/rSgtUuUjqH

Here’s hoping to seeing the power couple in action soon! Did you love Yeh Dil Mera as much as we did? Let us know in the comments below!

Behind The Pen: Entertainment Journalists Who Write It Best About The World of Stars!

5 Things That Make 'Ek Jhoothi Love Story' A Web-Series That Will Warm Your Heart!