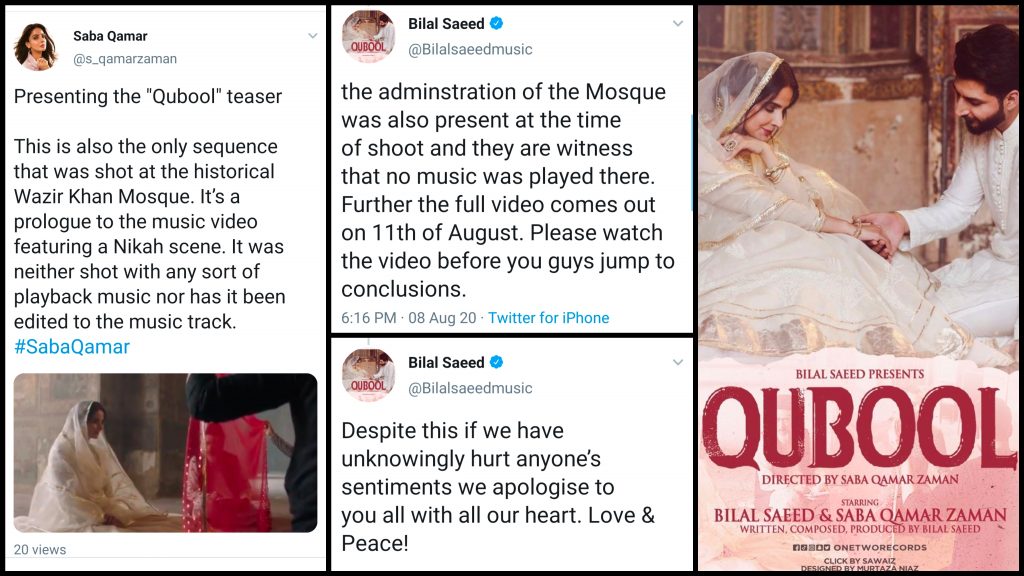 Saba Qamar and Bilal Saeed have been teasing us for a while now with their song ‘Qubool,’ which also happens to be Saba’s directorial debut and while they were at it, a BTS clip making rounds on social media has caught people’s attention:

People were furious at the two for shooting a ‘dance’ sequence, which honestly seems nothing more than a twirl. Even though both Saba and Bilal clarify in the description of the official teasers that the twirling sequence was shot without music at the mosque as an ode to celebrating the nikkah in the video:

This is really shameful act, they should be ashamed of doing this shitty dance in masjid. Does Islam teach us that? 😡
They don't know what the #Islam is! They are not Muslims,trust me.🖐️ #SabaQamar #BilalSaeed pic.twitter.com/xpyAuLIEgq

People were demanding strict action against the two:

Enough is enough!
We can not tolerate this. We demand strict action against Bilal Saeed and Saba Qamar.#BilalSaeed#SabaQamar pic.twitter.com/lZY6M5jViJ

Recording of Dancing scenes or music in Masjid Wazir Khan Lahore is a heartbreaking incident. We need to demand an urgent call of action against Media Production House, Saba Qamar and her Co-star and the management of Masjid Wazir Khan from top to bottom. This is Unbearable.

Officials were asked to look into the matter:

Strict action will be taken against ppl involved incl Admin

Mishi Khan too expressed her disappointment:

This act is extremely deplorable as they #SabaQamar & #BilalSaeed are celebrities who influence people
They shud have put their foot down as responsible stars. “Qabool hy”was a song not their real Nikah that they tarnished the religious sanctity of a renowned mosque. Shameful pic.twitter.com/BGPwmiBbWd

People expressed how they had zero tolerance for something of this sort:

Enough is enough!
We can not tolerate this. We demand strict action against Bilal Saeed and Saba Qamar.#BilalSaeed#SabaQamar pic.twitter.com/lZY6M5jViJ

Many found themselves comparing the situation to that of Turkey:

On the one hand, Turkey is looking at the history of Islam and Muslims in its dramas, and on the other hand, it is a shame to shoot a song in a mosque in Pakistan.#SabaQamar #BilalSaeed pic.twitter.com/qkMzwvhbqf

People had questions for others:

People were pointing out the hypocrisy of others judging them:

It’s okay for nikkah ceremonies to be recorded in a masjid, with a song later added to it, and all the new-couple stuff going on. But when artists do the same for their MVs then that’s WRONG? It’s not like they had the song playing during the shoot! #SabaQamar #BilalSaeed pic.twitter.com/UojuC7rEhc

people who are cursing saba qamar and bilal saeed for shooting a song in the mosque are the same who are planning their wedding shoots in Badshahi or Faisal mosque. lol

No I mean, Didn’t we normalise Nikkah photoshoots at Mosques? #SabaQamar #BilalSaeed

People wanted to know
And while many didn’t bother reading the clarification, others were lauding Saba and Bilal for their transparency:

wait so saba qamar just did a twirl in a masjid & they're CoNdEmNiNg the act? wait till they find out what maulvis have been doing to children reading the quran or what perverts do to women AT the site of the ka'aba. we really have no perspective of what a wrongdoing is do we

10 Contemporary South Asian Fiction Novels You Must Have In Your Library!

People Are Sharing Their Favourite Truck Poetries & They're Epic!