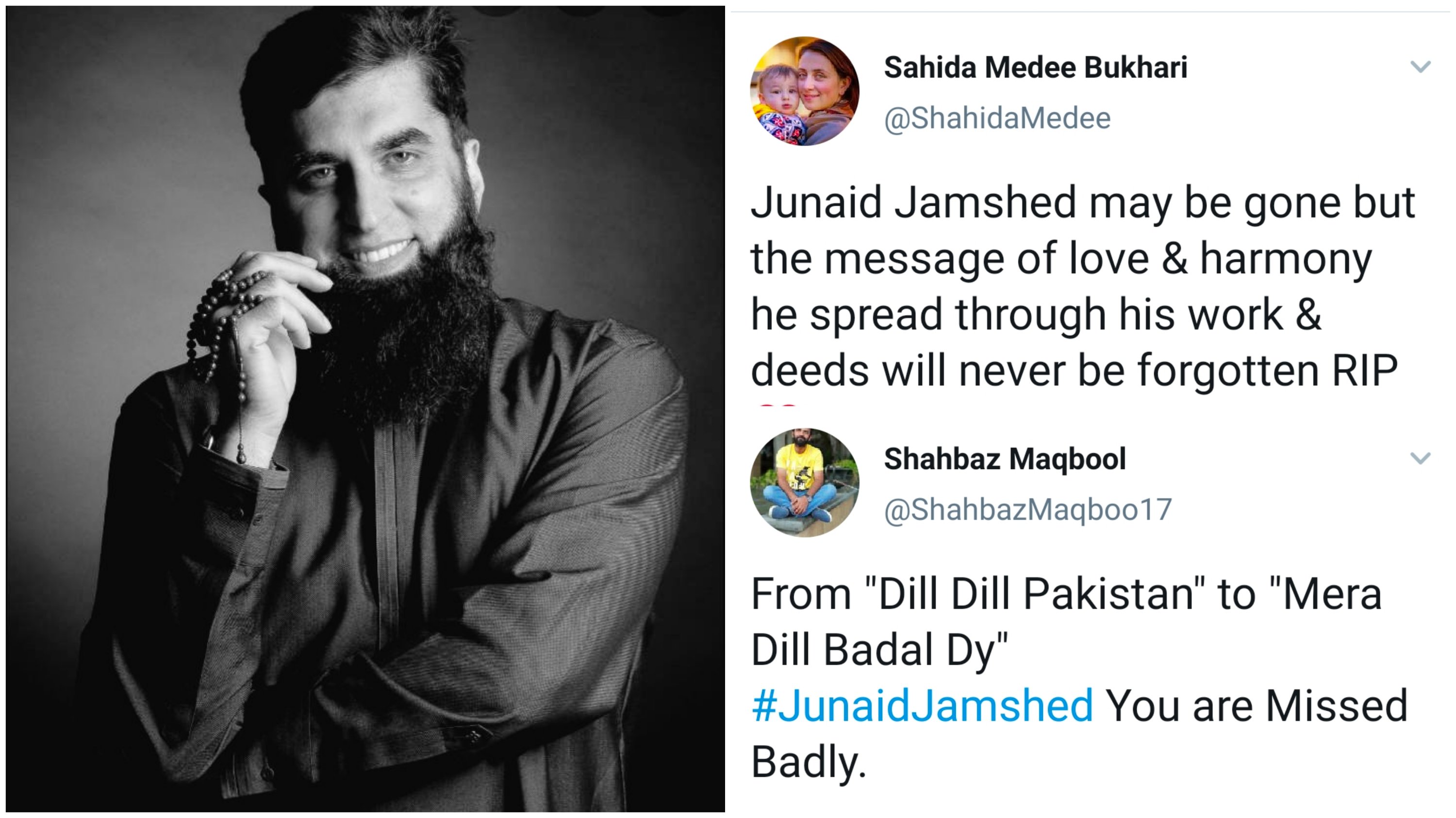 Today marks the completion of 3 years that a PIA plane met an unfortunate incident at Havelian, killing everyone on board including Junaid Jamshed.

With a loss so tragic, the internet is remembering all the ones lost in the crash:

An attachment too deep:

We, the MILLENNIALS who grew up with "dil dil Pakistan" had unique attachment with #JunaidJamshed
Even after quitting music, he couldn't cut himself off from "dil dil Pakistan" & people mocked him for that
He was a true PATRIOT
May ALLAH gives him higher ranks in JANNAH
Ameen pic.twitter.com/pZQtFX7BIM

And in every times ALLAH sends their man to prove that it's possible. #ایک_وقت_تھا #JunaidJamshed pic.twitter.com/awuLXMU8pW

Someone even shared how it was Junaid Jamshed who showed him the right path:

Today on his death anniversary, I want to pay my gratitude and homage to the great JJ who taught me the essence of "Haqeeqi Muslmaan", though I may not be able to do justice with my words, to how much of a great this man was, yet trying to commemorate him, in any little way I can pic.twitter.com/mRGjM0fCmr

Even the spokesperson of PIA called it a very challenging time:

Exactly 3 years ago, on 7th Dec 2016, PIA’s ATR operating on #PK661 crashed at Havelian. 47 people including #JunaidJamshed & all 3 pilots lost their lives. As Spokesman PIA it was personally a very challenging time. Still not sure what exactly was the cause. May Allah bless all. pic.twitter.com/H8y1YNYWFF

For some the wound was still fresh:

My heart as heavy as it was on that day back then. Tears just trickle down my eyes and the pain of heart is still the same. Every time I listen to you, look at your picture or clip tears trickle down my eyes unconsciously. I still can't believe you are gone.#JunaidJamshed pic.twitter.com/9jRYH3zexa

And remembering the legendary voice of #JunaidJamshed without posting dil dil pakistan is no short of a blunder pic.twitter.com/6JEw3EbdvC

He lives in our hearts!

A man is not dead while his name is still spoken…
Subhanallah the ''NOOR''#JunaidJamshed pic.twitter.com/NTQk6ReV0d

People were sharing how much they missed him:

Many were sharing how he taught them a lot:

3 years has been completed and still the pain of losing the greatest personality #JunaidJamshed is in the heart. This is the reality that we all have lost him but he had taught us many things about Allah and about our country.

May Allah Grant him highest level in Jannah. pic.twitter.com/8A5m840qyD

Ever since I had known him, he lived larger than life.

Junaid my friend, we have lost you but your message is still alive.#JunaidJamshed pic.twitter.com/AbqEINsAwQ

3 years ago today, #PK661 departed from Chitral & disappeared from the air control radar few miles short of landing.There were 47 people including 5 crew members on board the aircraft

Junaid Sir, you were an icon. You may have left but you shall not be forgotten.#JunaidJamshed pic.twitter.com/eMs87CrMZb

People were going back to Junaid Jamshed’s last tweet:

And the last picture he had taken before departing the ill-fated plane:

Never in my life there has been a week when I have not listened to the great #JunaidJamshed, His name, his songs reminds me of my teenage and young days of my life, The teenage crushes and his songs always went together…

Today it completes 3 years since we lost you Brother. pic.twitter.com/g0t8WXASzY

Many were giving him tributes:

My tribute to Junaid Jamshed is out now! https://t.co/FjD4b2k2GR

V’hv lived, grew up listening to a legend who left us 3 years ago on this day.His dil dil Pak,Na tu ayegi,ankhon ko ankhon ne,hv bn sang by all in teens & after, n then came Mera dil badal de, equally amazing. #JunaidJamshed still rules r hearts! A tribute to him frm this nacheez pic.twitter.com/MG0Csf9NH3

3 years since we lost this gem of a person! Miss you #JunaidJamshed bhai and your soulful voice. One of my favs was #dilbadalde pic.twitter.com/drDEPNSufA

Some were recalling his things changed for them when they learned about the news:

I just remember the day of 7 December 2016 it was full of joy and amusement for me since morning but after sunset it was totally change when i listen about his plan crash. May Allah Grant him highest level in heaven.#JunaidJamshed pic.twitter.com/3ZHNVo5Lvk

We all belong to & shall return to Allah 3rd death anniversary of late #JunaidJamshed #ایک_وقت_تھا pic.twitter.com/tq0WYGKfRU

May Allah grant him place in Jannatul Firdos. Ameen#JunaidJamshed ❤pic.twitter.com/f6MU5LwoH5

Have anything to add to this story? Let us know in the comments below!

PSL 2020 finalises squads and people are rooting for their favourite teams!

Emraan Rajput Adds Glitz and Glamour Into Menswear With Shalima at HBCW '19!