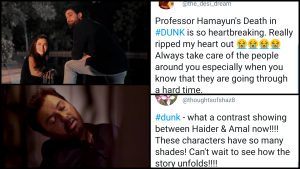 Drama serial Dunk, despite all the controversy surrounding it, has the fans loving it and last night it had the audiences shook after Professor Humayun’s suicide.

The way the drama showed two parallels of Haider and Amal’s dholkis versus Professor Humayun’s miseries was commendable and people are lauding it!

Professor Hamayun's Death in #DUNK is so heartbreaking. Really ripped my heart out 😭😭😭😭 Always take care of the people around you especially when you know that they are going through a hard time.

People were loving the execution:

THE LAST SCENE GOT ME GOOSEBUMPS!!! 😭💔
So well executed, yet so heartbreaking to watch! 🔥
Poor little girl, I feel so bad for Ghana everytime I see her!!! 🥺#Dunk #NaumaanIjaz #YasraRizvi #BilalAbbasKhan #SanaJaved pic.twitter.com/1xDlOmA7nw

People were eager to see what’s next:

#dunk – what a contrast showing between Haider & Amal now!!!! These characters have so many shades! Can't wait to see how the story unfolds!!!! #BilalAbbasKhan #SanaJaved @BadarMehmood01

People were in actual tears:

Nauman sir and his exceptionally thrilling performance, it moves you! 💘💘 It moves your HEART! 💘💘 I am still crying after tonight's episode. That little angel, imagine what she's going through. Imagine how his gorgeous wife is holding herself together! I can’t. 😭😭 #Dunk

People were loving the portrayal of Haider:

I still can't believe that he is the same guy who once portrayed the character of Qasim. His performance is always on some other level .#DUNK #BilalAbbasKhan #Rangreza pic.twitter.com/Kjl3rkiQKz

People were still making theories based off of what they believe:

#dunk is getting interesting. I think Haider is a positive character. Amal is making false allegation on professor. Haider is just trusting Amal. Haider's bro seems to be negative. He had feelings for Amal.

I also think Amal is really interested in Safeer. The expressions she was giving while talking to Safeer proves our point. #Dunk #BilalAbbasKhan #SanaJaved https://t.co/LAD4Ng42zn

People were living for the chemistry between Haider and Amal:

People were also lauding the little Ghana for her acting:

People were already calling it a masterpiece:

Dunk is not just a serial its sensation, Love of father for his daughter, trust of wife for her husband, intimacy of True Love and much more, Dunk is literally a Masterpiece💎#Dunk

People were sharing how the drama was based on the story of a professor who was falsely accused:

This drama based on MAO College Professor Afzal Mahmood who committed suicide despite allegations made by female student proved wrong after inquiry.
He wrote “I leave this matter in the court of Allah, The Police are requested not to investigate and bother anybody.”#Dunk pic.twitter.com/Hck64Lacpr

Ufff today's episode, Nouman Ejaz & Yasra Rizvi performance. My heartbeat was not normal watching the episode. This scene where Professor was talking about her daughter with Bilal. It made me cry. The feel and pain in his eyes. #dunk pic.twitter.com/A6ZhWE5psF

People were all-praise for Yasra Rizvi and her performance:

A big shout out to @YasraRizvi – the portrayal of her character in #dunk is absolutely OUTSTANDING! The frustration, anger and insecurities of a mother and wife have all been shown so clearly… Hats off!!!@BadarMehmood01

Nauman ijaz and Yasra Rizvi are stealing the limelight! Their scenes are treat to watch.#dunk

People were sharing why Professor Humayun decided to end his life:

@ijaz_naumaan as prof. Humayun played very well! U will be missed in next episodes! Prof. Taught us that a person can handle every neg situation coming from outside but one weird eye, one disheartening comment of ur loved one can destroy u from inside out. #dunk #BilalAbbasKhan pic.twitter.com/ZcYpfSu3NB

I can understand what situation Prof. Humayun was going through. The decision coming in his favour or against him wasn't gonna change the impact of it on his family. I wish he didn't commit suicide. It hurts to see good people ending their life like this 💔#DUNK

What did you think of the episode last night? Let us know in the comments below!

Netizens Are Furious After A Video Of A Kid Driving Surfaces The Internet!