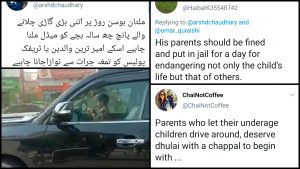 A video of a kid aged between 5-7 years has surfaced the internet where he can be seen driving the car alone, sitting on the driver’s seat without any assistance:

As the video hit the internet, it has upset a ton of netizens and they have a lot to say!

ZQ found herself at a loss for words:

Parents who let their underage children drive around, deserve dhulai with a chappal to begin with … https://t.co/6XhfdroZlr

Why would parents risk the lives of their child like this 😣 https://t.co/wSiwaW97hW

People wanted the parents to be held accountable:

His parents must be arrested, who so ever and should be fined heavily. https://t.co/69nkBznOY0

Parents should be charged with reckless endangerment.

Nothing heroic abt a kid risking his life and the lives of so many others. https://t.co/Dt0qXZ8ftB

People were calling it stupid:

People had their reservations:

Insanity – His parents should be kept behind bars and similar he should not be given drivers license utill he is 21 … who is responsible if he hits someone !!!

People wanted an FIR against the parents:

It doesn't make a sense to allow a child to drive a vehicle. It is a crime and illegal. Fir should be on parents.

His parents should be fined and put in jail for a day for endangering not only the child’s life but that of others.

People were calling it irresponsible:

This is really insane, it's really more than just being irresponsible.
The family doesn't even showing any care for their own kid, forget the ones around him
Strict action should be taken and make it an example for others
Why not charge them in attempt of murder? @TrafficMultan https://t.co/AQzWWoWMsv

People wanted to know how he was reaching the accelerator:

@arshdchaudhary I am sure his daddy didn't know this. No dad would put his son in such a risk. But how is he pressing the accelerator? https://t.co/gfkQa13fOB

Some thought it could have been a prank:

Cant be real. Must be prank or something https://t.co/eAmMHMpJfX

Is he coming straight from labour room?

Some turned it into memes:

Me running away from home when I drank a bottle of chocolate syrup and got my ass whooped for it https://t.co/ijFBavVX5k

What do you think about the video? Should the parents be fined? Let us know in the comments below!

National's Iron Is Literally The National Iron Of Pakistan & Netizens Have Proof!