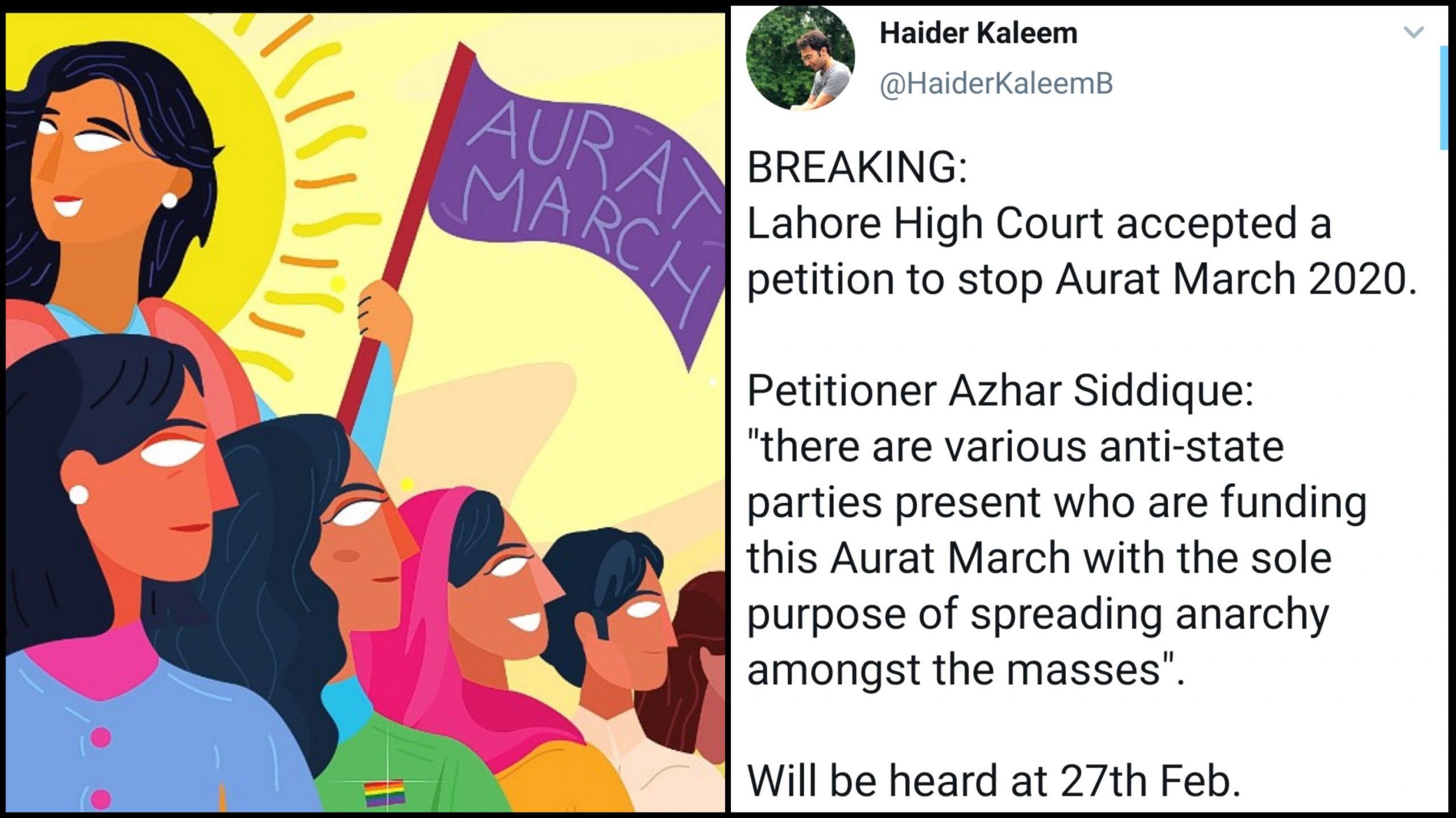 In an already patriarchal society, women of the country have been enthusiastically looking forward to the Aurat March 2020 which has been scheduled to take place on 8th March, marking the International Women’s Day globally. However, a petition to halt the march was filed by Azhar Siddiqui in the Lahore High Court who claims that the Aurat March is being funded by ‘anti-state parties’ and aims to spread ‘anarchy, vulgarity and hatred amongst the masses’. The petition also deemed the march ‘against the very norms of Islam.’

The petition accepted by the LHC has garnered a ton of criticism at the hands of the netizens:

THERE WAS A VIDEO OF A CHILD BEING RAPED IN MADRASA & this is what LHC decides to do – ban Aurat March. https://t.co/WnX2kBBkRO

People were also calling out on the LHC:

Lahore High court accepts all kind of trash like legit.
You’ve any bullshit, go petition there and you’ll win! https://t.co/uQzUx4UQoL

Thats how much the patriarchal society fear women standing for their rights.

Many called out on the system that treats women like secondary gender:

This is Pakistan. A country which treats us like a secondary gender. https://t.co/niyt5LP7K6

so women having a voice makes you uncomfortable? it's against our NoRms and spreads vulgarity but harrassing them, raping them, killing them in the name of honour, marrying them off at a young age is all normal and decent. How dare someone who isnt a man speak up?? https://t.co/eLnV6yDoPn

People were sharing how the country thinks that an Aurat March is a bigger threat than rape and other heinous crimes:

IsLaMic RePuBlic oF PaKiStaN aka where women peacefully marching for their rights and freedom are considered a bigger threat than rapists, corruption or every other crime known to mankind https://t.co/P71CM9yVSV

we're still showing up the dude can stop us himself 🤙 🤪

Many were furious with the freedom being taken away from them:

This is ridiculous! If someone doesn't agree with it, they don't have to attend it. Please stop taking away the little freedom we have left, weird-ass petitioners.

can't believe i'm forced to live in a country where women can't even express their sorrow and anger towards YEARS of oppression and injustice in a safe space. i am boiling with anger right now https://t.co/pKLT3CuHrl

Women were sharing their concerns and what it feels like to be a woman in this country:

can not BELIEVE this. aurat march, where women ask for rights, where women ask to be treated like HUMANS, is being banned but mard march wasnt? mard march where all those filthy men did was degrade women? this country will always be a horrible place for anyone who isnt a man. https://t.co/ydSFMWZXg9

Many argued how he should respect the demands of his fellow citizens:

Tell him to let the masses decided for themselves. He lives in democracy where free speech is a right; he needs to learn to respect the demands of his fellow citizens.

Some thought that LHC should get their priorities straight:

Oh ffs, Aurat march is the least if our problems, LHC should get its priorities straight.

Desi men at their best:

Desi men: “Feminists are so sensitive that they give petitions against TV shows they don’t like”

I guess we’ll never find out:

Hey I have a question for Pakistani men what’s it like having to live without a spine https://t.co/LQT189n4gL

Welcome to the Islamic Republic of Pakistan, where talking about your oppression and asking for rights is considered haram. What's not considered haram: beating women, raping children, murdering and throwing acid on women, burning women because they don't submit or heat food. https://t.co/BbxNNCLgRW

Some thought men were scared:

People were suggesting that the petitioner consults someone for his fragile nature:

Azhar Siddique sahb should see someone about his fragility issue

People were calling the country a joke:

Even the men were appalled:

I love how women asking for equal rights is equivalent to “spreading anarchy” in this country. https://t.co/hZ8zR9nff2

People were stressing on the fact that things like this make the march even more important:

This is so messed up. Now even the courts of this country can’t stand a woman speaking up? THIS IS EXACTLY WHY WE NEED AURAT MARCH. https://t.co/gOoHPLclV1

This only reinforces the need for the march. Good job guys! https://t.co/5Zi1wIYsTA

Men and their obsession with anti state and anti islam narrative. Wow, they are scared that this march might instill sum sense into women and they start seeing themselves as humans rathar than objects. #AuratMarch2020 bring it on ladiesss https://t.co/4YOLjuh9GH

It's just a petition for now, but since it's Lahore High Court you can't expect any reasonable judgement https://t.co/5mCjcg4wiz

What do you think about the petition? Let us know in the comments below!

Ehd-e-Wafa had us tearing up as the SSG boys come back to being their true selves!

10 Unique Pakistani Pairs We Would Like To See On Our Screens!