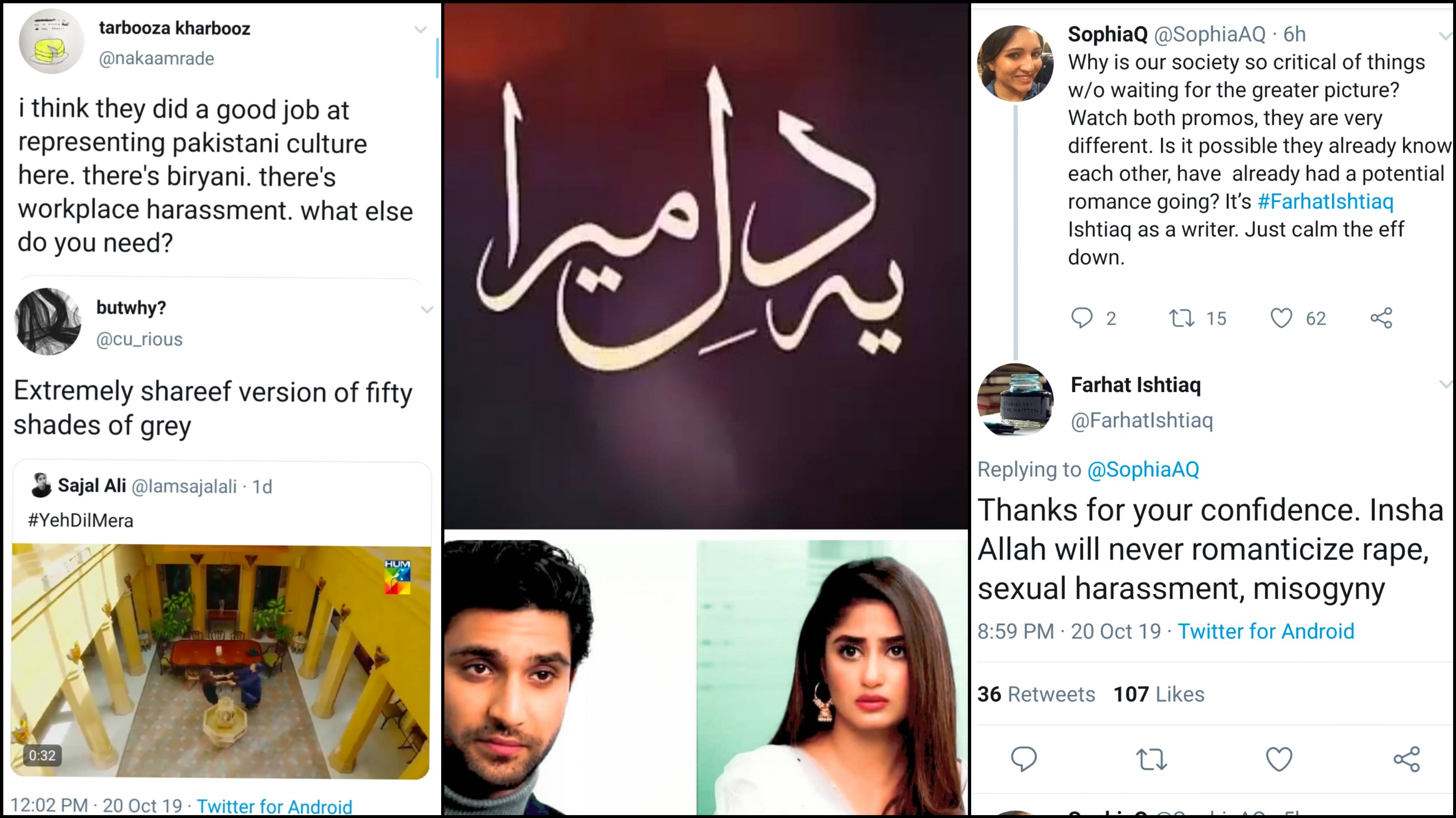 If you’re an avid Sajal and Ahad then you’d know that Hun TV released the first teaser for their new drama Yeh Dil Mera:

The romantic thriller written Farhat Ishtiaq, features Sajal and Ahad in the lead roles but the teaser has sparked controversy amongst the netizens who thinks it’s extremely problematic:

pakistani tv drama’s actually romanticise and encourage abuse and harassment instead of spreading awareness etc. i know i am not the first one to say this but fucking hell, what was this trailer? @Iamsajalali @ahadrazamir guys do better.

People found the story line to be toxic:

Do Pakistani drama writers realize how toxic their storylines involving a rich, young boss romancing with his middle class employee can be for a society battling for safer workplaces?

I swear to God, these dramas are so toxic. What's the appeal of them, I will never understand. Sajal actually played a ra*e victim in one of her serials, ye kya chuss mari hai abhi? They should do better.

10 points for the shade!

i think they did a good job at representing pakistani culture here. there's biryani. there's workplace harassment. what else do you need? https://t.co/6WuejcsCGP

People were expressing their disappointment with Sajal and Ahad:

We all knew the TV writing in this country had declined but not to this point. I’m disappointed Sajal and Ahad – who are so talented – would take on such vapid roles and romanticize sexual harassment in the workplace. https://t.co/EOKNOE65oC

Some were curious about the wardrobe design:

Please let me know who inspired you to wear Jhumkas and Gota lined dupattas for a corporate interview?
Genuinely curious! https://t.co/dvXvbYP4Sc

A girl came forward to share how workplace harassment is no joke:

I had a stalker at work. He was in another department, his desk opposite to my neighbour's. He would keep staring. I was on my break year after A levels and had ZERO exposure. I ignored until he sent me requests on ALL of my social media including linkedin. Told my boss… https://t.co/IRRbcTiTB1

They changed his seat. The situation continued. He'd follow me to the lift,so I started using the stairs. Told my female boss who was empathic, asked me if I wanted to formally complain. I didn't. He was married and Id cost him his job. Workplace harassment is NOT entertainment.

People shared how they felt the teaser normalises workplace harassment:

thats how you normalize harassment in office by employers 🙂 https://t.co/6MJYa8Z0nQ

This interview irl qualifies as sexual harassment. Kindly don't encourage this crap. Expected better from the likes of @Iamsajalali and @ahadrazamir https://t.co/PKjbCIcjr7

Some reminded how this was criminal offence:

Behen, are you okay? Sexual harassment is not kosher. An employer who acts like this during interviews, deserves the business end of a high-voltage taser. This is not acceptable behaviour, this is a criminal offence under Section 509-Amended. The fuck is wrong with these people?! https://t.co/Dw1AlGkGWd

People were pointing out everything wrong in the teaser:

Oh boy. So much going on here. She's dressing up in trousers before the interview but goes dressed as a behn ji with jhumkay and a hairstyle fit for an evening date. Employer is a grade A tharki asking inappropriate questions that she should've walked away from without answering https://t.co/v7fv5EK6NN

OMGGG I CANTT SAJAL AS ANASTASIA AND AHAD AS MR GREY OMGGG 😂😂😂😂😂 https://t.co/vkYFwaVnlD

People were not liking the script at all!

Once i gave an interview to this man, who with his talks didn't make me feel comfortable.. Dude i never looked back at that job. Also.. Itna shitty script and content??? Aapa Sajal or Ahad me agy nikal gaen bohat https://t.co/AnYjl6HthT

Some just wanted to talk to the design and wardrobe team:

Just watched the trailer of new Drama of Ahad Mir & Sajal. Who is the Costume Designer? Cinematographer? Director?
I want to talk. Hire me for better concepts? @ Drama Industry.

Ummm what on earth is this.
A boss openly hitting on the candidate he's interviewing for a job, and that's supposed to be romantic?

This is harassment. When will our TV dramas stop normalising this crap? https://t.co/DaZ9hapTqw

Hamna makes a valid point. Sajal & Ahad are great together, but the content is worrying. 1 because as she points out the potential boss coming on to the applicant & 2, because women with career ambitions or talent shouldn't have to put up with such advances. https://t.co/8uiwkFk5NA

And while many were pointing out how problematic the teaser seemed, there were a few who thought it was too early to judge the storyline from just one teaser:

It's just a drama & you have ONLY seen a promo. please wait a little more before criticising & this employee won't be any middle class girl so yeah please hold your horses for now. https://t.co/yrl5xwdy9A

People had their trust in Farhat Ishtiaq and her writing:

This show is written by farhat ishtiaq! Can you all wait?? https://t.co/e8zP6Z2nUE

Some accused others of selective criticism:

Okay I have nothing against the fact that people are sharing their opinions over here but learn to be fair when stating anything. Jo khud ko pasand woh entertainment jo nahi pasand woh inappropriate. Keep your selective criticism to yourself. THANKS.

Some pointed out how Farhat Isbtiaq’s teasers are misleading:

farhat ishtiaq’s plays are NEVER what the teasers seem to be. the scenes are always presented in a misleading manner.#YEHDILMERA

There were some who were excited:

Hoping the story is different than the trailer. Dont want to be disappointed by Ahad and sajal. #YehDilMera https://t.co/CshMb6I2tD

Many didn’t find it as problematic as others made it seem:

Wese not because i like sajal and ahad, but the teaser of their upcoming drama is not that problematic how you guys are interpretating it

Many came forward to argue that a few seconds weren’t enough to judge:

Wese not because i like sajal and ahad, but the teaser of their upcoming drama is not that problematic how you guys are interpretating it

People also mentioned how there might have been romance budding between the two already:

Why is our society so critical of things w/o waiting for the greater picture? Watch both promos, they are very different. Is it possible they already know each other, have already had a potential romance going? It’s #FarhatIshtiaq Ishtiaq as a writer. Just calm the eff down.

And the writer Farhat Ishtiaq herself clarified that she will never romanticize rape, harassment or misogyny:

Thanks for your confidence. Insha Allah will never romanticize rape, sexual harassment, misogyny

She also promised her fans how she won’t let them down:

Thanks for your trust. Will never let you down

What did you think about the teasers? Are you excited for the drama? Let us know in the comments below!

Director Jami reveals he was harassed by a media giant