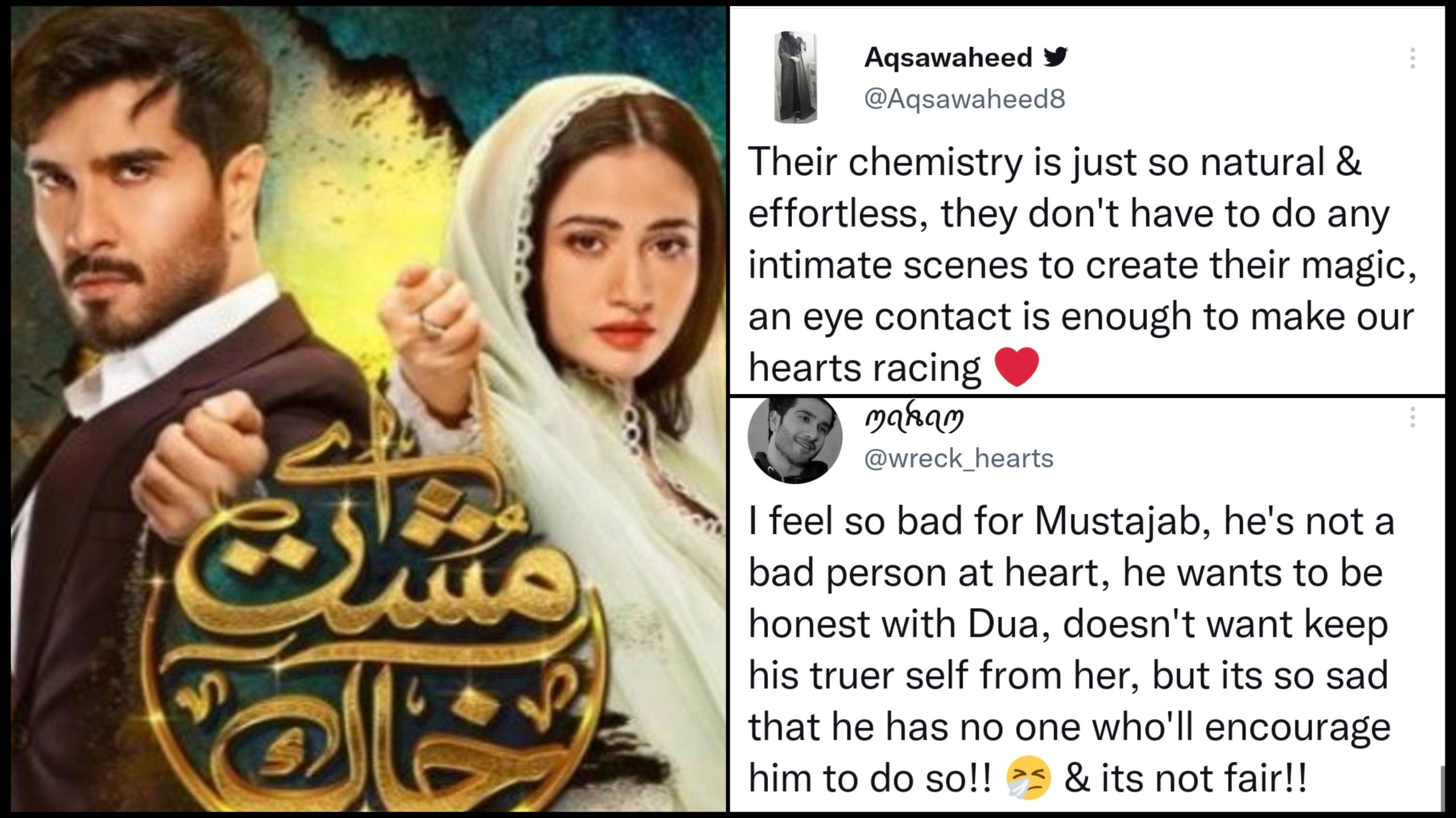 Drama serial Aye Musht-e-Khaak has been a hit ever since the first episode was aired. And as the story is now progressing to Dua finding out Mustajab’s true side and Mustajab being astray, and last night’s episode left everyone in awe as fans made it a top trend on Twitter:

And here’s what people had to say:

This scene was so cute,the way he just holds her head😭🥺🤣❤️✨

lol….he didn't knew about that fake heartattack… he's not that evil as we all are assuming him to be.😭😂 he can be one in future tho! but as of now he had no clue about this. #FerozeKhan #AyeMushtEKhaak pic.twitter.com/1t2FWyPjNw

People who were initially making memes had a change of mind:

Today's episode is sooooo good and precap🔥🔥🔥🔥🔥🔥 those who were creating memes keep doing bcz my mutuals started watching it now after them and now is genuinely loving the story and drama also galaxy lollywood ko shoutout for Such kind words for #AyeMushtekhaak in review!💗

Just Dua playing with her husband’s ring, the way she loves being in his vicinity and melts at his gazes. Mustajab you love her, please see that how much she loves you in return 🥺❤️.

He’s not a bad person!

I feel so bad for Mustajab, he's not a bad person at heart, he wants to be honest with Dua, doesn't want keep his truer self from her, but its so sad that he has no one who'll encourage him to do so!! 🤧 & its not fair!! #FerozeKhan #AyeMushtEKhaak pic.twitter.com/kZze7XHZoi

I felt so bad for Dua here, I mean how humiliated she must've felt here!! 💔
But I also fear the day Bobby's gonna regret his words, his actions, I don't wanna see him breaking 😥#FerozeKhan #AyeMushtEKhaak pic.twitter.com/xYFKOlLoRM

No one but only Feroze can play Mustajab!

Their chemistry is just so natural & effortless, they don't have to do any intimate scenes to create their magic, an eye contact is enough to make our hearts racing ❤#FerozeKhan #SanRoze #AyeMushtEKhaak pic.twitter.com/zs9Qb60Vll

And he suspects Dua behavior being weird as he doesnt know she overheard his conversation with his mother 👀 #FerozeKhan #AyeMushtEKhaak pic.twitter.com/yFOVuP1Zl7

Are you keeping up with the drama? Let us know in the comments below!

5 Reasons That Make Ruposh A Telefilm To Remember For The Ages!