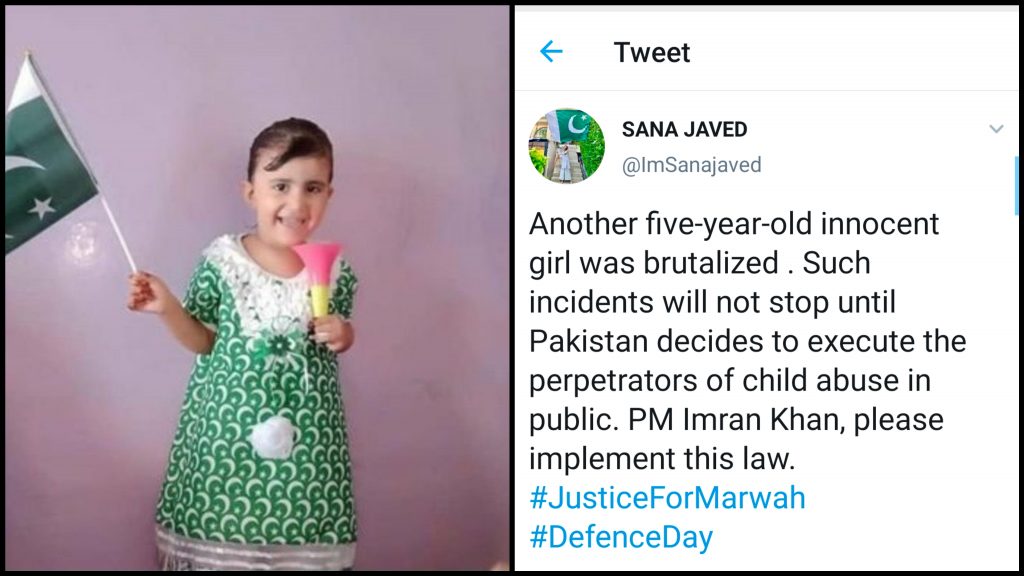 5 year old Marwah’s body was found burnt in a garbage can, reports also proved that she was raped before being burnt to death. According to sources, the young girl named was kidnapped on Friday and remained missing until her body was discovered yesterday.

This barbaric incident has shaken people to the core and they demand nothing but justice for Marwah:

Another five-year-old innocent girl was brutalized . Such incidents will not stop until Pakistan decides to execute the perpetrators of child abuse in public. PM Imran Khan, please implement this law. #JusticeForMarwah#DefenceDay pic.twitter.com/UznE5Ci3Sd

Actress Armeena wanted to know when such heinous acts will stop:

Raped and burnt. I’ve seen the image and it is beyond HORRIFIC. When will this stop?! #JusticeForMarwah pic.twitter.com/ZWmrABRAd0

Veena Malik demanded that these paedophiles be hung publicly:

Pedophiles must be hung in front of people. It'd be the best prerequisite for stopping this sort of obscenities. Authorities are requested to take notice seriously. We've lost patience. We don't want these blooming roses to be plucked.💔
⁦#JusticeForMarwah

How many children will it take to stop this barbarism?

When will we implement this? To be honest fed up of these trends bcz we can only tweet and raise voice against this but Government has to take action on it after Zainab's incident we thought we won't see such cases in future but unfortunately we were wrong#JusticeForMarwah pic.twitter.com/eS13qDbFWT

The Day Will Surely Come When The Killers Of Those Innocent Girls Will Be Hanged In Public
Inshallah ❤️#JusticeForMarwah pic.twitter.com/B6dZxKTMPo

People had lost faith in humanity:

After every shamefull Child abuse & Murder act I use to think that This is the worst & Peak level of brutality but every next act is more Heart Wrenching & Painfull !

People were short of words to express what they were feeling:

Another day, another story
A six year old girls Marwah from Karachi was kidnapped two days earlier she was raped, Killed and her body was burned after that,
How can Animals like that part of our Society, I am Speechless 😭💔#JusticeForMarwah pic.twitter.com/QJ0QvYeYJ0

No one deserves this, absolutely no one!

This innocent soul was raped and burned to death, it's heart wrenching to see innocent children getting raped every other day and still our government can't do anything.
THESE CHILDREN DIDN'T DESERVE THIS SOCIETY 💔#JusticeForMarwah pic.twitter.com/XeVhtVoS8u

People were requesting the PM to make public hanging a thing:

Another five-year-old innocent girl was brutalized . Such incidents will not stop until Pakistan decides to execute the perpetrators of child abuse in public. PM Imran Khan, please implement this law. #JusticeForMarwah#DefenceDay pic.twitter.com/PEMbaJVAwH

Seriously have no words 🤦‍♂️ @ImranKhanPTI sir is this your Riasat e Madina you promised for everyday we hear these tragic news don't do anything in next 3 years but plz at least do something in this regard make these morons terrible examples #HangRapistsPublicly #JusticeForMarwah pic.twitter.com/9eE8xXif9S

TW: Rape/Death
This little girl from karachi was abduction, raped and burned to death.
So were the clothes at fault or was she provocative?
There's no justification to this.
There can never be a justification to rape or harassment or assault.#JusticeForMarwah

People were worried for children:

This is the Islamic Republic of Pakistan that was promised? Either they are boys or girls our kids are no more safe in this country. #JusticeForMarwah https://t.co/BchQKpgss4

Tired of using these hashtags. Why are we heartless? Why @ImranKhanPTI and Parliament doesn't approve public hanging of rapists? Why why why????@Ali_MuhammadPTI#JusticeForMarwah

Why we don’t hang the rapists to death? Why we have to trend new hashtags every other day for cases? Is there any leadership and judicial system in Pakistan? Is anyone really getting justice or the rapists and pedophiles are just free to do whatever they want? #JusticeForMarwah

The increase in child sexual abuse cases is worrying. The government's silence is criminal negligence. The culprit should be arrested as soon as possible and punished#JusticeForMarwah pic.twitter.com/ftSOYo4eqE

People demanded that everyone involved in this heinous crime be caught!

People who are involved should be hanged in public.This little girl was kidnapped and raped before being murdered and torched. She was reported missing from the Old Sabzi Mandi (Karachi) area two days before her body was found in a trash heap #JusticeForMarwah pic.twitter.com/eldoRPUeHh

5 Contemporary Pakistani Athletes You Need To Know Apart From Cricket!

5 Pakistani Singers Who Made The Country Proud On The Global Stage!