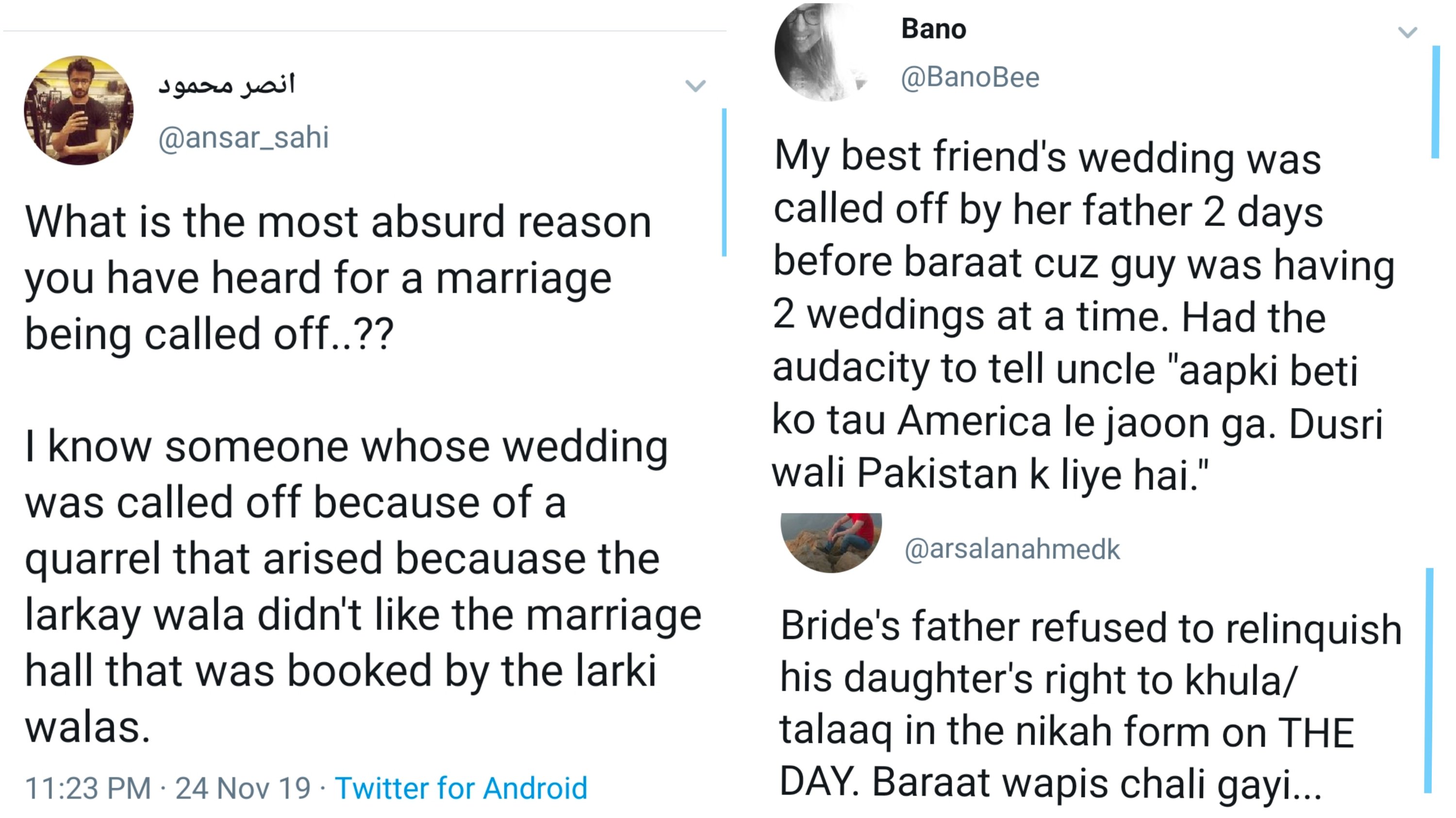 In a society where marriages are already very hard, this guy asked people the most absurd reasons they’ve seen for weddings being called off. He started with an incident he witnessed himself:

What is the most absurd reason you have heard for a marriage being called off..??

I know someone whose wedding was called off because of a quarrel that arised becauase the larkay wala didn't like the marriage hall that was booked by the larki walas.

And the reasons people gave will make your blood boil!

On mehndi day the groom's parents asked for a brand new Corolla Altis for their son or they'd call off the wedding🙃
The father of the girl said ok call it off.
That was a huge event.

Was hoping this was sarcasm but this actually happened, the wedding didn’t get called off though but saada rukhsati!

Good thing it got called off, the audacity!

My best friend's wedding was called off by her father 2 days before baraat cuz guy was having 2 weddings at a time. Had the audacity to tell uncle "aapki beti ko tau America le jaoon ga. Dusri wali Pakistan k liye hai." https://t.co/DABsVDRLSY

They demanded a house! An entire house a day before the wedding, tch tch!

My cousin's in laws demand on mehndi day for home( larki k nam registry kro Aj he warna shadi cancel) but marriage was not called off. They have to do it ( log Kia kahen gy k shadi kiun cancel hui)

Girl’s phuppo asked about the guy’s work/finances. Losers got offended and called it off. Frankly I don’t think girls phuppo had any business asking but calling it off over this was simply bizarre

Happened with a friend of mine. The girl said to her parents that she won't get married unless the guy (my friend) shaves his beard. My friend refused to shave, and the wedding was off. All happened after the engagement. BTW, my friend had a short beard, not the long n thick https://t.co/qzAZEGAuEy

my friend's brother was called off because of dowry.
Larkay walaz returned jahez on day of menhdi and had audacity to send Mehndi ka jora and all other things with it.
Sham ko larki walaz called the boy and said..hum tum jese ko apni beti ka nakhun b na dein.
😜 https://t.co/Aun7yIsSQq

Bride's father refused to relinquish his daughter's right to khula/talaaq in the nikah form on THE DAY. Baraat wapis chali gayi… https://t.co/pT8lGf4JJV

Recently happened: a couple (together for about 2 years) was getting married. Saturday ko shadi ke functions start honay thay, Friday ko Nikah tha.
Nikah pe she said divorce ka haq chahiay.
They said no.
Argument hui.
They left. Wedding off.
He hasn't contacted her since.

I heard about two local families who had an argument over the dessert menu for the reception. They called off a wedding because someone wanted to eat halwa instead of fucking ice cream. https://t.co/Z2126KrwE6

I heard this story about a friend's colleague:

Nikkah was done few months before wedding events. Then for wedding events larkay wale were arranging walima in Dubai, larki wale wanted them to arrange it in Europe. The families didn't agree on it, ended the nikkah. https://t.co/1utzDCXdbB

Don’t even know what to say here…

My cousins' (both bride/groom arr cousins) engagement was called off, because 1. Groom bought his mom and sis gold gifts, bought only clothes for larki nothing gold.
2. The clothes were not bought but infact were old clothes of his sisters that were revamped 🤐 https://t.co/iwfzIqSNP0

The girl's brother had an affair with the boy's sister.

One on the people I met told me his wedding called off twice with two different women because his friends "accidentally" uploaded a picture of him rolling a joint in the background…… TWICEEE https://t.co/g9fiRQsnPq

Haq Mehr.. it wasn't a lot the larki walay asked, that too ghee muajjal, but the groom's side only wanted to give the typical ten thousand rs etc https://t.co/fNnrYl9OTo

My best friend's engagement of 4 yrs were called off because someone told larka waley my friend has a green card bf. She Is married now to a very decent non green card person 😂 https://t.co/iwfzIqSNP0

Many were appalled at the reasons:

Read the replies under this tweet.
What's wrong with DESI FAMILIES??.
THAT'S WHY I AM AFRAID OF GETTING MARRIED https://t.co/6gbzhz792e

What’s the most absurd reason you’ve ever heard of? Let us know in the comments below!

What happened between 5 Pakistani cricket players and an Indian taxi driver is the best thing you'll come across today!

Vlogger Alyne made a video on Pakistan and it did not go as expected!