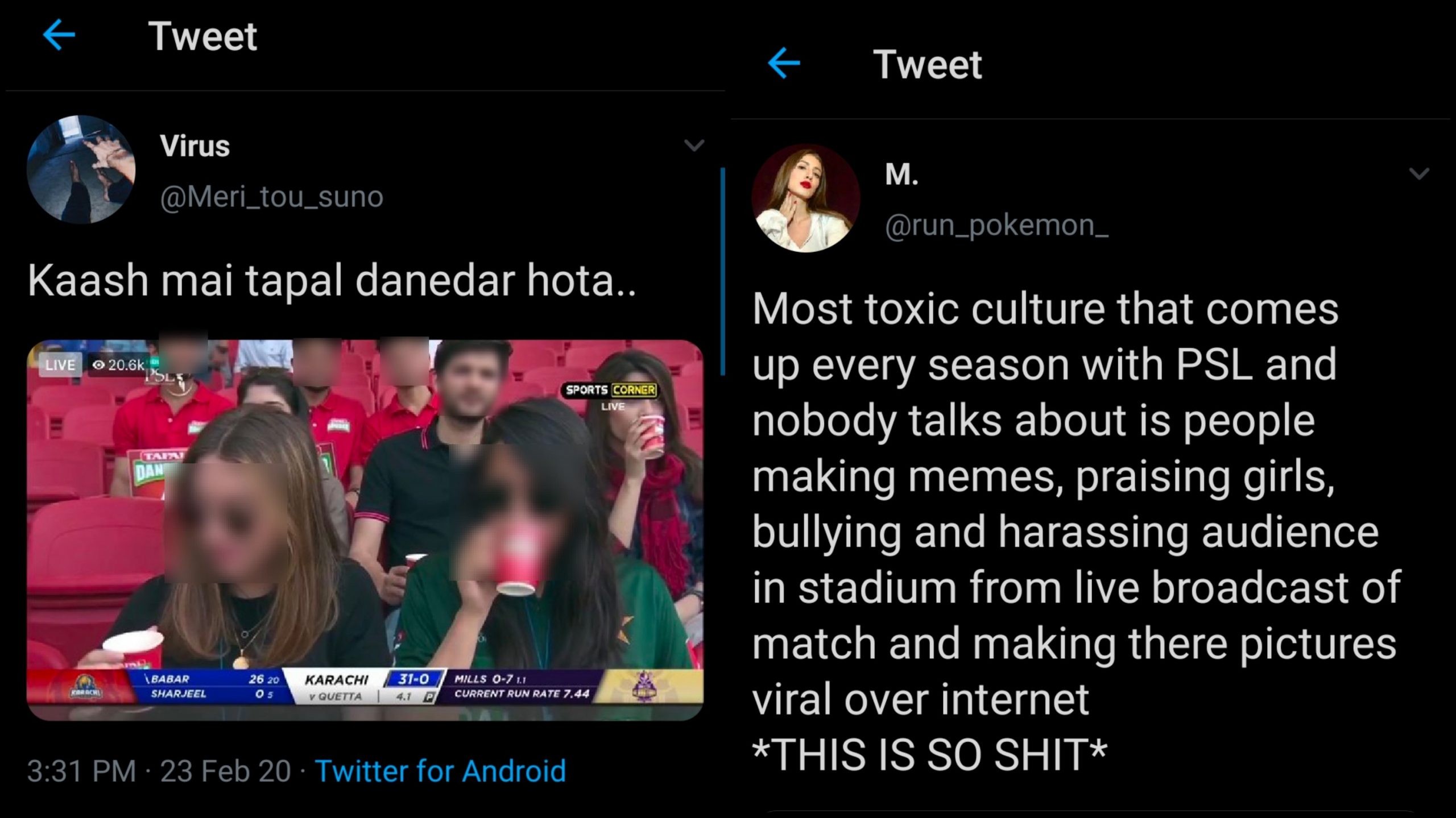 Imagine going to attend a match and having a good time, only to come home and realize that your pictures have been circulating on social media with the creepiest captions, that’s PSL for girls. In am already toxic society, this perverse behaviour is the last thing we need.

Ever since PSL has begun, there have been an array of thirsty tweets popping up with every match, and the netizens are sick of it!

PSL season is a constant reminder of how tharki (and proud!!) pakistani awam really is

People have been sharing absolutely crass tweets about the women in the stadium:

From colour to pigmentation, no one was spared:

But the bar was lowered from bachi to maal immediately in the very next tweet:

Sick of the toxic tweets, the netizens made it a point to call out on everyone who was involved:

Most toxic culture that comes up every season with PSL and nobody talks about is people making memes, praising girls, bullying and harassing audience in stadium from live broadcast of match and making there pictures viral over internet
*THIS IS SO SHIT* https://t.co/eibWav5O0G

Anyone posting pictures, without permission, of girls and boys watching PSL matches, should be in jail.

People made sure they came back with solid facts!

It's called hyperpigmentation and half the country has it on various parts of their bodies. pic.twitter.com/pUXRIHdwOV

People were upset that they can’t even enjoy a match in peace:

Ever since PSL has started, there are pictures circulating of girls as well as boys sitting in the audience with thirst/desperate captions on it. How low our people can go? People can’t even watch a match in peace? Is this Islamic republic of pakistan?

Some spoke from their personal experience:

I asked my sister if she wants to go watch PSL and she said she doesn't want her picture with wierd captions on the internet and I felt that. She is a crazy cricket fan and she can't enjoy it in the stadium because of creeps like this https://t.co/J6CGZw8I4d

Many suggested that the PCB management should set some ground rules for the camera men and the spectators:

Social media is a power to you but the trend of sharing pictures of girls from the PSL crowd with an unethical caption is not a good thing.@TheRealPCB should make some rules for cameramen and the social media users should also behave.
Otherwise the consequences can be fearful.

People were appalled at the open harassment:

You know your countrys in shits when men start openly making jokes about harassment. Or openly harass I mean…. https://t.co/NFLmjBh4Vj pic.twitter.com/bZFa9IbcYr

People were feeling sorry for the women:

Think about going to stadium with your family and camera man caught yall in the frame nd when you get back home your mother, sisters pictures revolving on internet with such captions… You guys are shitholes tbh… https://t.co/ea0wgp35f3

Imagine going to a match to watch cricket and someone posts your photo calling you a cute bachi https://t.co/2gwLeRm8Hl

Please refrain from posting girls pictures from PSL matches. It is really low, grow up. #PSL5

It's disgusting to share people's photos with these remarks. https://t.co/Ac6wsMIJnA

It had many believing that men are trash:

Day by day we keep proving how men are trash. Pathetic and disgusting https://t.co/pPbKqP8KM8

Literally the worst thing to witness:

woman bringing another woman down on social media is the worst thing to witness https://t.co/DBBQRDKCEk

Girls were sharing how they would hate to have their pictures circulated like this:

Stop being a fucking creep. I’d hate my picture being circulated around with weird captions and so would any other girl, including your family. https://t.co/EV2yIuYnQ3

Things people do for attention:

First he shows what a low life he is n then he enjoys the fame. Such is this social media. Exposing others has its cost. https://t.co/lByKEDHtoM

This is why Pakistanis don't deserve ANYTHING. You get good entertainment, you make fun of people. You get VIP sections, you encroach them and make life hell for everyone.

You're the scum of the scum. Ashamed of people like these, 90% of whom make up this "nation". https://t.co/z9uD9PtZXj

Many just wanted to put an end to the toxic meme culture:

Some had legit concerns:

Keyboard jihadi quote RTs it with a moral lesson: 600+ RTs

How is this helpful to the girl whose photos are being shared?

And while many tweets are still out there, one of the guys who circulated a girl’s picture earlier took it down and apologized:

What do you think about this toxic open harassment culture? Let us know in the comments below!

10 Unique Pakistani Pairs We Would Like To See On Our Screens!

After the petition against Aurat March, women really want you to know why they want to march!