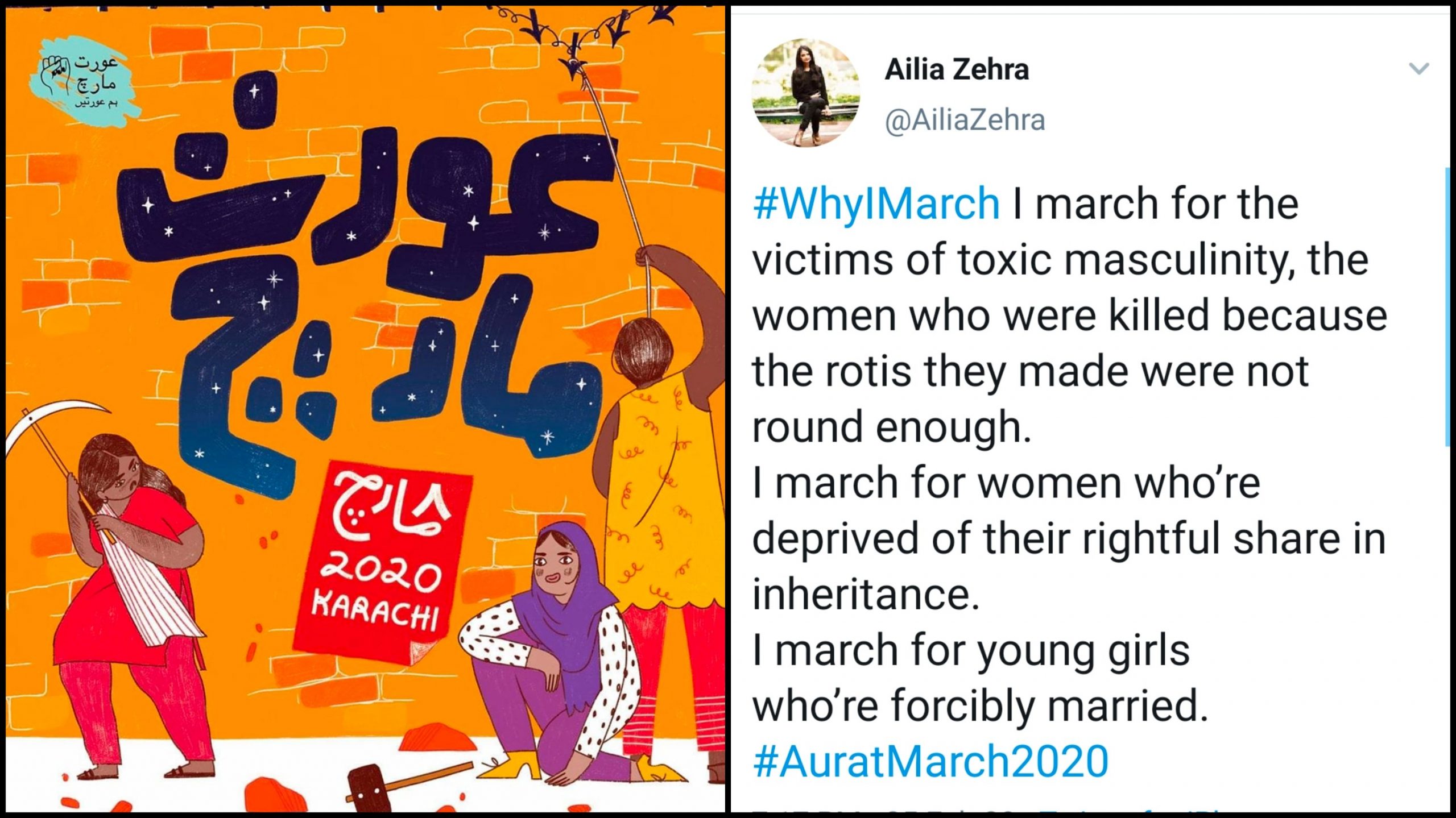 With the future of Aurat March being tainted by a petition that deems it against the Islamic norms, women from all walks of life babe come together to let people know their very reasons for the march.

With the hashtag #WhyIMarch trending on Twitter, their reasons might change the way you look at the Aurat March:

If the expression of our oppression is bothering you more than “rape news” every week. That’s exactly why I need to march. #WhyIMarch

Some shared how unsafe they feel alone in public:

Some shares how they were marching for all the kids who are violated:

I march for every little child that is violated in the premises of their home, their school, their madrassah, every place that should have been safe for them. #WhyIMarch

For many, it was their chance to stand up for themselves:

Even men who support the match we’re sharing why this was so important:

#WhyIMarch is because I want my sisters to at least be treated equally, if not better than I have been treated all my life. To allow them to grow in an environment where they are not scared to grow. To allow them to walk with their heads up high, not facing down and to feel safe.

For some it was against all forms of harassment:

#WhyIMarch because every single woman i know has been harassed, molested or taken advantage of.
my uncle harassed my sister when she was 16 and she was told to keep quiet about it so that my uncle's (who is considered a religious, pious person) image doesn't get tarnished

Some are marching because it’s about time that men stop getting away with everything:

#WhyIMarch because my abuser is still on campus and faces no consequences. Gets away with it. And I have to live with it and be fully functional and pretend like it never happened while I am forced to see him every . single . day . #AuratMarch2020

When you are sitting just remembering your childhood. everything about it. and you realise you have been touched wrongly by different men. men who knew they will get away with it. Men who were old enough to know what they were doing. This is #WhyIMarch for women. for freedom.

People were sharing how it was about incidents like these that the march is so important:

#WhyIMarch because my 16 year old cousin has been engaged to a 30 year old man and no one in my family bat an eye. #AuratMarch2020

For some it was about the safety and financial inclusion of women:

For some it was about being treated with respect:

When my sister asked her male classfellow to stop referring girls as "bachi" he said, "tou or kia bolain phir, Randi?"#WhyIMarch because men only think of us as objects of their pleasure.

People were sharing how it’s time people stop thinking of women as rehabilitation centers for their sons:

#WhyIMarch because women are not rehabilitation centres for badly raised men. #AuratMarch2020 pic.twitter.com/8WpCCSqqtW

For some it was about the internalized misogyny:

TW harassment, rape#WhyIMarch because when /my/ room got broken into by a man I had absolutely zero connections to who had been keeping an eye on my house and almost raped me, my grandmother told me that it was /my/ fault for wearing shorts to bed.

Some were marching for fertility rights:

I want women to have fertility rights. Where they are not forced to produce a child after a child consequently endangering her life, that's #WhyIMarch.

For some the agenda was marital rape:

I march for all the victims of marital rape who are not even considered victims in our society.#WhyIMarch

Some were doing it for their voices to be heard:

#WhyIMarch because after a subcontracted female janitorial staff member was sexually harassed at my campus, she and all the female eye witnesses were fired from their job by MBM for reporting the harassment and raising their voices.#AuratMarch2020

For some it was time that women spoke up for themselves instead of being treated like objects:

I don't want the women to bear the brunt of the sins men in their surroundings commit. #WhyIMarch

Some were marching because harassment needs to stop!

For some it was the first step to scoring a better future for their daughters:

#WhyIMarch is because our daughters will not face what we did. they will not internalise their pain. they will not be denied opportunities. they will walk the streets without being scared and they will stand tall and mighty because thats what we envision for them. #AuratMarch2020

Some were marching because they can and for several reasons:

I march because I couldn’t before, and so many can’t still.

I march for the women who were murdered for not delivering a hot meal to their lazy husbands.

I march for the survivors of sexual assault. #WhyIMarch #AuratAzadiMarch2020

Many were marching because it’s their right:

#WhyIMarch because my constitution gives me the right of association and assembly; freedom of speech and movement. It says I am equal.

#WhyIMarch
Because misogynists live in an illusion of peace bestowed by their privilege. Because Aurat Azadi March gets more hatred than domestic violence, acid attacks, honour killing, rape and sex trafficking. #AuratAzadiMarch2020

Some were marching to reclaim public spaces:

#WhyIMarch I march to reclaim the public space which has long been occupied by men. These roads belong to women as much as they belong to men. A woman walking alone is not ‘asking’ to be cat-called! #AuratMarch2020

Some were marching for the double life they had been living:

#WhyIMarch because a desi household for a girl is nothing short of a prison. because of the constant monitoring that makes me soffocate. because of all the opportunities i deserve but have to miss out on. because i have to constantly live a double life and hide so much of myself.

For some women were much more than gol rotis:

Salma was 9, her father strangled her to death for not making him round roti. She was learning, she was too small to have learnt making round roti. She deserved life. #WhyIMarch https://t.co/hYhtxblpso

Some were marching for inheritance rights:

#WhyIMarch I march for the victims of toxic masculinity, the women who were killed because the rotis they made were not round enough.
I march for women who’re deprived of their rightful share in inheritance.
I march for young girls who’re forcibly married. #AuratMarch2020

For some the agenda was to stop honour killings:

#WhyIMarch because the concept of “honor”is so fucked up that if a girl does anything she wants its enough to kill her.because i dont know what happened to the girl from my village who made the mistake of marrying someone she liked.because she’s dead nkw and no one talks about it

Some were marching because girls deserve to put their degrees to use:

#WhyIMarch because my most brilliant students are always girls and I also know that after graduation only a few of those girls will be "allowed" to persue their careers and dreams. #AuratAzadiMarch2020

With so many women putting forward their reasons for the march, what do you think about the petition field against it? Let us know in the comments below!

People are sharing pictures of the girls in stadiums with demeaning captions and the internet thinks it's not okay!

Faiza Saqlain is Pakistani Actresses’ New Go-To Designer and These Pictures Are Proof!