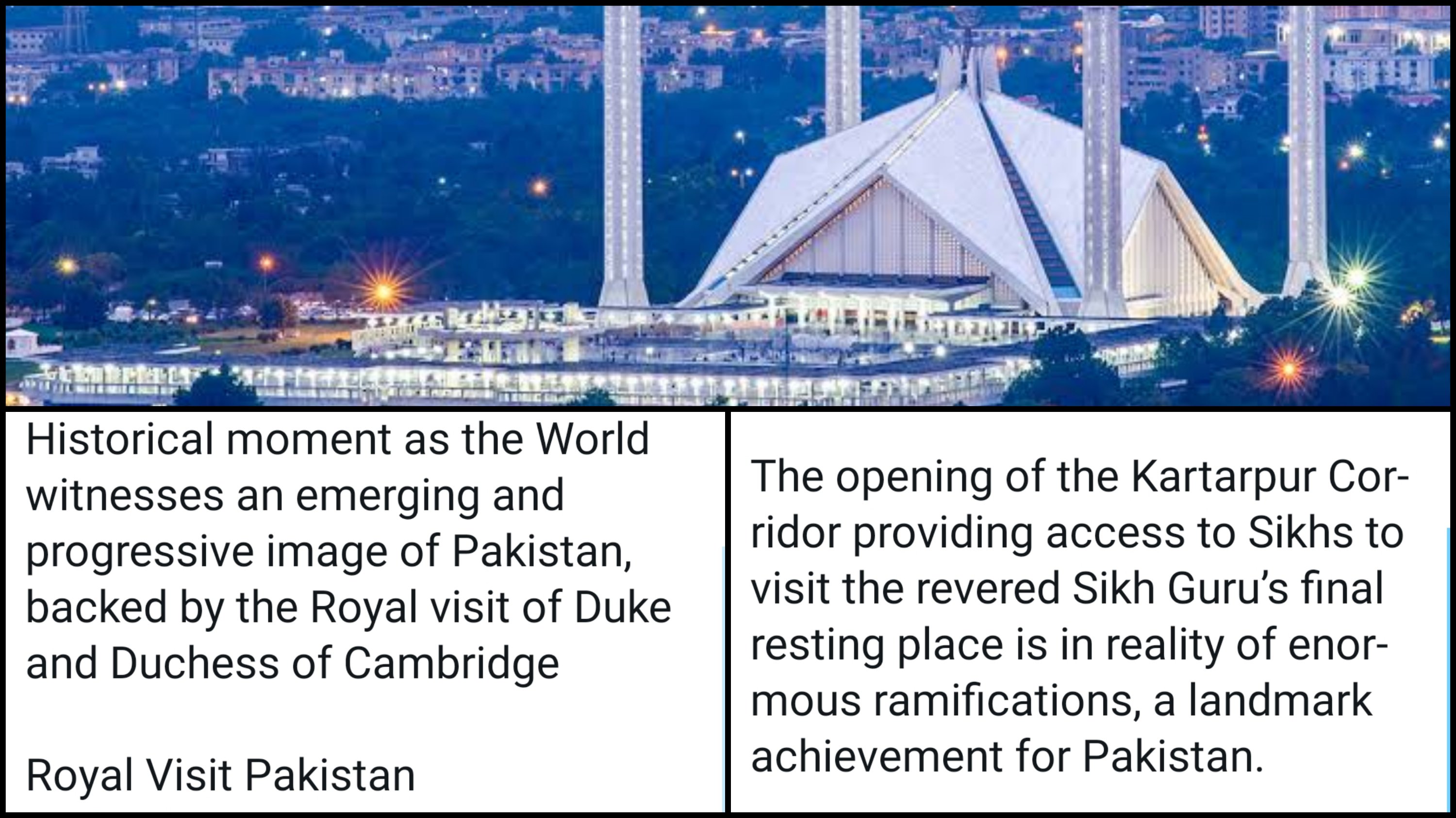 2019 was a rather progressive year for Pakistan with many excellent developments in almost every sector. And as the year 2019 comes to an end, the netizens are sharing what Pakistan achieved in 2019 under the hashtag #BestOf2019_Pakistan:

And the facts will make you proud!

#BestOf2019_Pakistan
Pakistan is the best country for social entrepreneurs. In 2019, the country went up 18 places to 14th position on the list of world's biggest economies and has jumped from 30th to 1st place in making a living category.
Well done. @TeamIK_Warrior pic.twitter.com/Qrd9AG4JvL

A visit that changed the perspective of media globally:

Historical moment as the World witnesses an emerging and progressive image of Pakistan, backed by the Royal visit of Duke and Duchess of Cambridge

A speech so iconic, we’re still not over it:

A feat we stand proud of:

#BestOf2019_Pakistan
We proud at our PAF Who proved that tea can pe fantastic😍😂 pic.twitter.com/enag4VujgH

Pakistan has rolled out the first batch of its indigenous dual-seat fighter jets, manufactured in collaboration with its all-weather ally China.
A grand ceremony was held at the Aircraft Manufacturing Factory in Kamra near Islamabad on Friday 29/12/2019.#BestOf2019_Pakistan pic.twitter.com/C84WSzNO03

Our citizens making us proud:

Some of our very favourite designers designed clothes for the Duchess of Cambridge:

Pakistan designer Maheen Khan and Khadija Shah ar3 among the few designer who had the honour of stylling the Duchess of cambridge Weldone both of u 👏👏👏#BestOf2019_Pakistan pic.twitter.com/Do3CksvMDw

British Airways coming back to Pakistan:

A little something for our Sikh brethren:

The opening of the Kartarpur Corridor providing access to Sikhs to visit the revered Sikh Guru’s final resting place is in reality of enormous ramifications, a landmark achievement for Pakistan. pic.twitter.com/2p74KGrY24

We pulled off the entire PSL in our own country!

First step towards a stable economy:

An Eminent Improve In Pakistan Stock Exchange Gesture Of Stability And Prosperity.#BestOf2019_Pakistan pic.twitter.com/H3fvngS7Xg

An achievement in itself!

Foreign investments coming back to Pakistan:

We’re a land full of resources:

#BestOf2019_Pakistan
First layer of indigenous coal has successfully been unearthed in Thar Coal Block II.
According to Sindh Engro Coal Mining, the coal was unearthed today at a depth of 140 meters below the surface, which is a great success. pic.twitter.com/RMaBHg90xn

#BestOf2019_Pakistan
Explore the valleys of Hunza, Shigar and Khaplu via the renowned Karakoram Highway,” suggests Sara Barbieri, another specialist with GeoEx. “This little-visited region in the far northeast of the country offers the kind of startlingly striking scenery. pic.twitter.com/ivfYPeiGbZ

Alhumdulillah Pakistan 🇵🇰 is at the top for best holiday destinations in 2020.@TheTeamPatriots pic.twitter.com/UBkjRALCD3

This highlight of 2019 where Pakistani JF17 jets shot down two Indian MiG-21 planes will be remembered for years to come. Inshallah 2020 will be the year of destruction of Hindutva Nazism! #BestOf2019_Pakistan pic.twitter.com/Np1k4VznUI

Who run the world? Girls!

Nothing but the best!

#BestOf2019_Pakistan
Pakistani women are secondary to none! They’re competing with the World’s best in all stages of life. Such is an example of Maj. Samia Rehman who honored Pakistan's name by winning the UN (SRSG) certificate of the year 2019 for her exceptional performance. ❤️ pic.twitter.com/AsfwJ5TU1p

#BestOf2019_Pakistan
Pakistan's ongoing accounts (current accounts) have gone up in October 2019 for the first time four years, while deficit has decreased to 73.5 percent in the first four months of this year compared to the last fiscal year!! @TeamIK_Warrior pic.twitter.com/RAfYlmDsGz

There is a need for promoting greater understanding and tolerance among and between communities across the world: Prime Minister Imran Khan@TheTeamPatriots pic.twitter.com/3Sk7Ftjeaj

Our jawaans making us proud:

Pakistan Army team has been the winner for second consecutive year in pace sticking competition in Uk…#BestOf2019_Pakistan pic.twitter.com/eLHEMOMFI5

The Indian CyberSecurity Chief Said that Ever since Pakistan Army Created the DG ISPR Post,They have Got their act Together.#BestOf2019_Pakistan pic.twitter.com/WjM4Su56Mx

Like we said, there are developments in every sector:

What’s your best memory from 2019? Let us know in the comments below!