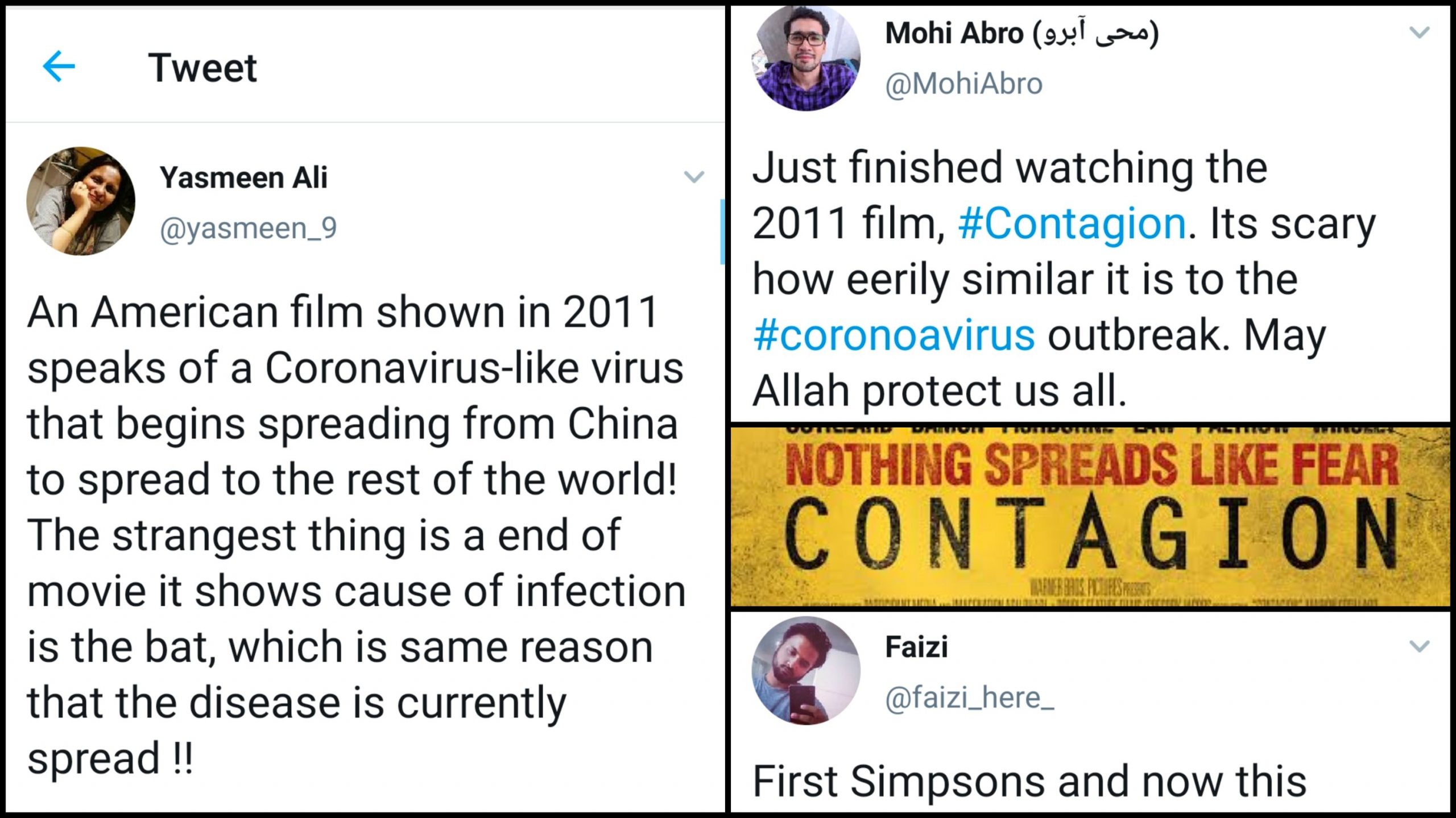 As reports of people getting infected with Corona virus are increasing, people can’t stop comparing the plot of the movie to what’s happening today.

The movie came out ten years ago, but its twisty plot has definitely taken on new relevance in the wake of the coronavirus. A decade after its release, the film has shot up to number 15 on the iTunes movie rental chart.

And it sounds scarily similar to the fictional MEV- the experts in Contagion were battling. Terrified of the similarities, people turned to Twitter:

An American film shown in 2011 speaks of a Coronavirus-like virus that begins spreading from China to spread to the rest of the world!
The strangest thing is a end of movie it shows cause of infection is the bat, which is same reason that the disease is currently spread !! pic.twitter.com/al25z4EjAy

So Hollywood was too advanced in 2011 to make a movie on a virus spread that originates from China and its main cause is bats. Search for the movie "Contagion".

The fictional virus and corona virus even share the same origin, bats!

In 2011 Hollywood made a film 'CONTAGION' based on Corona like virus in which China was the origin of disease and cause of infection was bat.#coronarvirus#ChinaCoronaVirus pic.twitter.com/v0yovJ9Cyb

I feel like we’re all just minor characters in Contagion 😷 #CoronaOutbreak pic.twitter.com/XPQa0FJc6D

Many had the theory that these viruses are made to spread deliberately:

This is a short clip from the movie 'Contagion' released (2011). The same is happening in 'Wuhan' province of China. Hence, proved that these viruses and epidemic are spread deliberately by the global elite. https://t.co/HM1YwLQ7VI pic.twitter.com/0rhrhPjoPw

Many were comparing the current situation to another series on Netflix as well:

With the rise of the documented corona virus cases and a looming global epidemic i have a film to recommend:

Contagion (2011) is a medical thriller that is an accurate portrayal of how an epidemic spreads and how field workers, researchers and health officials work together… pic.twitter.com/erWSORdZhv

Just finished watching the 2011 film, #Contagion. Its scary how eerily similar it is to the #coronoavirus outbreak. May Allah protect us all.

Some had theories of their own:

I feel like #coronavirus is a chineese medical Mafia,

People were getting paranoid:

I’ve reached the point of paranoia over this Corona Virus, I just rented the 2011 hit film Contagion. Why? I find it extremely eerie how it correlates to what’s going on rn.
5/5 recommend. Plus Matt Damon is in here if you’re into that. I might be spiraling lmao pic.twitter.com/gSoCdGLfzS

They beat the Simpsons in this particular prediction.

Some were calling it bio-terrorism:

It can't be ruled out that
recent outbreak of Corona Virus in China could be "Bio terrorism" , following Trump's trade war against China.
Pharmaceutical mafia is definitely going to make some good profits from this.
Some SS from
"Contagion" 2011 ,an American film. pic.twitter.com/PNjrSR90ur

Spread of corona virus can part of sophisticated bio attack, its will not only impact people but Chinese economy in the days to come.

Amidst the paranoia, there were a few who were still waiting on the official word from experts:

Bats have not yet been confirmed to be the cause of infection, have they?snakes are also mentioned? But bats are reservoirs for many viruses, they can host and spread them without falling ill themselves. Chinese wild life/wet markets are a hot bed for viruses to spread n mutate.

Some were referring to it as a biological weapon:

I believe that power thirsty nations have always been looking for biological weapons.. to kill ppl without any damage or harm to properties etc

I saw this movie yesterday and slept while watching after Kate Winslet died. 😅
Actually it was boring though it was very relatable with the current situation here.

Coincidence or something else? https://t.co/iraNlUE8RL

It’s getting out of hands now, tbvh:

First Simpsons and now this https://t.co/lj9X7x4ZTt

I saw the whole trailer and the part where they show theres no one on the streets is reminding me of #china at the moment ! So damn scary😭 #2019nCoV #cronavirus @WHO #ChinaVirus https://t.co/enLHLXQaY3

Many were mind blown:

Okay wow, you just can’t beat the Simpsons, can you?

With the cases of Corona virus increasing by the minute, we hope the tragedy comes to an end soon. What do you think about the eerily similar scenario? Let us know in the comments below!

Damsa got the happy ending it deserved and people just can't stop lauding the drama!

Here's how compatible Aquarius is with every other zodiac sign