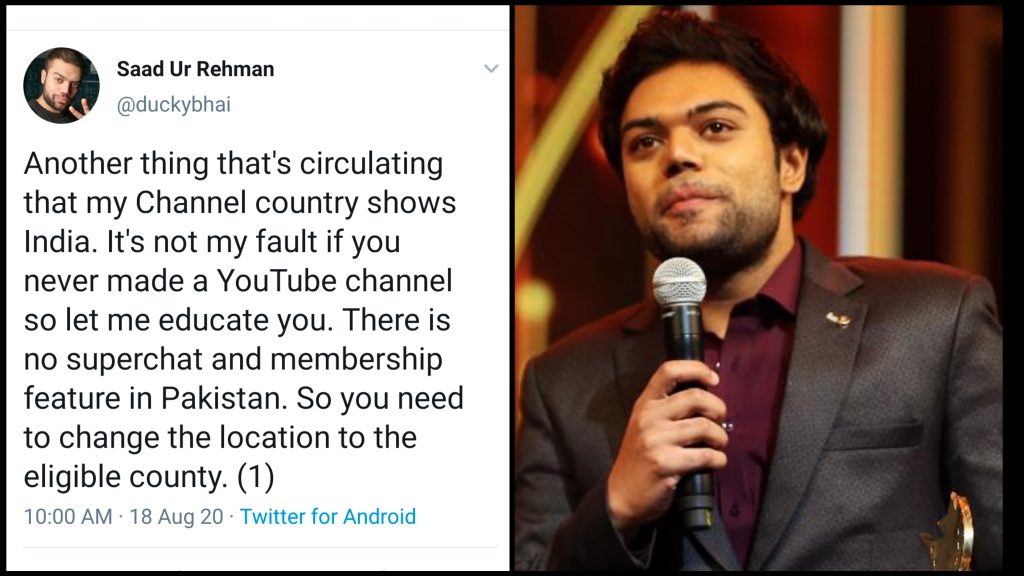 In a recent turn of events, YouTuber Ducky Bhai has been receiving tons of backlash for unleashing his followers on a girl who uploaded a picture of her dog wearing the flag around its neck, his followers have since then been bullying the girl to the extent of death threats in the name of nationalism and patriotism.

But things took a turn when someone on Twitter pointed out how Ducky Bhai keeps lecturing others on patriotism while he has his channel registered in India:

This Ducky guy is another pretend comedian who runs his channel with location of India for a bigger reach. Paise ki lalchi qoum, aur Pakistanio ko patriotism ke lecture pic.twitter.com/zLrplLRBYQ

And people were calling him out on his hypocrisy:

Aur isay hi PISA award b mila tha if I am not wrong.

Yeh hai "Patriotism" ki asliyat. He had no qualms in declaring himself an Indian for more clout! https://t.co/wLvW84t7Hp

Ducky bhai said respect the flag! Unless it’s about money, then it’s every man for himself. https://t.co/EDFmtABY5B

Another thing that's circulating that my Channel country shows India. It's not my fault if you never made a YouTube channel so let me educate you. There is no superchat and membership feature in Pakistan. So you need to change the location to the eligible county. (1)

I am a gamer/live streamer and i want my live streams to properly work. I'll change the location to USA or UK if you want but can't change to Pakistan because of no live streams features. Just like you need to change your Facebook page location to enable your monetization (2)

According to the Youtuber, he did it all to avail the feature of superchat, but others shared how the feature is very well available to those who have their location set to Pakistan:

MrJPlays is also a Paki gamer and he has set Pakistan as his channel's location. He's getting superchats without any issues. Ducky Bhai is the only guy who knows about YouTube more than anyone else. Apna fake patriotism andar le lou jab tum khud hee aik Indian YouTuber hou. (1) https://t.co/VBxK39XR5r

While Pakistani who live in UK , best streamer location is Pakistan.

People wanted to know why India?

Which was ✌intelligently✌ answered by the PISA Award winner:

It's because sometimes your channels gets hacked or some other problems occus they can assign me with Hindi/Urdu speaking person for better conversation.

People were throwing shade at him:

How hard is it?

What goes around comes back around 🤷‍♀️

See. If you let people explain things, you may find reasons to not be offended. Try that in the future. Give others a chance to explain as well

All the counties in the world and you chose India and then have the audacity to give us lectures on patriotism and being rEsPecTfuL towards country?
Bhai yeh Twitter hai. You don’t get away with hypocrisy here. https://t.co/2t0XSaBW0k

It’s as simple as that:

Then don’t stream lol, if you’re patriotic you’d only do what you can do staying in Pakistan. Otherwise you’re just an attention seeking hypocrite https://t.co/C9sfK1nLaS

And while many people had their reservations, others didn’t really mind the location and the debate is still on at Twitter!

5 Things That Makes Prem Gali A Fresh Show On Our TV Sets!

Asim Abbasi Believes That Churails Belongs To Everyone Who's Consuming It & The Consumers Have Spoken!