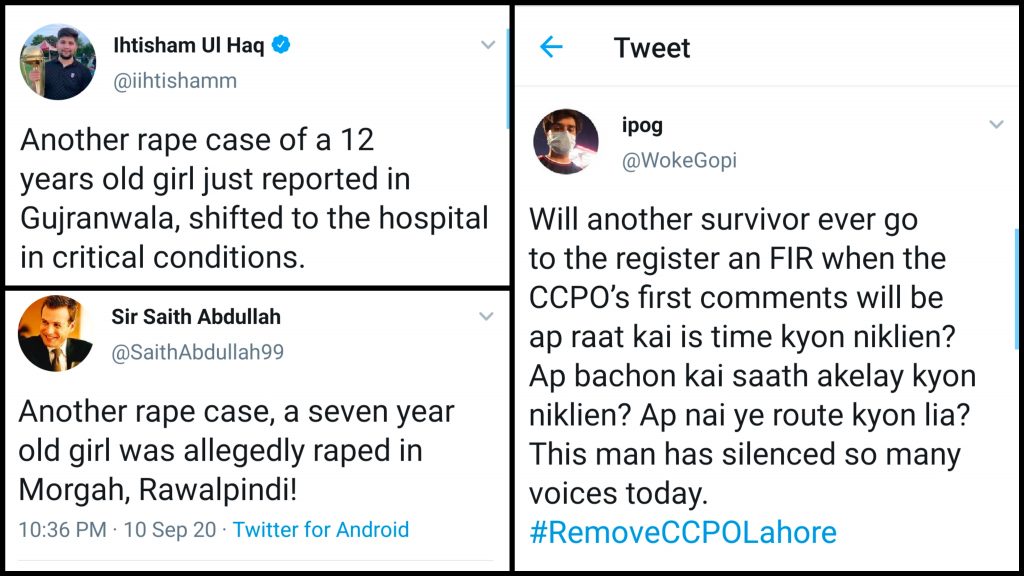 The nation had barely digested the bone chilling assault at the Motorway, that 2 more cases involving minor girls aged 7 and 12 came to light, one from Rawalpindi and the other one from Gujranwala. The alarmingly increasing number of the assault incidents has distressed people to a great length.

We are still in middle of processing the motorway incident.

12 year old raped in Gujranwala. I don't know what to say and how to articulate it better. I am guilty of being alive today. https://t.co/K5LL2nmZ6J

Moreover the victim blaming comments from the CCPO Lahore also have everyone fuming:

THIS MAN NEEDS TO BE REMOVED NOW. HOW DARE HE BLAME THE VICTIM? #Motorway #motorwayincident pic.twitter.com/GVRpjbactx

After the initial video, people were alarmed by the nerve on the officer to blame the woman rather than doing his job. People expected that he’d do better in the second round of interviews, however, that too was cut short after the second interview went viral:

The police officer who said that the motorway rape victim should not have travelled on that route at night repeats his stance and adds that she (the woman raped in front of her children) thought this was France. And PM Imran’s right hand man, Shehzad Akbar, defends him! pic.twitter.com/z4wWooIY7v

And people think this victim blaming mentality needs to die!

How DARE HE talk down to women in this way & BLAME RAPE VICTIMS? This is OUR country, OUR motorway, OUR right to travel. The police force & govt servants are meant to SERVE & PROTECT, not lord it over us 😡 Immense arrogance + incompetence + misogyny #MeraJismMeriMarzi #motorway

People were calling him a rape apologist:

You are a rape apologist because in incidents like this you are reminded of your own actions and you try to hide your guilt behind a bunch of meaningless words like this which you consider a justification to feel better about yourself. So fuck u

The ccpo starts out with questioning the victim herself. Good luck with that.

Actor Osman Khalid Butt too was appalled at how openly it was being admitted that the country isn’t safe for women:

Tell me this did not chill you to the fucking bone. This is an open admission that this country is not safe for women.
And we should make peace with it. https://t.co/Rde1JlprKs

For an officer to effectively blame a woman for being gang raped by saying she should have taken the GT Road or question as to why she went out in the night with her children is unacceptable & have taken up this issue. Nothing can ever rationalise the crime of rape. That's it.

Actress Mansha Pasha too shared how everyone is responsible:

The first crime is committed by the rapist.
The second by those who blame the woman.
The third by the officials who do nothing.
And the fourth by those who say nothing.

The only one blameless in entirety is the victim.

Shaniera Akram wanted people to know how monsters are actually real and very much among us:

I’ve said it once and I’ll say it a million times till I’m heard. We are lying to our children when we tell them Monsters don’t exist! Monsters are real, they live amongst us and they are as dangerous as ever! #RealMenDontRape #MonstersAreReal #SexualAbuseIsReal #SpeakTheTruth

People wanted him to stop making excuses for failing to do his job:

SOCIETY IS TARAH KI KYUN HAI? Women can travel alone at night in France because unlike us their law and order situation isn’t poor. You didn’t do your job stop making up excuses. Why didn’t she get a response from your fucking piece of shit motorway police?! #RemoveCCPOLahore https://t.co/gciXrkwA2D

People wanted the rape apologists to be held accountable too!

This is CCPO LHR, Umer Sh. He is victim shaming. Everyone wants public hangings, what are we going to do about these rape apologists & rape culture enablers? Cuz no matter what punishment u choose, this culture of shaming victims prevails. Tackle the real issue i.e rape culture

Translation: She should not have expected us to do our JOB like foreign law enforcement agencies. https://t.co/jraHH0OoL9

As a Public Servant and a Police Officer, Umer Sheikh’s job is to question why there were armed men on the motorway. Instead he thought it’d be okay to ask why was a woman on the motorway with 3 kids. Only one of these groups is doing something illegal. Only one is criminal.

People were also appalled at the lack of outrage on the situation:

An actress twirled in a mosque & there were hundreds of molvis blocking the roads & yelling.

These men broke the glass of a woman's car, dragged her outside & raped her infront of her kids & there's no one on the road.

Actor Haroon Shahid shared how the reality was exactly what film director Shoaib Mansoor had shown in Verna:

I remember while shooting 'Verna' I'd question Shoaib Saab, how is it possible that someone can walk into a park and pick up a girl and rape her in broad daylight. It sounds impossible. His response was "Hota Raha hai, ho sakta hai aur hota rahay ga" 🤷🏻‍♂️ #HangRapists

People wanted sex education to be taught in schools, to create awareness among the children:

A country where a 5 year old gets raped and her body disfigured, a mother gang raped in front of her children, but let’s rip out reproduction chapter from grade 5 textbooks, let’s never teach sex Ed and good/bad touch, keep us in the dark because everything is hunky dory.

I just want to leave this here. That’s all. pic.twitter.com/vje6OpPFLF

People were sharing the average number of rapes in Pakistan, and the number has us speechless:

Parents were sick worried for their girls:

My dad who never dictated me, said these words with nothing but helplessness in his eyes.
I blame SOCIETY
I’m beyond disappointed.

“This is not France” he said. So It is wrong to expect to be safer in my own country than in France? Can the State not provide women citizens the protection they deserve under the constitution? #unfathomable #crime #safety #security

If they started broadcasting the number of rape cases like those of corona, maybe this nation will see the severity of the situation.

The past few days have been extremely disturbing, with a total of 4 cases in a week, it’s worrying to see the sad state of affairs of the country. What do you think?

People Share The Most Ridiculous Questions They Were Asked During Rishta Meetups & We're Speechless!

Ali Zafar’s Upcoming Mobile Ad Mistaken As The Making Of Desi Ertugrul & The Replies Will Make You LOL!