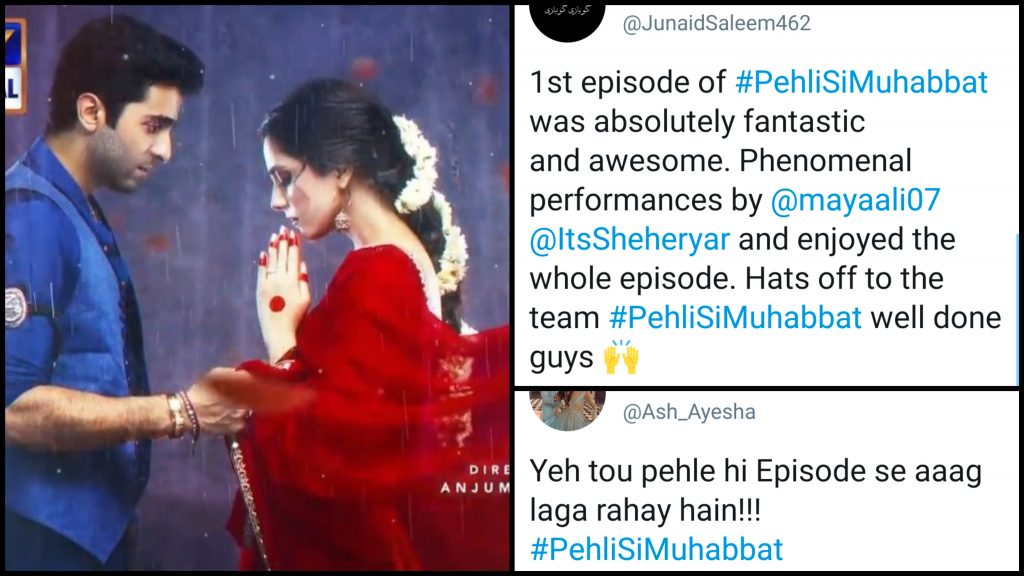 One of the most anticipated drama serials, Pehli Si Mohabbat, aired its first episode today.

The drama marks Maya Ali and Sheheryar Munawwar’s comeback on TV which had their fans over the moon! The episode itself had us hooked onto it since the very first scene where we’re introduced to Rakhshi and Aslam and we weren’t the only ones, netizens all over the country fell in love with the drama and have taken it to twitter to adore the first episode!

With the drama being one of the top trends on Twitter even before the episode began, there’s so much love pouring in!

1st episode of #PehliSiMuhabbat was absolutely fantastic and awesome. Phenomenal performances by @mayaali07 @ItsSheheryar and enjoyed the whole episode. Hats off to the team #PehliSiMuhabbat well done guys 🙌 pic.twitter.com/VHHTu5Kpqv

People were lauding HSY for the hidden actor in him:

Fans were so happy to see Maya returning to TV:

Ahh! I missed her on TV sooo much😭😍 #PehliSiMuhabbat pic.twitter.com/94PQBCJcjf

People were sharing their love for the OST as well:

What a serial 😍😍 In love with it, can't wait for nest episode. #PehliSiMuhabbat 💘 pic.twitter.com/m5Vm29V9il

Actors were already teasing the fans with dialogues:

Don’t forget to watch #PehliSiMuhabbat tonight at 8pm only on Ary Digital. pic.twitter.com/I6gvngZnZp

People were impressed by everyone in the cast:

She has all of our hearts!

She creates magic on tv screens.

How did you like the first episode? Let us know in the comments below!