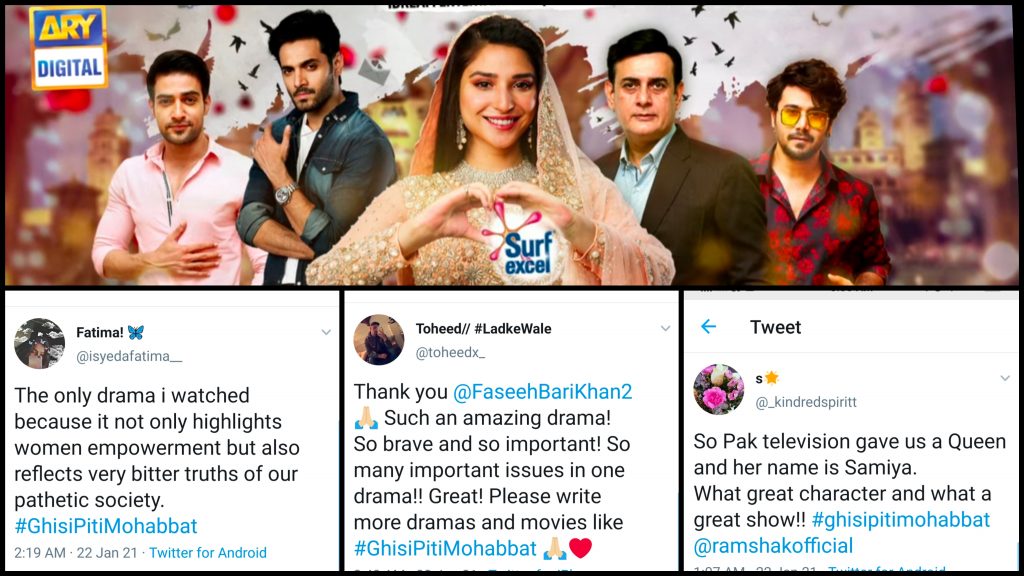 If there’s been one drama that has us hooked since the first episode, it’s Ghisi Piti Mohabbat. With a script so fresh and genius accompanied by brilliant direction, the drama quickly became a favourite for many, including us!

And as the drama came to a fitting end last night, fans have been expressing how they loved being on the journey that Saamiya took them on:

Wow. #FaseehBariKhan deserves a standing ovation for the finale of #GhisiPitiMohabbat . This is what Pakistani drama viewers deserve, a true feminist story, a show about empowerment. Samiya is an inspiration for all women. Absolutely loved it. #GhisiPitiMohabbat #RamshaKhan pic.twitter.com/ya5Z0Ez18P

Appreciation tweet for Ramsha Khan. The way she portrayed Samiya’s confidence, anger, exhaustion, happiness, love and feelings of betrayal was so good. Even in moments of outbursts it was never over the top or screechy. A character and drama for the times #GhisiPitiMohabbat

The dialogue that won everyone!

This is the only drama which show women empowerment in a true sense. Shout-out to writer who finally show story of a common girl who actually realise that "asman ko choone k lye taare torne wale k talash h q" Samia❤️#GhisiPitiMohabbat pic.twitter.com/S8nHeDBR6G

to touch the sky why do we need someone who could have brought the stars to us? even if we had someone, why would we stop the search for stars? this sky was Mine
which was bound to be touched by Me & I'M gonna touch it slowly..step by step'👏👏#GPM #Ramshakhan#GhisiPitiMohabbat pic.twitter.com/CEenFMpfOq

All hail to Faseeh Bari Khan!

We agree, no one could have done it better than Ramsha Khan, such a fine actress!

You have arrived @ramshakofficial what a performance! I'm saying this from so many days and I'll say it again no one could have done Samiya's character better than you. You were Samiya and that's your win and #GhisiPitiMohabbat 's win.

She really owned it!

Well done @ramshakofficial you owned that drama! with a great supporting cast…

I could do with a burger from Papas Amazing Kitchen…

and that's how you end an amazing show. just absolutely brilliant#GhisiPitiMohabbat pic.twitter.com/FEige8Wp5c

People were living for it!

Watched the last episodes of #GhisiPitiMohabbat and I have to say I ABSOLUTELY LOVED IT! It was a true women empowerment and such strong message in the end. It broke every kinda stereotype.#GhisiPitiMohabbat

The drama broke all stereotypes to carve a path of it’s own:

Truly inspired all of us by breaking stereotypes! It need to be appreciated, gave many great lessons 👏 Hats off to the writer! #GhisiPitiMohabbat pic.twitter.com/007P8aT95c

People loved how they could relate to Saamiya on so many levels:

You have arrived @ramshakofficial what a performance! I'm saying this from so many days and I'll say it again no one could have done Samiya's character better than you. You were Samiya and that's your win and #GhisiPitiMohabbat 's win.

So Pak television gave us a Queen and her name is Samiya.
What great character and what a great show!! #ghisipitimohabbat @ramshakofficial

The only drama i watched because it not only highlights women empowerment but also reflects very bitter truths of our pathetic society.#GhisiPitiMohabbat

Ammazing drama love the end and performance of all the actors love the story line so unique and eye opener for many people we want more dramas like this @ramshakofficial #GhisiPitiMohabbat pic.twitter.com/s0AHAyCCdr

Same, Thursdays won’t be the same without GPM:

The ending couldn't have been more better! Such a strong portrayal of women in this drama serial. I'm so so looking forward to more dramas like these than the cliché saas bahu serials. I'll miss switching the TV on every Thursday at 8. Brilliantly executed!! #GhisiPitiMohabbat 💙

Watched the last episodes of #GhisiPitiMohabbat and I have to say I ABSOLUTELY LOVED IT! It was a true women empowerment and such strong message in the end. It broke every kinda stereotype.

Because not everyone can digest satire!

#GhisiPitiMohabbat was a masterpiece loved every episode of it. I can not understand why it was so underrated?? pic.twitter.com/Kq8gN4iiQ9

#GhisiPitiMohabbat
Kinda disappointed why this Drama is so underrated .What an amazing drama with unique Storyline. It was a true women empowerment & such a strong message in the end.Breaking Stereotypes.
"یہ آسماں تو شروع سے میرا ہی تھا
اسے مجھے ہی چھونا تھا خود" pic.twitter.com/cRbDOTCma4

People were lauding Faseeh for his writing and wanted him to write more dramas:

Thank you @FaseehBariKhan2 🙏🏼 Such an amazing drama! So brave and so important! So many important issues in one drama!! Great! Please write more dramas and movies like #GhisiPitiMohabbat 🙏🏼❤️

People felt that it was a much needed theme:

Just loved how beautifully the writer had explained that women should be financially independent rather marrying first.
Presenting a broader view through media is, what is actually much needed.#GhisiPitiMohabbat #RamshaKhan

People were sharing what they learnt from the drama:

Samiya was never happy with her family & work, so she was looking for love through marraiges. When she started enjoying her life, she realised that she can be happy without a marraige. Happiness can lie in work & in spending time with family ♥️#GhisiPitiMohabbat

Life can take unusual twists & turns. A happy marriage can not be in your fate despite your desire. The key to happiness in life is being happy with whatever you have. Not getting married/marraige not working isn't the end of life. #GhisiPitiMohabbat

How did you like the last episode of Ghisi Piti Mohabbat? Let us know in the comments below!

Ahad Raza Mir's Take On Nepotism Has The Internet Divided!