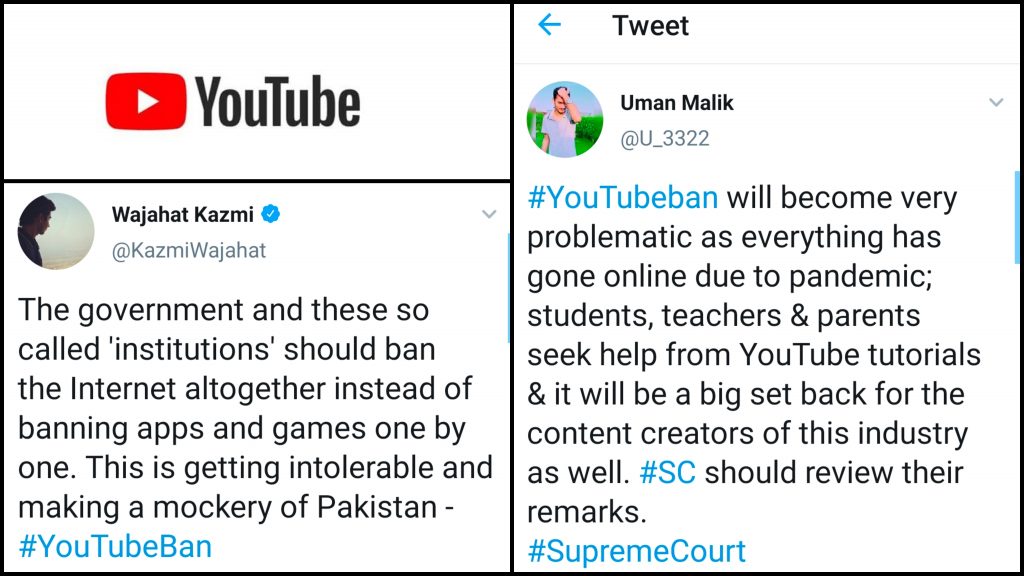 #DivaReports: While hearing a case on sectarian violence, the Supreme Court objected to unregulated content on social media, particularly regarding comments about the judiciary, armed forces and the government, and hinted at banning YouTube in Pakistan.

Furious at the hinting, netizens have taken it to all social media platforms to express their anger:

A great round of applause. It's just funny now. We have the potential to be called a developed or a first world country, but we are so obsessed with staying the way we are as a third world country. We ban what we don't understand as simple as that.#pubgbaninpakistan #YouTubeban pic.twitter.com/JlKQDvCEMl

People wanted the judges to revisit what was said last time:

The honourable Supreme Court of Pakistan should consider what Senator Aitezaz Ahsan had said about the YouTube ban in Pakistan in 2012: “Banning YouTube for a few objectionable videos is akin to burning an entire library because of a few books there one doesn’t like”. #YouTubeban

Musician Mustafa Zahid took to Twitter concerned at the ban:

It’s a ridiculous idea to ban YouTube in a country that has no music labels, no prominent music channels and absolutely no platform for youngsters to showcase their talent. #YouTubeban

People were feeling no different than being in North Korea:

Many were advocating how useful and essential YouTube is to learning:

Why pakistan is heading towards freedom-less days? The specific channels with inappropriate content should be banned rather than whole app. Other than that specific content, no doubt youtube is a big platform of learning for many students. #YouTubeban pic.twitter.com/7OObnhXVSg

Ban these shitty Judges & Retired
Generals at PTA who don't understand technology. Youtube ban in the past has hurted Pakistan's digital space so badly that we're still recovering. Let this new generation flourish. & keep your bullshit ideas to your brains@ZakaWaqar#YouTubeban pic.twitter.com/moWLPlBOCI

So your only reason to ban something is because people criticize judges?

If judges from didn't sound like complete buffoons all the time, maybe people would like them a lot more.

Judiciary is by far, easily the worst part of Pakistan's governance.#YouTubeban pic.twitter.com/HJvW1Mk6hV

Many were concerned about hundreds of people losing their means of earning:

Dear PTA and SC think before you do. There are thousands of YouTubers in Pakistan who earn through YouTube. Are you going to make them jobless just because of some idiots? You should ban or arrest them instead of banning the whole platform #YouTubeban pic.twitter.com/EThH4xwqQx

Now it's time to leave Pakistan. Seriously only these judges and stupid laws are the reason why

The government and these so called 'institutions' should ban the Internet altogether instead of banning apps and games one by one. This is getting intolerable and making a mockery of Pakistan – #YouTubeBan

People wanted to know where the #DigitalPakistan promise was heading?

Ok ban pubg acceptable
Ban TikTok no problem
But YouTube? Really Man
Thousands of people are learning from YouTube. If there is anything against the prosperity of our country then take action against those individuals. #YouTubeban pic.twitter.com/pBWRff2YOZ

All social media platforms will be shut down except Twitter and Instagram,because the banners themselves use these platforms.
Congratulations Pakistanis, soon your electricity, water and gas will also be banned
And you just keep fighting by the keyboard

Ducky Bhai thought this was a good time to put forward his resume:

Any strip club wanna hire me after #YouTubeban ? I do have some mujra experience tho.

And while it was just a hint, there have been reports of PTA responding to the situation:

Do you think banning app after app is a permanent solution? Let us know in the comments below!

Actors Who Made The Move From Theatre To Small Screen