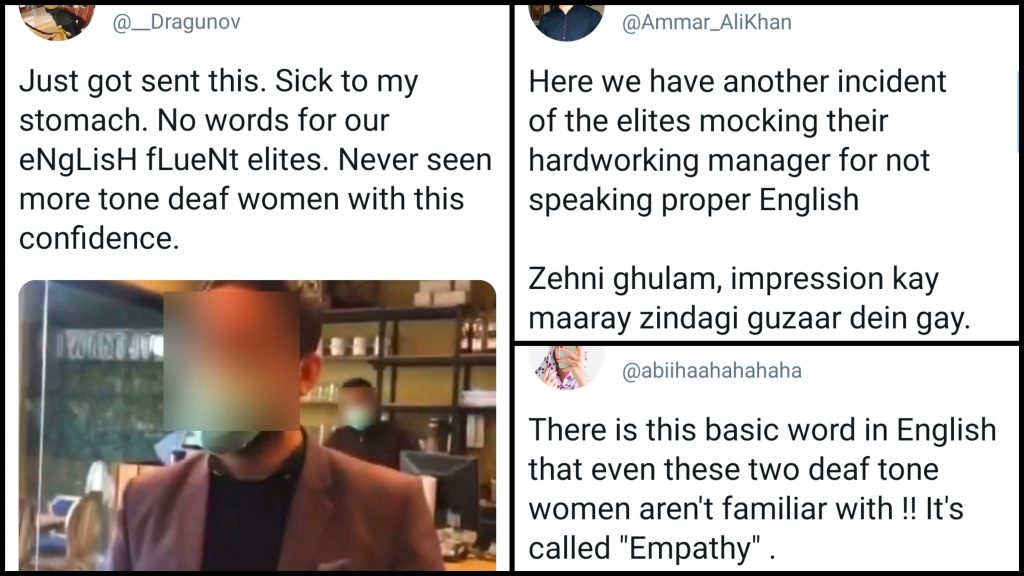 In a video that’s going viral on social media, the restaurant owners at Cannoli who introduce themselves as Uzma and Diya are seen mocking their manager, Awais, for his English:

Just got sent this. Sick to my stomach. No words for our eNgLisH fLueNt elites. Never seen more tone deaf women with this confidence. pic.twitter.com/5eIj9hWOnZ

And people think it’s the most tone deaf video they’ve ever seen:

I would personally pay for these women to take a class on compassion and empathy, but there are some things money can’t buy. https://t.co/gNGkEulObJ

People were disappointed at the lack of empathy:

Wasn't education supposed to remove the colonial mindset & provide the bridge towards a better & equal society?

Unfortunately, these wannabes suffering from – https://t.co/wfXshOFxo6

There is this basic word in English that even these two deaf tone women aren't familiar with !! It's called "Empathy" .#Owais https://t.co/4Li6TJJEG8

People wanted to know the purpose of making the video:

I just want to know what the reason was for this video? What did they hope to achieve? “Wow Uzma paid first this guy’s English classes and then humiliated him and wants her money back 😍”

People who had personally met Awais at Cannoli stood by his side:

I’ve actually met Owais at Cannoli… he is a very decent guy… it’s sad that he’s employed by such vile and distasteful elitists… both these women need to take a hard look in the mirror, because there’s nothing there… so disgusting

People were quick to boycott the restaurant:

I will never ever visit that place if it is owned by such low level people. How shameful is it to embarrass someone to escape from your boredom. We should socially boycott these shit minded womens and their business places.#IamOwaisAftaab https://t.co/fgWpwYVsn9

is cannoli short for colonial hangover

What do you get when you mix privilege with conceit? Apne mulaazmeen ki ENGLISH par mazak ura kar khud acha feel karne wali do pathetic khawateen.
Disgusting.
What use is your “better” education and upbringing if it couldn’t teach you basic manners and humility. https://t.co/Idkg8KViUV

i have a theory. once you are obscenely rich you lose most of your compassionate mental faculties. like, how out of touch can you get? “we’re bored so let’s make fun of the poors hehe” they’re just so…jaahil. humiliating your own employees for what? great PR, ladies. fantastic. https://t.co/A8k2JeO4CS

surprised at the value they have for someones 9 whole years of service and loyalty to their shit restaurant with shit burgers #cannoli https://t.co/wzQ0Q8R9Xe

People thought it was low blow:

This is sickening, HOW CAN YOU BE OKAY WITH LET ALONE MAKING FUN OF SOMEONE WHO HAS ACTUALLY TRIED TO IMPROVE HIS SKILLS, THAT TOO ON A PUBLIC PLATFORM? PATHETIC TO THE CORE. This is what is actually wrong with out nation, the laughs in the end. THAT. https://t.co/xcxFCEcPPp

People weren’t happy with the humilation the manager had to face:

I am just amazed that in their little pathetic previledged world they felt that once the post this video people wil actually find this funny. They humilated a poor man, who works hard for his income not to become content of their crass humour

People wanted to meet Owais and have a good time with him:

I just want to meet this man and spend a night drinking tea and talking about the world.

These women though….they can go to hell. Shaming a person because his 2nd language isn't private school educated? What is wrong with you women? That doesn't make him less of a person. https://t.co/SSsX7d0DJW

People found the video to be sickening:

The fact that people don’t understand that English isn’t the first language for many countries and it’s completely fine for not everyone to be fluent wd it. It is sickening the way people humiliate others on the basis of this shit i am ashamed and I’m furious rn. https://t.co/Yg9Wfnv1Ni

Disgusting, how can someone stoop so low? I’ve learned one good thing in my life is to never disrespect someone lower than my social class https://t.co/emrKP5K9zz

Speaking fluent english and wearing expensive clothes is useless if you lack basic manners. Being elite doesn't give you the right to humiliate middle and lower class people, this shit attitude makes you look like an imbecile not cool. Utterly deplorable!pic.twitter.com/HBEm7vOcGK

Jami messaged the restaurant, asking for an apology:

People were already placing their bets on the apology video that’s about to come:

What do you think about the reaction that netizens have shown? Let us know in the comments below!

People Are Sharing What Makes Them Pakistani & We Love Their Replies!

Ahad Raza Mir's Take On Nepotism Has The Internet Divided!