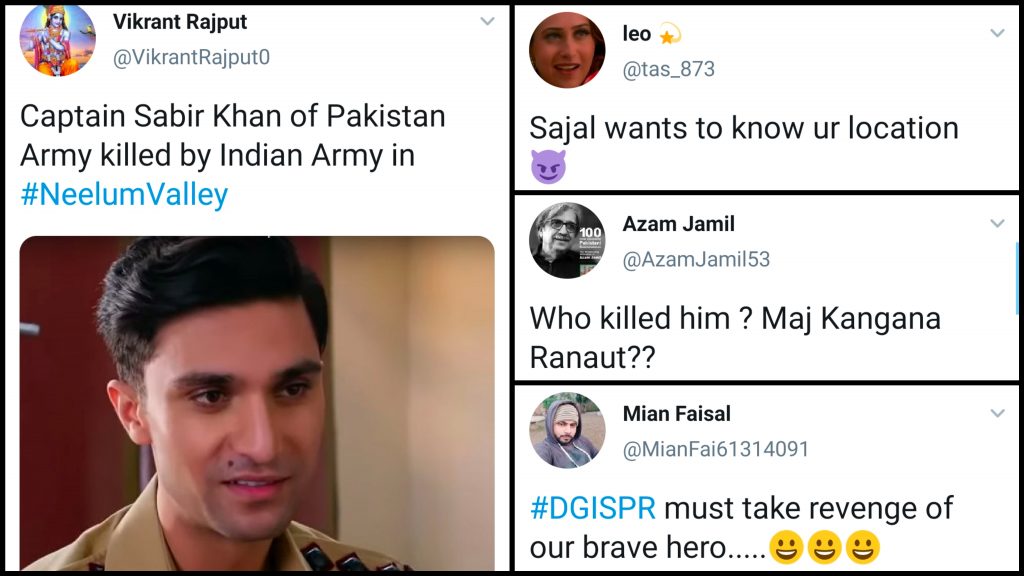 India is at it again, first they thought there was a civil war going on at “Bagh-e-Gulshan” in Karachi and now they think they’ve killed one of our most handsome soldiers in the Neelum Valley:

And yes, it’s none other than Captain Saad from Ehd-e-Wafa. Following the hilarious discovery, Pakistanis have the best replies to retaliate with!

People were sharing the actual scene:

Exclusive footage of Captain Sabir Khan in action at LOC. We shall remain indebted for your services! RIP 🙏 pic.twitter.com/iqNXpv3Vu5

People were confirming the death:

He was my first cousin.

Captain Sabir giving us a 👍🏻 from heaven 😂 pic.twitter.com/zwsoXpSYEB

we are sending major gulzaar from basti Malook to revenge cpt Sabir pic.twitter.com/29B25el8vM

People were remembering another brave captain from the civil war attack:

Yet another casualty of senseless war. The hero above was related to Major Janab Ud Din (who was martyred earlier in the battle of Gulshan e Bagh) 😢 pic.twitter.com/gCfMwt3HVB

You idiot this is a Pakistani actor from a recent TV serial https://t.co/ZefOr8gOTV

The replies had people in fits of laughter!

Pakistanis in Comments 😂
Their Sense of humour is of next level. https://t.co/YoRatqADgs

People were requesting Ahad Raza Mir to burst their bubble 😂

Dear @ahadrazamir Andhbhakts have apparently killed you on Twitter, Please tweet to let us/everyone know that you're fine and that your name is 'AHAD MIR' and not 'SABIR KHAN' and also that you're an Actor and not a Captain in Pakistan army! 😂😂😂 #NeelamValley #IndiaHammersPak https://t.co/ZF6PFUyLO1

Lmao 😂 what can we say, the world ranks our men as the third sexiest!

The funniest part of this is not the tweet. But the fact that Indian/Bollywood imagine the prettiest people to be ISI agents/ Pak soldiers i.e Katrina Kaif and Ahad Raza Mir. While for Pakistan RAW is more like Nayyar Ejaz, Shafqat Cheema, Shamoon Abbasi. https://t.co/K2s6E5kIBs

Hahaha, go get them Sajal!

He was also a captain in Pakistan Airforce. Tragic loss for Airforce and army 🥺 @ahadrazamir https://t.co/Hb2qxkanyM pic.twitter.com/rNz4xlI41O

What do you think about captain Sabir Khan? Let us know in the comments below!

Man at the second wife restaurant with his third wife goes viral!

9 Feature Films That Pakistan Has Submitted For An Oscar Nomination That You Need To See!