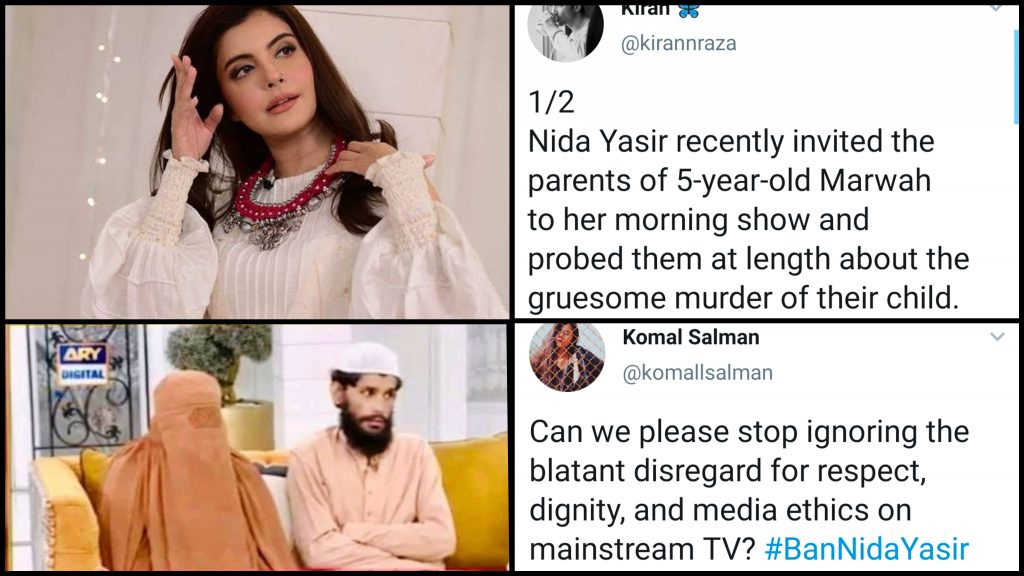 Nida Yasir and her morning show often find themselves amid controversy, but things have gotten too far this time!

Nida Yasir invited 5 year old Marwah’s traumatised parents to the show only to ask the most insensitive questions from the grieving couple. Netizens quickly took notice of the situation and are now running a hashtag asking PEMRA to ban the show altogether:

ARY Digital's Morning Show host Nida Yasir invited the parents of a 5 year old r*pe and m*urder victim on her show and asked them extremely insensitive questions, making the mother cry and the father barely able to speak.

Here's what you can do :

People were sharing PEMRA’s details where collective complains can be launched:

Call PEMRA at 080073672 and ask for the Morning Show to be banned. If you're not comfortable speaking impromptu, I attached a script that you can use.#JusticeForMarwah #BanNidaYasir@reportpemra @arydigitalasia pic.twitter.com/40mAfMkUfv

People were appalled at the insensitivity:

She crossed all limits of professional and human integrity.

What was the purpose of this show? To 'investigate' a serious and sensitive case on an entertainment channel??? What was the point of asking ….to shakal kaisi the? ..penchani ja rahi thi?#BanNidaYasir @Salman_ARY pic.twitter.com/TfNiIC8qt5

There isn’t an ounce of education in Pakistani Media.
Sorry to say but if Nida really wanted to help Marwah's Parents it could be possible without inviting them. This is beyond the limits just for sake of TV Ratings.
Please stop playing with emotions of poor people.#BanNidaYasir https://t.co/9I7qOu6EKd

People were calling shows like hers ‘cancer for the society:’

You are Calling the parents of a 5 yrs old rape and murder victim and asking them stupid and embarrassing questions in front of the entire world for ratings…😠
This is not the first time you did…
These low class morning shows are cancer for our society… #BanNidaYasir pic.twitter.com/Wycyg3KJN8

People were just so done with it:

Can we please stop ignoring the blatant disregard for respect, dignity, and media ethics on mainstream TV? #BanNidaYasir

People were fuming with anger:

People really had a lot to say:

Nida Yasir, host of 'Good morning Pakistan', in her disgusting appetite for ratings called parents of Marwah & went on to ask merciless questions, reliving the pain & agony of parents. 'Be Sharam. Be Ghairat Log.#BanNidaYasir#JusticeForMarwah pic.twitter.com/JdRyJuZUvE

People found it to be shameful:

It's so shame full yr how can be a some one so Insensitive yaar #BanNidaYasir pic.twitter.com/hxJRD7cEJQ

Many had already registered their complaints:

People thought she was taking advantage of their misery for TRPs:

How someone takes advantage of misery of poor parents who's child traumatized & than kill 💔.This lady asked insensitive questions just for her rating ….
Nothing but piece of shitttt #BanNidaYasir pic.twitter.com/TFCb3s7GGl

People thought she had lost her mind:

Okay so here we have Nida Yasir again. I don't even have word to describe her. She is purely Jahil. What on earth made her do this? And her questions to parents? I mean @ARYNEWSOFFICIAL is litterraly out of their mind. @reportpemra #BanNidaYasir pic.twitter.com/sgCI43RYbe

I'm gonna start trend #BanNidaYasir for her insensitive content & mocking victim's family on her morning show. Let's do it and show them social media power.
Please tag @Salman_ARY @reportpemra too in your tweets.#BanNidaYasir

People were calling it a crime:

Nida Yasir always, always crosses her limits but this time, she's done a crime and the world should know that and speak against it. It's supposed to be an entertainment morning show.The rape and murder of a 5 year old, investigating her parents, is not entertainment #BanNidaYasir

Disgusting, immoral and highly insensitive. Anything for the ratings#BanNidaYasir https://t.co/SJB6cqIFhI

Seriously, can you name any other TV channel in entire planet, who invites parents of a minor, and to ask question about her gruesome rape and murder.

What are your thoughts on Nida’s show and her insensitive questions from the already traumatised parents? Let us know in the comments below!