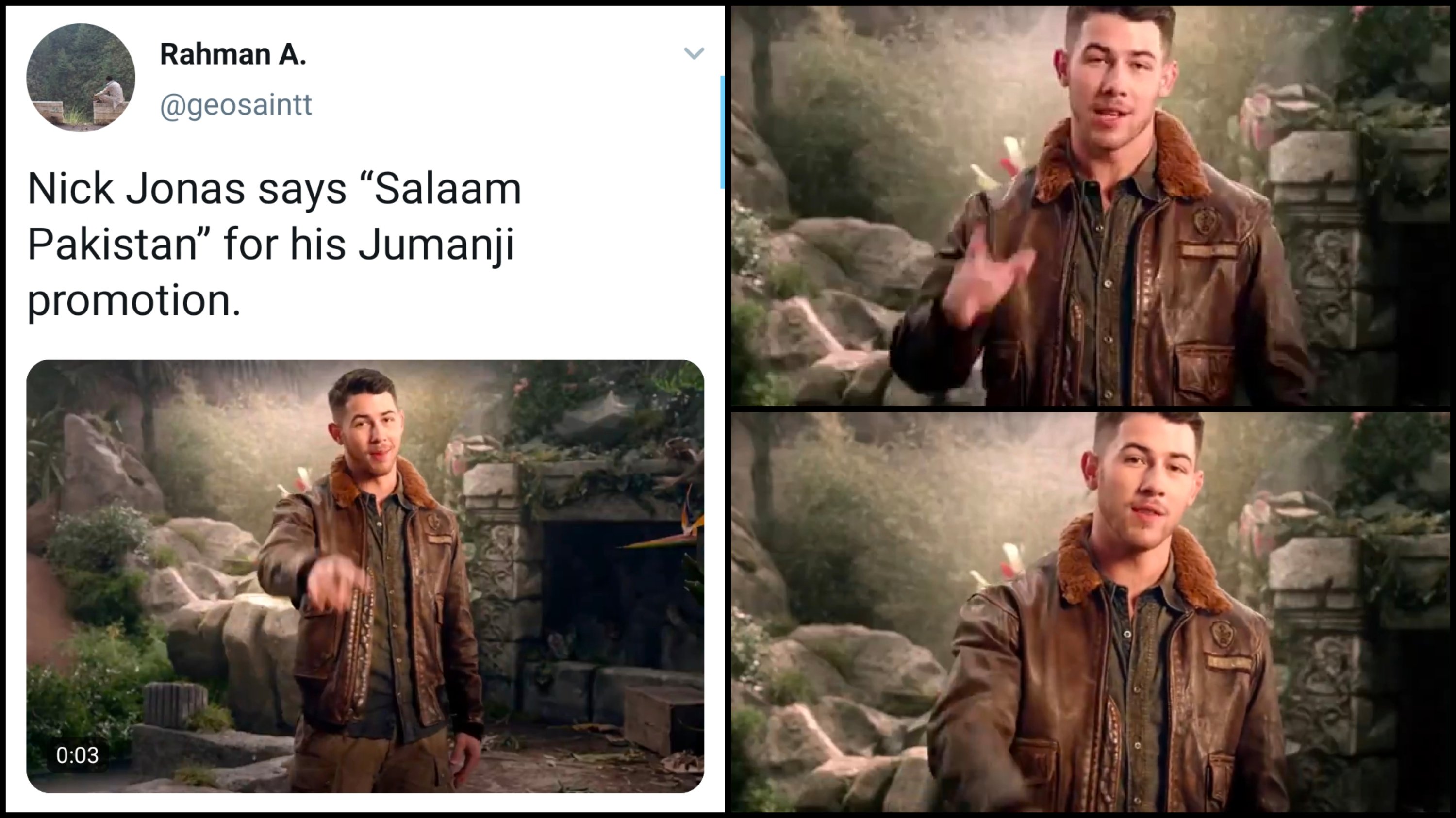 As a part of promotions for his upcoming movie Jumanji The Next Level, Nick Jonas of all the people, recorded a video clip asking the people to watch the film:

Earlier this year, Priyanka faced a lot of criticism after she posted a war glorifying tweet amidst tensions between India and Pakistan. Things got even more critical after she asked a Muslim girl who questioned her pro-war stance and asked her if she was done venting.

Nick’s ‘Salam Pakistan’ has been going viral all over social media and the internet wants to know if he’s done venting:

Some thought Nick will be sleeping on the couch, ouch!

Nick is sleeping on the couch tonight https://t.co/X7dcJ2y8KU

People were loving the way he said Salam:

Nick, what is this behaviour?

Just a tiny pinch of salt:

Some were straight up mad:

you’re married to a war mongering islamaphobe pls sit down no one wants to watch ur shit movie https://t.co/pUqUngxbgI

when the citizenship bill kicks in… https://t.co/PBLYASLNDp

Some answered his salaam and then politely went on to explain what the problem was:

Walaikum salam but yr wife priyanka cheered for a potential nuclear war with Pakistan and she whitewashes India’s brutal military occupation of Kashmir under which women are among the greatest victims. https://t.co/WsL9StTxeR

Some were concerned for Priyanka:

Priyanka how you feeling sis https://t.co/05IBM1F63Z

priyanka at the moment pic.twitter.com/JOc1t6BeAf

What shall we call this chapter?

an exciting new chapter in the bollywood pakistan boycott https://t.co/10XfhfIDPN

People were not amused:

Keep your salam to yourself, go tell your t*rrorist wife to stop wishing nuclear war upon us. https://t.co/ijyghWO52B

lmao Priyanka Chopra is probably removing all the "hubby" and "JonasSisters" hashtags and comments from Nicks Instagram rn skskskskskks https://t.co/i5qMXp8Znb

That’s one way to look at it:

Is this priyankas pakistani friend https://t.co/GF7ccrDC4M

I've never thought that any of the Jonas brothers looked similar until I've seen this video, Nick looks like Joe then Kevin at separate moments in this https://t.co/qoGKBLL6kd

This is what India and priyanka chopra must be feeling 🤡🤡🤡🤡 https://t.co/r7g2JpQrRO pic.twitter.com/GjLWx27pch

u idiots really wanna pretend this wasn’t all a thought-out plan as a way to get pakistanis to start loving him and perhaps that would make them stop hating priyanka? we can see right through you shut up https://t.co/L4cbU8SyNv

Some tweeted how Priyanka was gearing up to welcome Nick:

who tf watching Jumanji in Pakistan as if anyone turns off geo news and the bijlee goes out every few hours https://t.co/O3kDL8ycUM

White boy of the month https://t.co/kMJ7LVUxRv

Not the aag Priyanka was expecting:

What do you think about marketing Jumani this way? Let us know in the comments below!

With his tribute to Junaid Jamshed, Aleem Zafar proves that he's the jack of all trades!

Diva BFFs: Celebrities Who You Might Not Know Are Best Friends!