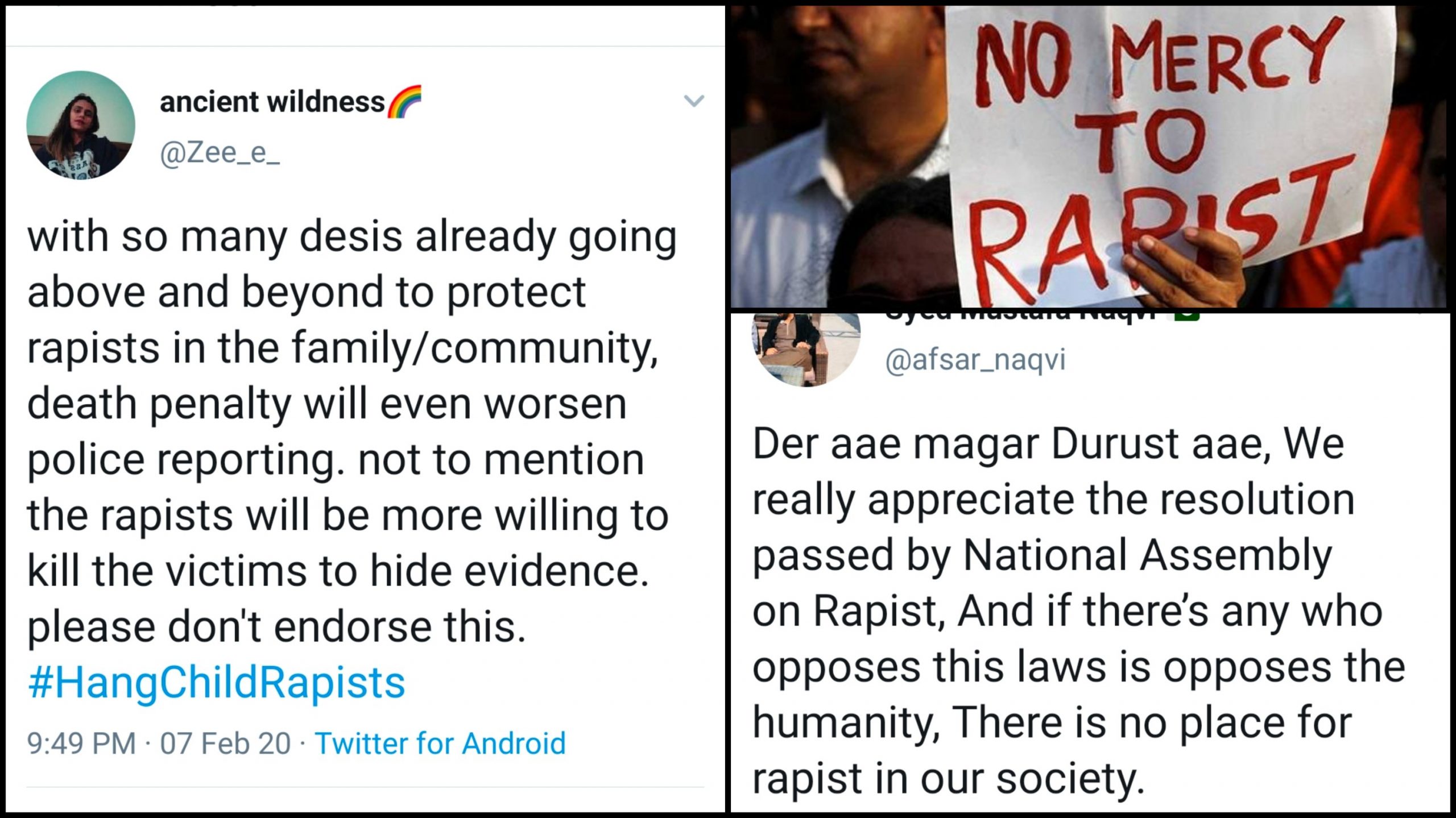 Following the increasing number of rape cases throughout the country, Pakistan’s parliament passed a resolution on Friday calling for the public hanging of convicted child killers and rapists.

The resolution gathered mixed opinions from the citizens, some were happy and some were against this ruling.

Strange when these rapes & murders of children are reported,we all call for the perpetrators 2 be hung in public. When the govt agrees we all begin 2 hide behind”human right violations". Unfortunate as it is,we need strong deterrents to stop this rot in society! #hangchildrapists

People had zero tolerance for rapists in the society:

Der aae magar Durust aae, We really appreciate the resolution passed by National Assembly on Rapist, And if there’s any who opposes this laws is opposes the humanity, There is no place for rapist in our society.
#hangrapistpublicly pic.twitter.com/IsgqWcHriH

People were sharing what impact the abuse has on the victims:

History tell itself that this is the only solution.. #HangRapistPublicly pic.twitter.com/OFAgsNf0LM

People were happy at the law being passed:

PAKISTAN HAS PASSED A LAW THAT DECLARES DEATH PENALTY TO PEDOPHILES AND THOSE WHO SEXUALLY ASSAULT KIDS.
I'M SO HAPPY. #HangRapistPublicly

People were sharing why this resolution is important:

Those who rape and then murder innocent children
This will work as a deterrent against every culprit. They will think a hundred times.👏👏👏👍@Ali_MuhammadPTI#Parliamentarians #HangChildRapists #HangRapistPublicly pic.twitter.com/XC501PglYD

People wanted to make an example out the rapists:

the rapist of any rape should be hanged infront of the people then it sets an example for other rapist also that if they did not stop the crime of rape then the situation of them also be the same…#HangRapistPublicly#stopchildabuse pic.twitter.com/cZHuZKGnHT

People were all for it:

People were calling out the ones who were favoring therapists in the name of human rights:

About the time the rapists pay:

To those who abuse, who rape : the sin is yours , the crime is yours and the shane is Yours…
And you have to pay for it !!#HangRapistPublicly pic.twitter.com/kP18pP799h

Many were lauding the good move:

This is a really good move. Hang a few rapists in public and no pedophile will dare touch our children again. pic.twitter.com/dE43n31Hy7

People were questioning why others we’re opposing this:

When rapists, rape a child they destroy their life. Why should we show mercy to the perpetrators of these heinous crimes? They deserve the most severe punishment. SHAME & LANAT ON THOSE WHO ARE OPPOSING & CRITICIZING THIS BILL۔#hangchildrapists #HangRapistsPublicly pic.twitter.com/ACunDzdnBD

Clearly for those opposing the public execution of child rapists.. Heinous crimes towards innocent children is just another crime.

No! It isn't just another crime.
Our children have suffered in silence for decades & this is the only solution moving forward.#HangChildRapists

People wanted it to be implemented asap:

Very good step towards .It should be implemented ASAP 🙏
Regards People of Pakistan #hangchildrapists #HangRapistPublicly pic.twitter.com/GeTN7ihPk9

People were urging how it should be taken seriously:

Child abuse imparts some serious damage to physical & cognitive well being of a child. And these consequences goes far beyond the affected child or family. Its high time now! This should be taken seriously.#HangChildRapists pic.twitter.com/2qxoagfddm

People were also advising parents to listen to their children and look out for any signs of abuse:

The only reason why child abuse is alive today, is because we as adults fail our children when we fail to listen to them. Listen to a child today!#HangChildRapists pic.twitter.com/Tfx1H64jZ0

People wanted this resolution to be implemented so that their children feel safe:

Our children needs to feel safe again. Its sickening! They're not entitled to face such trauma. This is depressing beyond words.#HangChildRapists

And while many were supporting the resolution, there were many who were against this resolution calling it an act of extremism, including some ministers:

Strongly condemn this resolution this is just another grave act in line with brutal civilisation practices, societies act in a balanced way barberiaism is not answer to crimes…… this is another expression of extremism pic.twitter.com/ye2abes8Dc

Excellent. Thank you Fawad for saying this. No to public hangings. https://t.co/Wi57yqPbSm

Some had their reasons for opposing the resolution:

with so many desis already going above and beyond to protect rapists in the family/community, death penalty will even worsen police reporting. not to mention the rapists will be more willing to kill the victims to hide evidence. please don't endorse this. #HangChildRapists

Some were sharing how this law contradicts the existing law which guarantees the dignity of the guilty:

Some were more in favour of torturing the rapist:

The children suffered. The parents continue to suffer.

Hanging is an easy death for child rapists. No. Don't hang them, let them live forever in the filth of prison.

Take away dignified human contact. Take away the normality they enjoy.
Take away their life and let them live.

Some were wondering if this will really help:

Will that help? What is needed instead is to strengthen the Criminal Justice System so that a credible threat of being arrested, convicted and punished increases and provides deterrence! Life Imprisonment should be for life too! https://t.co/0TVogCuNi6

What do you think about this resolution being passed? Let us know in the comments below!

New dramas that have piqued our interest!