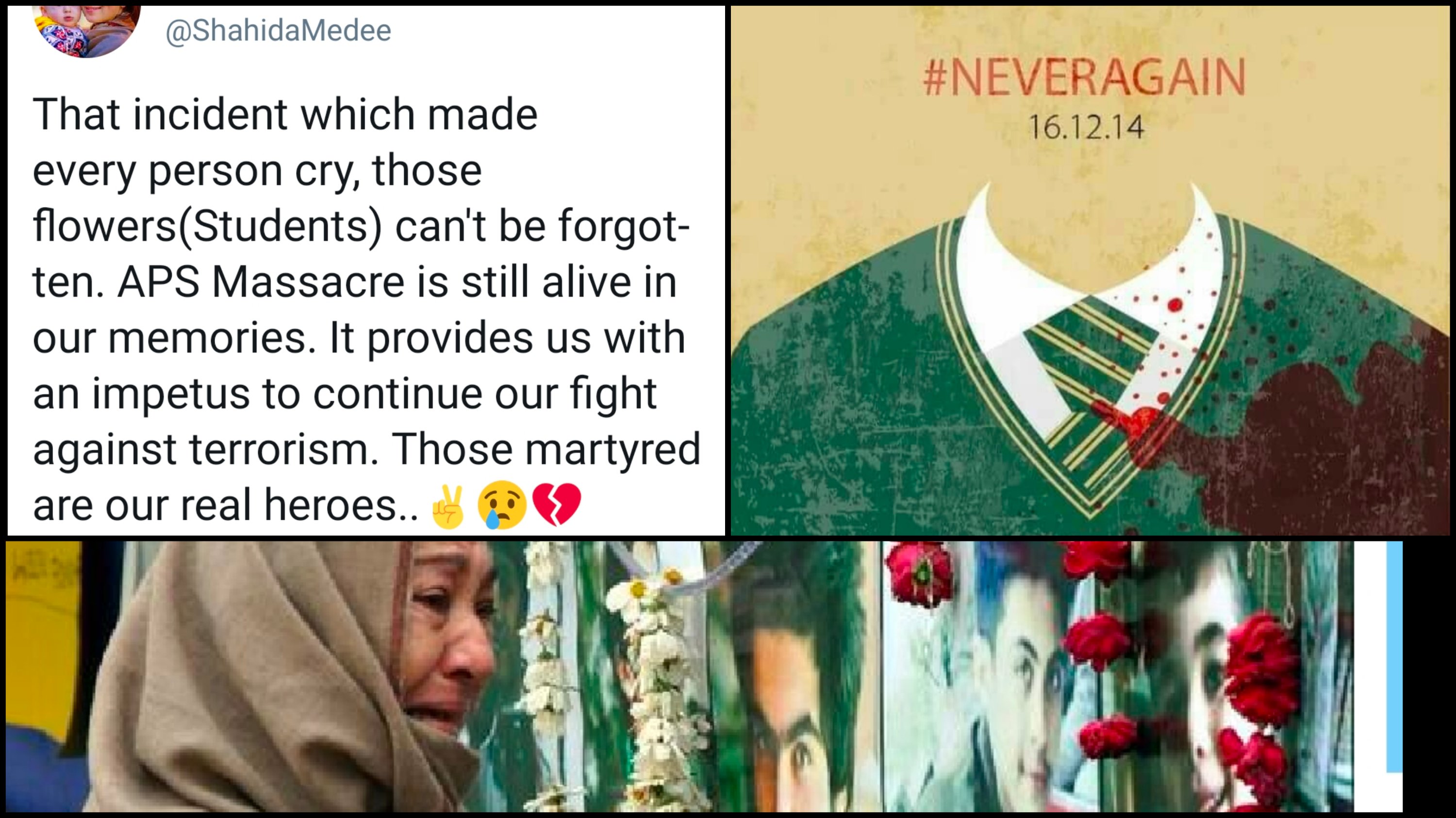 Remembering the innocent lives lost in #APSPeshawar attack on 16th of December 2014, a tragedy that left the nation with an irreplaceable loss. The nation is remembering its brave martyrs that sacrificed their lives in war against terrorism.

5 years after the horrific massacre, the wounds are still as fresh and the hearts still ache. Hashtags regarding the attack have been trending all over social media: 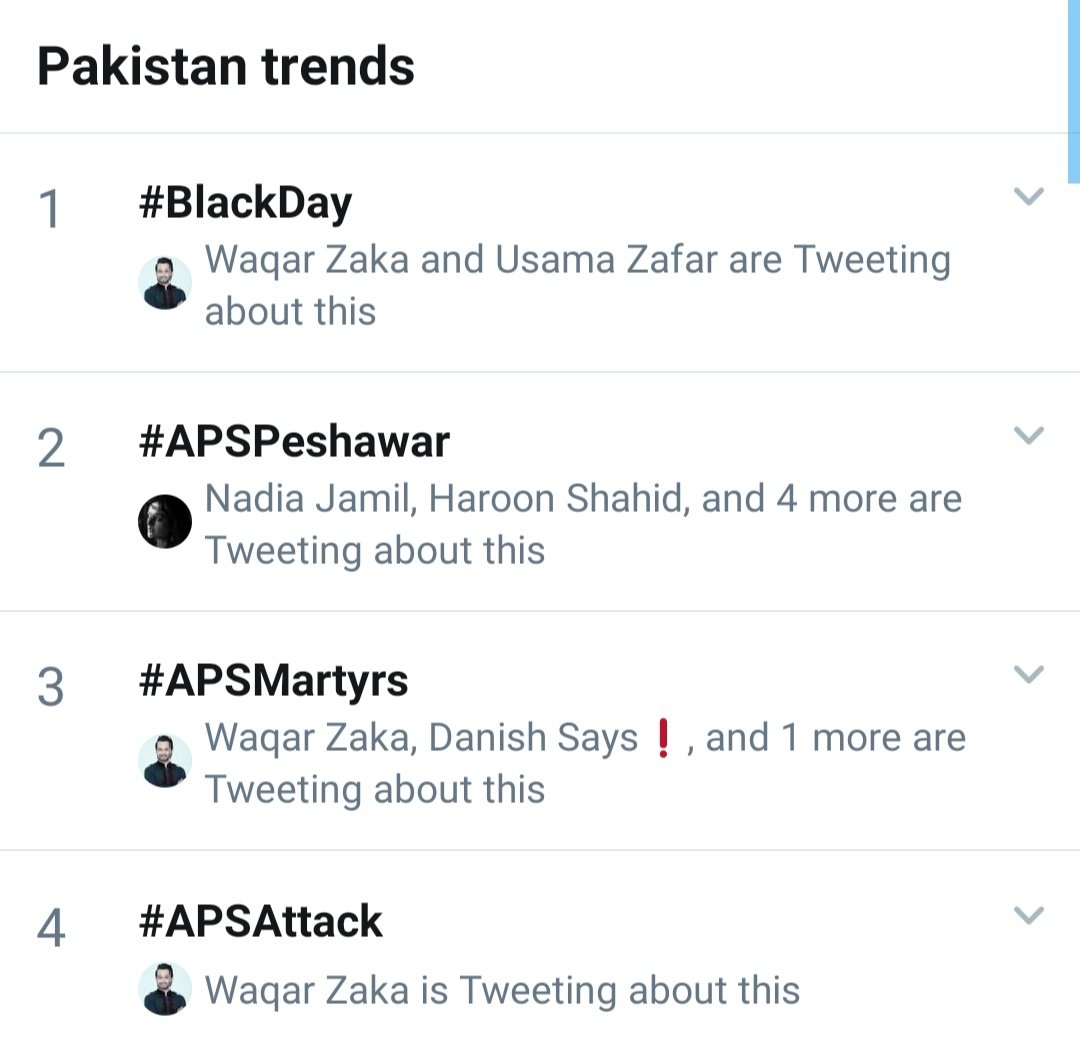 And people are saluting the young martyrs that left us a little too soon:

We pray the world never has to witness anything like this:

Please please, do not post pictures that relive the horrors of December 16th, 2014 #APSPeshawar #APSMartyrs #APSMassacre
Pray for the little souls, pray for the continued strength of their parents.
Make a commitment that you will never harm another life ever, except self defense

Yet another year passed and the incident of #APSPeshawar remained an aching wound in our hearts. A horrendous event, engulfing lives of many children, was the most heart wrenching event till today. No words can ever console the parents who lost their flowers in this tragedy.

Waqar Zaka shared what a traumatized eye witness had to say:

One day after the #APSPeshawarAttack , I met a survivor, eye witness student from Army Public School, Lady Reading Hospital, I still cant get his comments out of my head .#APSPeshawarAttack #APSMartyrs #BlackDay pic.twitter.com/Hn9RJVSvvD

That incident which made every person cry, those flowers(Students) can't be forgotten. APS Massacre is still alive in our memories. It provides us with an impetus to continue our fight against terrorism. Those martyred are our real heroes..✌️😢💔#APSPeshawar pic.twitter.com/zjujcWhEZQ

Their hearts so pure, eyes so innocent:

Ahmed Nawaz, who survived the attack on the #APSPeshawar has become the third pakistani to be awarded a point of light. pic.twitter.com/zwW20X7KdN

5 years ago butchers attacked our kids at #APSPeshawar
150 people including 134 children were martyred.
Today is the day to remember the families that sent their children to school&not into a battle zone.
..to resolve that never again this should happen to any child.#APSMartyrs pic.twitter.com/b5dVJB9ZVv

The pain, the sense of loss is something one can never get used to:

Some sick minded may think that #APSPeshawar was just an incident which happend and become the part of our past.
Their perception is wrong; the pain is very deep and can not be erase from our minds.#stopstateterrorism#StopHostingAPSKiller pic.twitter.com/wOYAEr1doJ

This is heart breaking:

A picture made by a girl who Lost her brother on 16 December 2014 Peshawar school attack 💔#APSPeshawar #BlackDay pic.twitter.com/UYU0pwIH88

There is no footprint too small to leave an imprint on this World #APSPeshawar #BlackDay pic.twitter.com/MY2tGGTZ4l

You should, you’re a warrior!

#WaleedKhan, you are our hero and pride. More power to you. Stay blessed #APSPeshawar pic.twitter.com/CqNx1fiLGz

Team diva stands in solidarity with the families of the APS martyrs and hope that we make the world a better place for our children.

Beauty and the Best: 10 Procedures That Make Dr. Tasneem Nakhoda Our Favourite Dermatologist!

Diva 2019 Round-Up: Female Models That Shined Through the Year