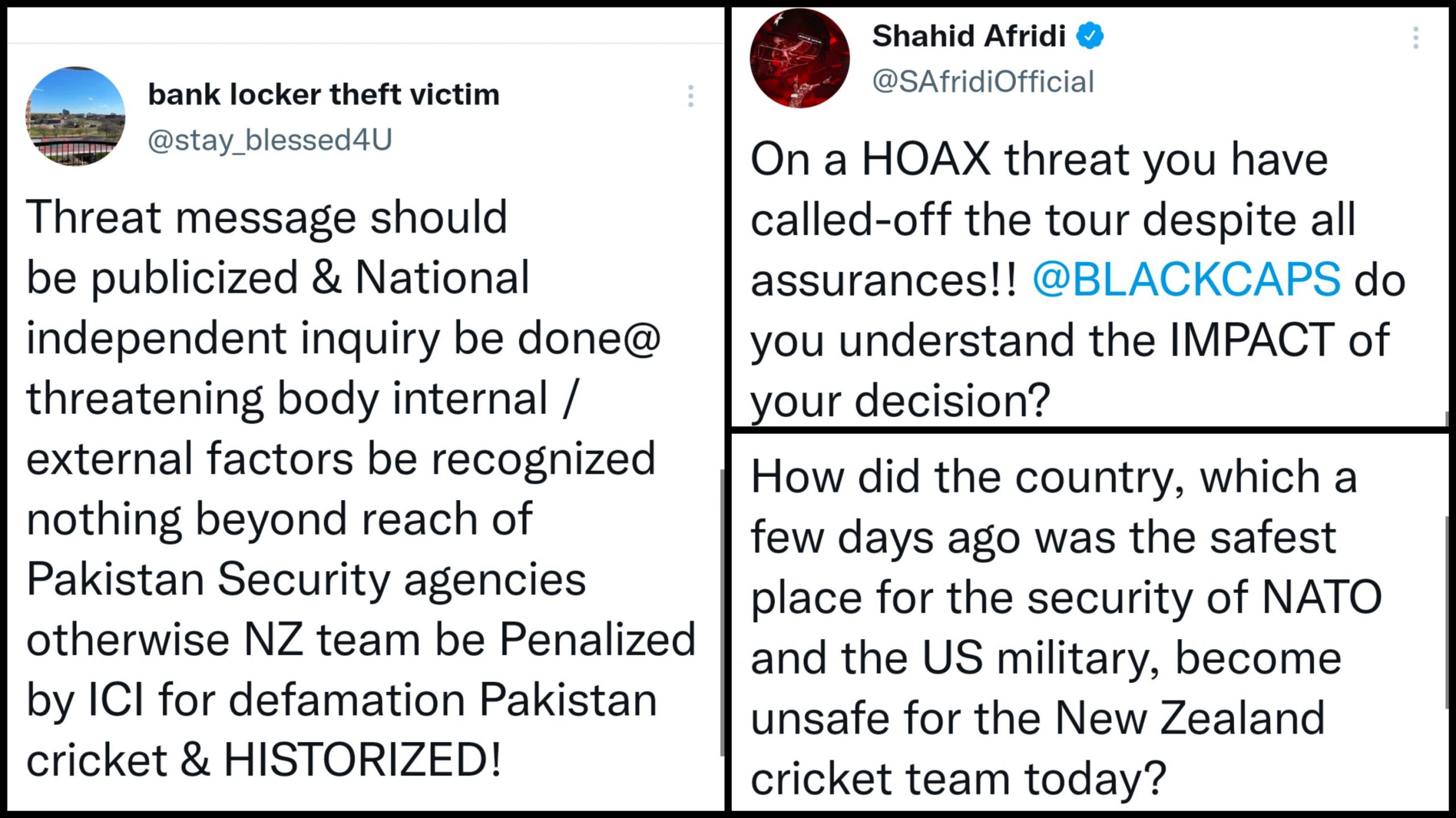 Despite all assurances from the Pakistani government and a positive security assessment, New Zealand Cricket has cancelled its Pakistan tour, citing “security threats” just before the start of the first ODI match.

And it’s left the nation and it’s cricket buffs angered:

On a HOAX threat you have called-off the tour despite all assurances!! @BLACKCAPS do you understand the IMPACT of your decision?

The hashtag #ShameOnBlackCaps has also been trending on Twitter:

How did the country, which a few days ago was the safest place for the security of NATO and the US military, become unsafe for the New Zealand cricket team today?
#PAKvNZ #BCCI #NZvPAK #PakistanZindabad #ShameOnBlackCaps #PakistanIsSafeforEveryone pic.twitter.com/fPMfZJH8hU

International fans were feeling for Pakistan:

This isn’t the one unfortunately! I’ve got a massive soft spot for Pakistan Cricket, always love the unpredictability of the teams, the quality of cricketers that Pakistan produces! They’re just a joy to watch 🥰 and Pakistan fans on this app are some of the best going as well! https://t.co/ct6Qkn2QhU

People were calling the abandonment irresponsible:

#ShameOnBlackCaps
After the attack on Bangladesh cricket in NZ and after the attack on a Mosque in New Zealand Christchurch, Pakistan was the first team to tour NZ. We showed the world that NZ was safe enough to play but this attitude of NZ is unacceptable.@SidrabilalSays

Heartbreaking💔 that the NZ cricket board & govt have cancelled this important tour despite knowing that all their security concerns were cleared n a call was made by our PM to ensure the security. #PAKvNZ #shameonblackcaps#PakistanIsSafeZone pic.twitter.com/RcBiVltkjl

People were calling it a planned conspiracy:

Citizens were assuring how Pakistan was safe for cricket:

Pakistan is more than safe https://t.co/42AClELggd

It is very strange: how such a huge decision came at the 11th hour? Very suspicious and very unprofessional! https://t.co/xT3Fi7yn2v

People were standing with PCB:

People were calling for an inquiry on the threat message:

Security of the New Zealand team, plus 2 helicopters were also monitored https://t.co/6ssaJ8CyMS pic.twitter.com/JMX6YDS1Lx

Our hearts really got broken. Its sucha big blow to us Pakistani's😔. We are hurt more then one can expect!our heads got down to the hole world💔 https://t.co/YZXvIUNXeB

People were calling it a murder:

#ShameOnBlackCaps
Nz cricketers were provided head of state level security, they were state’s guests here which means highest level of protection were given to them,our agencies successfully managedsecurity during various cricket events in last few years.This is so disappointing. pic.twitter.com/0GiIcYUDva

And while many empathised, others found it to be unprofessional:

I know emotions are running high at the moment, but you can't have a cricket board posting tweets of this sort. It's childish and unprofessional.
Such an aggressive stance – at least publicly on social media – doesn't help the situation at all.#PAKvNZ https://t.co/k4fILeulQh

People were sharing that the damage had been done:

Damage has been done. https://t.co/02vMrX0AmW

What do you think about the team abandoning the tour? Let us know in the comments below!