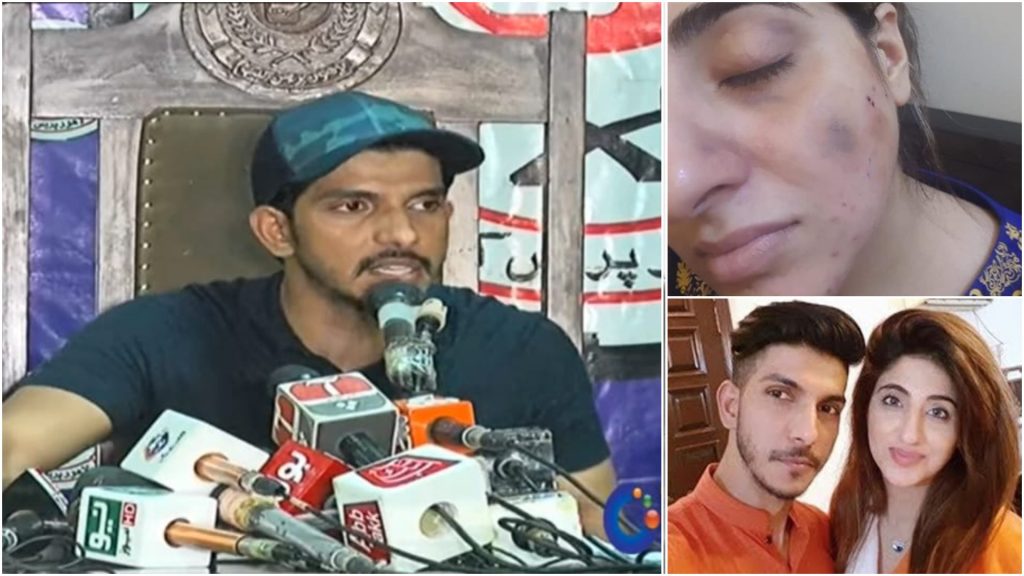 After being accused of domestic violence and cheating, Mohsin Abbas Haider called for a press conference which was aired live for everyone to watch

During the press conference Mohsin was under the oath of Quran and he revealed how the couple was having problems settling in together and how they weren’t on the same page which led to numerous fights between them. He also revealed that Fatema and him were not living together for the past 5-6 months. He also denied the allegations of beating her and said that the pictures Fatema shared are from when she fell down the stairs.

#MohsinAbbasHaidar
I am glad your wife took this advise pic.twitter.com/YlwjsIRZef

Soon after the allegations were made by Fatema, she was warned by many for what’s to come:

Fatima don’t be discouraged if any of this happens in next few days
1. Leaking any private video (can be a fake one)
2. Defamation suit
3. Mohsin Abbas’s statement (rotay huway)
4. Trolls defaming and discrediting you online while setting false narrative #MohsinAbbasHaider

Tomorrow Mohsin Abbas Haider will come up with a fake story where his wife is either CRAZY or she had affairs and he went into depression because of her! Sadly people are going to blame her anyway… because our society always finds flaws in the woman. Wait for the fake story!

As the press conference stared making rounds on the internet, the netizens were torn between who to believe, most of them didn’t buy a single word he said:

Shameful! Instead of being repentful or at least remotely sorry, Mohsin Abbas Haider has the audacity to start defaming his spouse. Oh, so because she would tell half truth, you could beat her up? Bringing religion in your sin..sick! #MohsinAbbasHaidar #MohsinAbbas pic.twitter.com/6BqRaRsiET

It was a CON-ference after all:

People also noticed how he hadn’t denied the claims of beating her:

This guy didn't deny the fact that he had beaten his wife. He didn't say anything about his girlfriend. He just told the stories of his life. there is no justification of #domesticviolence . One can't even hit a woman during the war. Screw you #MohsinAbbasHaidar!

Haha, zero marks for creativity in the story:

Says he's gonna tell his side and prove it with evidence. Proceeds to state its all a part of a conspiracy and my account was hacked lmao #MohsinAbbasHaidar

Mind you, during the entire press conference, #MohsinAbbasHaidar has his hand on Quran. Sure, bro, that's what abusers and sexual harassers do. Bring religion to defend themselves when nothing works. Only this time, #MohsinAbbasHaidar brought it out as the first weapon.

WHAT IN THE WORLD IS THIS MOHSIN ABBAS HAIDER??!!!
Islam gives him the right to marry another woman, but where was his “ISLAM” when he was beating the shit out of his first wife.
I am absolutely DISGUSTED. ALSO… #ShameOnYou #MohsinAbbasHaidar pic.twitter.com/qOa3so9e77

#MohsinAbbasHaidar in his press conference said that it’s his religious and legal right to take a second wife. Who’s going to tell this stupid c**t that religiously and legally he needs he needs his first wife’s approval to do so?

People were mocking him for playing the religion card without even thinking that his affair was the last thing his religion would want from him:

#MohsinAbbasHaidar playing the religion card calling second marriage his sharai haq and all I want to ask will he and his girlfriend take the sharai punishment for adultery?

People were mad at him for playing the SYED card:

So #MohsinAbbasHaidar has stooped so low, he is using SYED card, as vindication. All the time he kept beating about the bush, using personal stories to cover up his offense, telling irrelevant events and sweared on God so many times to prove his innocence? You are Exposed CUNT

Can't believe he played the Syed card. #MohsinAbbasHaidar, not in our name! Clearly not worthy of the title. https://t.co/MS1Fi104l7

People quickly picked up on the discrepencies in his side of the story:

Mohsin Abbas claims that the picture Fatema shared is from 2018. He doesn’t deny them.

So where’s the lie? She said he beat her during pregnancy and she was pregnant in 2018. What an asshole.

Not sure if biwi or maasi?

Constantly referring to your wife as your butler, her prime role being to serve you, cook for you, wash up after you. Not to mention justifying your right to 2nd marriage. Umm, ppl give a shit about you being a wife beater, not your trash bag cheating ass #MohsinAbbasHaider

Some had interesting theories:

Changing your behavior in 2 weeks and your sister’s testimony to your MAMOO doesn’t stand anywhere. He thinks he became saint already. He knew this was coming beforehand so started laying ground already. stop gaining sympathies by putting hands on Quran #MohsinAbbasHaidar

Many thought he was just beating around the bush:

WHAT the shit he's trying to say? WHY he's not coming to the point that he beat his wife or not ?
WHY he is giving us lame excuses?
And first of all WHY he's bringing Quran in that press conference?#MohsinAbbasHaidar #cancelled #EnoughIsEnough #TimesUp

Someone shared screenshots of a picture Nazish Jehangir shared with the caption ‘mine:’

Nazish Jahangir posted this few days back on her insta story! Nazish is the girl who has been accused of having in extramarital relationship with Mohsin Abbas Haider by his wife Fatema Sohail.

What kind of a man holds the Quran and speaks ill about his wife? What kind of a Syed would raise a hand on any women? Dude religion can not save you from this filth. Extra marital affairs are not allowed in our religion. Come up with something solid! #MohsinAbbasHaidar

Some found it unusual and unnecessary for him to bring in his taxes:

#MohsinAbbasHaidar "I'm a tax-payer of this country."

(side note: I've noticed that whenever a man is alleged of abuse/sexual harassment, he makes sure to mention that he pays/paid taxes. wonder where that comes from? 🤪🤔)

Some kept a close eye on his body language:

So #MohsinAbbasHaidar has stooped so low, he is using SYED card, as vindication. WOW. All the time he kept beating about the bush, using personal stories to cover up his offense,telling irrelevant events. Body language is a great science,could see the dread on his face throughout

I just saw clip of his press conference and anyone could easily see in his eyes that he's a bloody liar!!#MohsinAbbasHaidar a coward man!!!

I was expecting Mohsin to be creative with his excuse but that man pulled out the oldest trick in the book.

He swore on the holy book

A perpetrator of abuse will always use the most meaningless excuse 'their actions made me do this or provoke me'.There is NO excuse or other side of the story where there is physical abuse. Those who are saying this, you should be ashamed of being party to zulm!#MohsinAbbasHaidar

Some thought the presser was down right ridiculous:

Shame on u… it ia never okay to hit a woman no matter what. what a ridiculous press conference. She fell down the stairs right? Men like u are a disgrace to the society. #MohsinAbbasHaidar

Many shared reasons for not believing him:

I believe the allegations against #MohsinAbbasHaidar. I feel that the manner in which he answered the allegations belies an angry man who dislikes being crossed. #FatimaSohail

But ‘i PaY tAxEs AnD bILLs:’

ok so you paid the bills.. doesn't mean you fulfilled all your responsibilities.. does not mean you didn't cheat.. and certainly does NOT justify beating her.
Scumbag.#MohsinAbbasHaidar

A ton of people thought his toxic and narcissist attitude needed to go away:

People were just not convinced that the bruises Fatema had were from falling down the stairs:

I fell from stairs twice in my life. Once in England & in Islamabad at my home, call me clumsy. But I swear I didn't get a single bruise on my body. You lawyer sitting next to you should have come up with a better story. #MohsinAbbasHaidar #FatimaSohail

Can anyone explain,how these marks are sliding from stares..
And one thing more, man always slaps his wife, neither mother nor sister.. Biwi ko jageer smjhte hen. #MohsinAbbasHaidar pic.twitter.com/LjeCq3FPCV

Many wanted to try it on him, for science, just to compare the bruises:

Domestic violence is not acceptable.. This guy says his wife got the bruises from falling down the stairs. What a twat. Let me throw him down the stairs and we willl compare the bruises. Get a life man…. Industry should boycott him.#MohsinAbbasHaidar

Many were unsure why he’d point out Fatema playing the woman card and then bring in the religion card:

#MohsinAbbasHaidar Men accuse woman of playing the''woman card''then turn around and play Religion card and what does''main Syed family se belong karta hoon'' mean?That you are sooooSyed that you would never beat a woman?You would and then use religion card to justify it too.

#MohsinAbbasHaidar’s press conference is hard to watch. Using the “woman card” is speaking your truth and being bashed for it; only for the society to believe the man. His side of the story just shows his sick mindset, disgusting!

It's very shameful to use religion card in this type of matter. After beating his wife now he is doing her character assassination. The people who are supporting him are showing a patriarchal society. it's really sorrowful #MohsinAbbasHaidar

The entire press conference in a nutshell:

“She’s lying.”
“She fell down the stairs.”
“She wanted money”
“Aurat card.”
“Oh, and yes to answer your question, I am short tempered ngl.”#MohsinAbbasHaidar

Let it sink in:

Only pakistani men think fatima is lying! If this doesn't make you realize what the mindset is! what will? #justiceforfatima #MohsinAbbasHaidar

People bought up snippets from.a recent interview where Mohsin talked about having a really short and abusive temper:

Here’s another proof in this #mohsinabbashaider interview.. Absolutely horrified how his wife had to deal with this biggest CUNT .. Glad she finally getting rid of him… pic.twitter.com/02I807SJdA

Many wanted to steer clear of passing anymore judgments now that the Holy book was involved:

People started proving Mohsin guilty just by knowing one side of the story. I still want to say that if he has beaten his wife, it cannot be justified in any situation but as he has taken oath on Quran that he hasn't; so let the court decide who is right.#MohsinAbbasHaidar

With that being said, we believe that abuse has no other side, #TimesUp!

'Ready Steady No' is the funniest summer flick you'll watch – here's why!