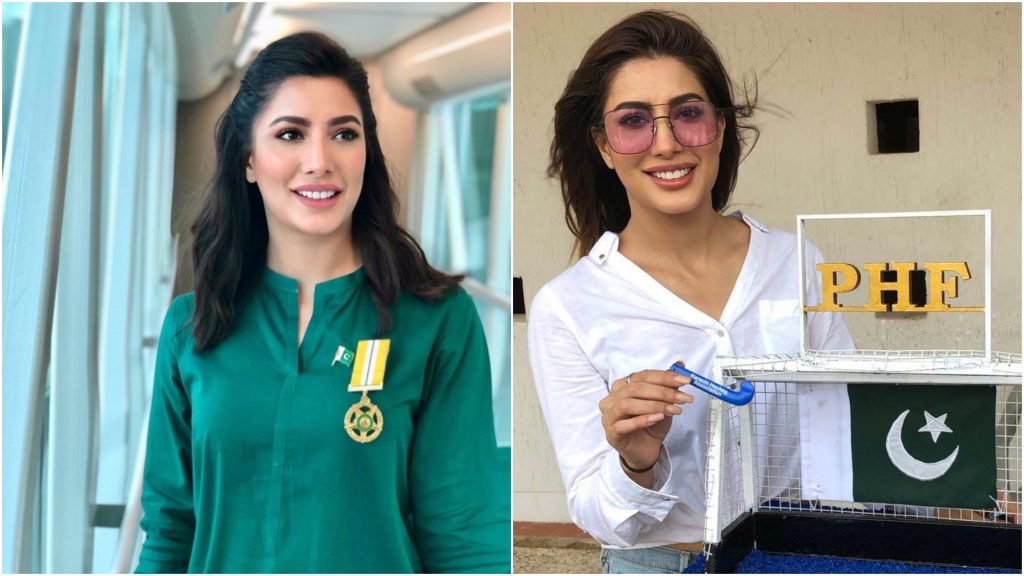 Mehwish Hayat has never failed to make us proud. Her very recent attempt to bring attention to the poor condition of hockey stadiums and the game in general paid off when the government took notice of the state of hockey in the country and we are immensely proud of her!

This is shocking state of affairs for hockey in Pak. We were world champions, Olympic champions – the best in the world.Wht happened to our national sport?! Like cinema, we need a revival of Hockey in Pak. We need to take drastic measures. No reason Y gold cannot be ours in Tokyo https://t.co/zA6UsTuz4E

Like the arts, sports also represents the nation internationally. We need the government and sponsors to step up and support the hockey federation and players. With credible committed people surely we can get to where we once were .. ✌🏻

Mehwish started this mission not by the comfort of her home, but by actually visiting the stadiums and meeting the teams:

Visited Abdul Sattar Edhi Hockey stadium & was appalled at wht I saw. Can’t believe that our national sport has fallen into such neglect. Frm the most successful team in the world; 4x world champions 3x Olympic Gold to no.17(lowest)in the world. Let’s not dwell on blame but ..1/2

It was a real pleasure to meet these fabulous girls in Sukkar and support this wonderful initiative. Glad to see that hockey has a future. 🤜🏻🤛🏻 https://t.co/38RxWFnoy0

Continuing our drive to get Pakistan Hockey to its former glory, visited an under 16 girls’ training camp in Sukkur. Heartened by what I saw. The passion 4 the sport is there in the young, just need to build on it.They are goin to be making Pakistan proud one day!💪🏻 InshaAllah!🇵🇰 pic.twitter.com/CqyrrVTVbR

Not only did she just visit to highlight the issue, but she also came up with ideas to boost hockey:

I'm glad tht the debate I initiated on the state of Pakistani sports is widening. I'm finding that it boils down to money. Wht we need is some commercial organisation to see how we can revive hockey &make it viable like PSL. Done right, A Pak Hockey league would be a big hit!🇵🇰🏑

The channel Geo promised to broadcast the semi-finals and finals of the National Hockey Championship live:

This is excellent news! I Am so glad that @geosupertv have stepped up to the mark and will be transmitting the semis and the final of the national hockey championships. 🏑This is only the first step. A long way to go to get hockey up to where it once was. #PakistanZindabad 🇵🇰👊🏻 https://t.co/sHU7SUWb2M

And alas, her efforts finally paid off:

Hard work never goes unnoticed. This made my day! The Sindh Govt has granted PHF Rs.10 crore of which 2.5 has already been handed over.👏The renaissance of Pakistan Hockey has truly begun – lets keep the pressure up & momentum going. We will get Gold in Tokyo 2024 InshaAllah 🇵🇰💪🏻 https://t.co/aW4a6WUEkl

People were lauding her for the success:

Kia bat hay mehwish you did it 🙂

People were proud of her:

Keep it up.
All sports lovers are with you.

Credit undoubtedly goes to you.. And we are with you in this cause

It's the best news in days. Bravo

People were appreciating her for the effort and wished more celebrities would follow her footsteps:

Your contribution and efforts to revive hockey sport are highly appreciated.

Indeed, she will be remembered for it:

#MehwishHayat what you are doing for betterment of hockey will be remembered by those who love this game …::
Rest assure you have adopted an #Orphan which remained “ dream game “ for this country youth

We absolutely stan a diva who puts her fame and power to the right use, Mehwish, you make us proud girl!