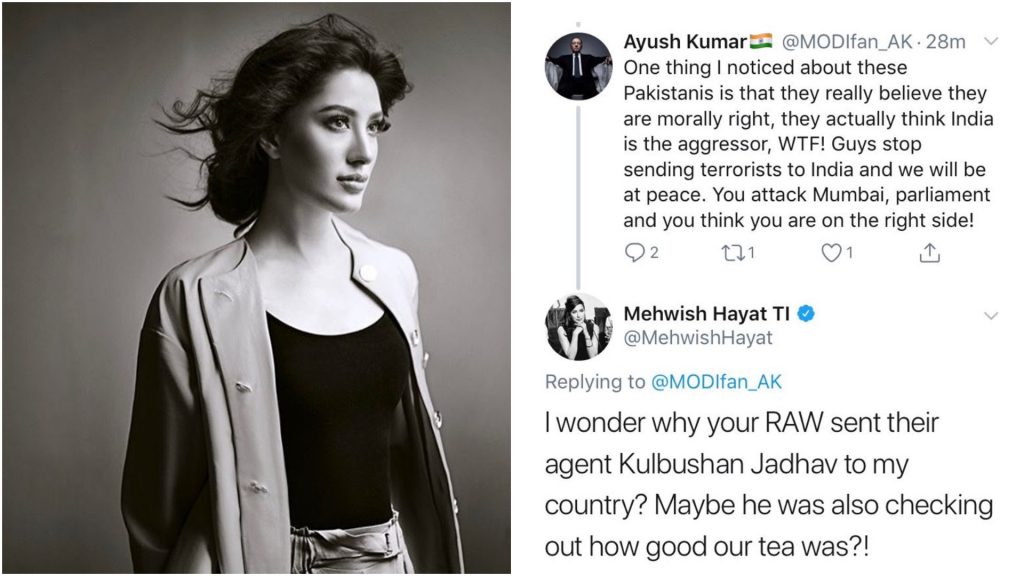 Mehwish Hayat has never been afraid to speak what’s on her mind, she’s fierce and she’s a force not to be reckoned with, which makes her our favorite diva! Mehwish Hayat was recently awarded the Pride of Performance award in Oslo, and apart from being thankful, Mehwish had a lot to say!

Was truly honoured to be in Oslo last night to receive the Pride of Performance award from Norway's Prime Minister, The Right Honourable, Madam @erna_solberg. A real proud moment for me to be bringing Pakistan's message of peace to Norway, home of the Nobel Peace Prize 🇳🇴🇵🇰 pic.twitter.com/m0bzCEE9d9

Mehwish preceded to say that even though Pakistan may not be the most peaceful country, the films produced by Hollywood have stereotyped us as vile monsters:

I was honoured to address distinguished guests in Oslo & talk abt film & peace.Also spoke abt how films frm Hollywood & our neighbours hv vilified Pakistan to a point that even I don't recognise the country that they show.Y is nobdy showing the sacrifices we hv made war on terror pic.twitter.com/hA6V1Q5m0q

She then mentions Bollywood and how they could have used their industry to promote peace between the countries but they chose to portray us as villains:

Bollywood could have used cinema to promote mutual understanding instead of vilifying us as they do. They need to decide which is more important – nationalistic fervour or a peaceful future . pic.twitter.com/EzcK4L0zWD

Mehwish then continued to say that artists need to think beyond nationalism and take a stand to show a more nuanced picture of our country via our films. And her speech has the internet going gaga over her, except for some Indians:

One thing I noticed about these Pakistanis is that they really believe they are morally right, they actually think India is the aggressor, WTF! Guys stop sending terrorists to India and we will be at peace. You attack Mumbai, parliament and you think you are on the right side!

But Mehwish came back at him:

I wonder why your RAW sent their agent Kulbushan Jadhav to my country? Maybe he was also checking out how good our tea was?!

Another Indian thought she had the answers to everything:

Answer is simple. Shut that terror ki dukaan JeM LeT JuD Taliban and stop that Nuke shit warning. We (both nations) started together but look where greed, violence and radicalisation have taken you. We are the toast of Silicon Valley, Wall Street, NASA. Gulf bans UR doctors.

But Mehwish put her right back in her place:

And the rest of the internet had found a new queen to stan!

In a world of #PriyankaChopra s, be a #MehwishHayat for the sake of humanity. So proud to back Government's decision of giving you National Award. Besides being a leading actress, nationalism and pain for humanity was enough to reward you. Actor + Peace Ambassador @MehwishHayat pic.twitter.com/nq7ZOeRVm1

People were proud of her for using the platform wisely, unlike Priyanka Chopra:

I'm sorry if I had cracked a joke when you received Tamgha-e-Imtiaz. You've used the platform in the best possible way to give voice to how many feel unlike Chooprra. Thank you. Well-deserved. https://t.co/6jNTkLXGNi

Even Mehr Tarar was in awe of Mehwish:

And you are gorgeous, very talented, and superbly articulate. So proud of you, my dear Mehwish 💖

Actresses like you can show Pakistan the way it is: vibrant, promising, hopeful, dynamic, multi-faceted, and ready to take on any challenge.

People were happy that she finally spoke for being misrepresented:

So happy that someone finally spoke up. It requires a lot of courage to speak on Misrepresentation and defamation of our country on such platform ♥️ #IndependenceDay Gift 🇵🇰 https://t.co/wkg4ZY5eZ1

She had people rooting for her:

Pakistani celebs are >>>>
In every situation in every controversy they always stand for right.#MehwishHayat ♥️♥️ https://t.co/Ax5On9J2lo

She has become the new desi girl who we all love to love:

Yaaas! No one deserved the award better than her:

And here is the reason why I said @MehwishHayat deserves a national award like tamgha e imtiaz! #MehwishHayat #tamghaeimtiaz No one speaks like this for Pakistan, no one at all. #PakistanZindabad #EidAlAdha #EidAdhaMubarak #oslo pic.twitter.com/6aXz4TRgdI

On one hand i heard #PriyankaChopra’s reply to #AyeshaMalik and I question UN, were her contributions enough to make her a peace ambassador?
While #MehwishHayat sounded much more logical, patriotic and peace loving.
PC you should learn from MH how to talk about peace. https://t.co/4f4dbepIPo

And Mehwish was clearly the winner:

People wanted this speech to be an example for people like Priyanka:

And that’s how you do it ⁦@priyankachopra⁩. Listen to ⁦@MehwishHayat⁩’s speech and learn a thing or two. ☺️#MehwishHayat #PriyankaChopra https://t.co/Bi2ZR0d3vk

People mentioned how Mehwish has always stood up for what’s right:

People are now appreciating @MehwishHayat for her speech which she delivered for Kashmir after winning an international award.
Guys, She deserves Tamgha e Imtiaz. She is not saying this for the first time, you are listening to this for the 1st time. Stop judging. Appreciate good!

So proud of @MehwishHayat , she deserves every award she won. I declare her #MissPakistan https://t.co/Wu1c1OZswX

She set an example of what everyone should strive to be like:

In a world full of stupid and assholes like Priyanka Chopra , be a sensible like Mehwish Hayat.

Yaaas, the queeeeen we stan!

Priyanka could never, we stan mehwish hayat from now on 🤝 https://t.co/9wuM5Qer2Q

What do you think about Mehwish Hayat’s speech? Let us know in the comments below!