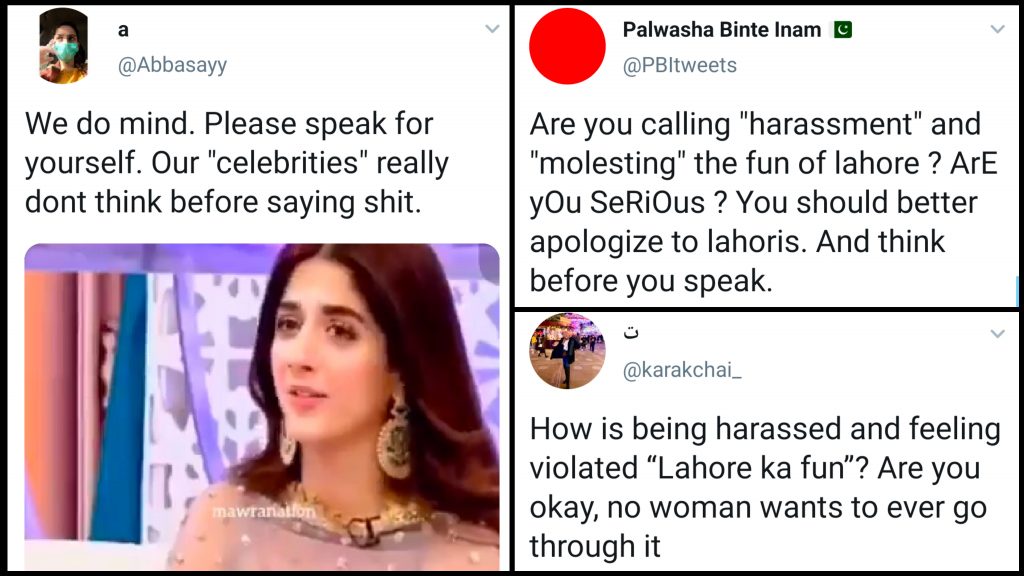 When it comes to expressing their stance on harassment and movements like #MeToo, our celebrities often find themselves confused and hesitant except a handful in the industry.

A snippet from Nida Yasir’s show featuring Mawra Hocane has been making rounds on social media where Mawra Hocane can be seen dismissing harassment as the vibe of Lahori Eid:

We do mind. Please speak for yourself. Our "celebrities" really dont think before saying shit. pic.twitter.com/MSVp5R15vr

And the netizens are furious at this casual dismissal of a very serious problem, and not to forget, demeaning the Lahoris altogether:

Many agreed how she’s never going to find herself in a situation like this:

Cause she knows she's not gonna be in a situation where she feels terrified.

Man. The shit these people say so casually is unbelievable. Literally anyone with two functional brain cells wouldn't ever trivialize something as serious as harassment like this. https://t.co/e0tToEaPVC

Not much has changed, has it?

The same actress, along with her sister, who said that depression is caused by a poor diet, feels that harassment is part of Lahori culture… 😐

Some politely asked her to rethink:

Dearest @MawraHocane you might be easy w "cherna", it might be a very cute lahori thing for you yay but we feel extremely unsafe and uncomfortable when we are cat-called like that. Please I beg u to RETHINK ur words before they come out of your mouth. STOP trivializing harassment https://t.co/PixzCjSYrv

People were so done with her:

Larkiyo ko cherna is a feel of lahore ?? No dumbo it's harrasment. You're insulting lahories by saying this. Hocane high on cocaine !!!! pic.twitter.com/IAyBs76b0j

MOST pakistani celebrities are dumb af and lack braincells. There’s literally only a handful who understand the value of their platform. https://t.co/jGyHdpeanL

Girls were coming for her!

People were tagging PEMRA and PTA to take notice of these morning shows:

This stupidity on television? And @PTAofficialpk @reportpemra why you guys don't ban these shitty morning shows?? This is seriously not ok. She's encouraging harassers. What the hell ! https://t.co/A0lchdL8nS

Is this woman brain dead? Last time she trivialised depression and now she’s normalising street harassment by calling it “fun” on national TV? She clearly has no brain of her own but does no one tell her to stop making a joke out of herself?? @MawraHocane https://t.co/QhSvnz5oNZ

omg yes lahore ka fun🤩 so much fun getting harass3d and cat-called🥰 just reminds me of authentic lahori fun😄‼️ https://t.co/X8HI7evhoZ

People were genuinely worried about her:

How is being harassed and feeling violated “Lahore ka fun”? Are you okay, no woman wants to ever go through it https://t.co/M0BUNPiFMk

People wanted her to apologise:

Are you calling "harassment" and "molesting" the fun of lahore ? ArE yOu SeRiOus ? You should better apologize to lahoris. And think before you speak. https://t.co/jdbwU50Ayr

People were questioning her credibility:

Imagine the credibility of posts written by her on #MeToo https://t.co/ZB6Z37RzvB

People were furious at the sad state of affairs:

Pakistani women: let's fight to stop harassment. It is unacceptab…

Irony has left the chat:

People wanted these celebrities to know the influence they have on people:

I don’t understand why do these people forget that they are public figures and people follow them. They should be careful about the statements they make https://t.co/Z1QEhjeAiv

What do you think about Mawra’s attack on Lahoris and dismissing harassment so casually? Let us know in the comments below!

No Ban On YouTube & TikTok, PUBG To Be Back Soon & Pakistanis Are Breathing A Sigh Of Relief!

7 Pakistani Fashion Show Directors Who Have Changed The Runway!