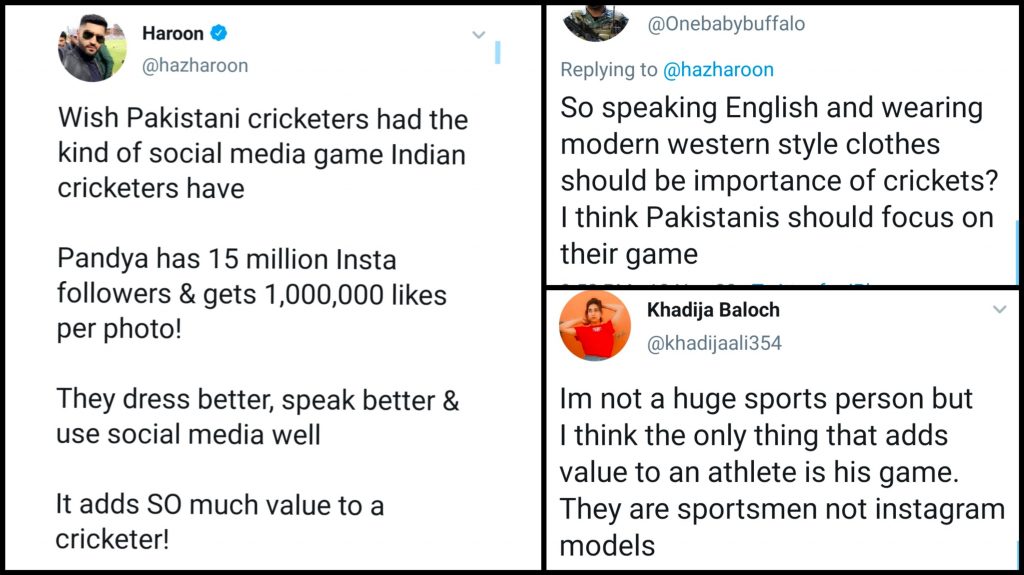 It adds SO much value to a cricketer! pic.twitter.com/RrV3Qo651w

Taking to twitter, a man shared how Pakistani cricketers should up their social media game, dress well, speak better English because it adds value to them, but people disagree!

So speaking English and wearing modern western style clothes should be importance of crickets? I think Pakistanis should focus on their game

I drool over Babar. Doesn't speak English. Doesn't have 15 million followers. Proper Lahori accent. But people love that guy, I love him. No need to mould players into something. He doesn't know how to use social media but he loves to drive the ball. That matters? Hell yeah! https://t.co/mTvx46S70x

People didn’t find the need for cricketers to be influencers:

Why!? They're cricketers. It's nice when they use their influence for good…but they don't need to be influencers????

This is a really weird take honestly. This isn't even good dressing, they look like class 10 students in these outfits but REGARDLESS who cares how they're dressed??? Why do we need them to speak great English?? Or needs them to show off a rich af lifestyle?? https://t.co/X5OSlj4aNE

Some found that there was no room for comparison:

Our cricketers are a reflection of the country as a whole..lower literacy rate , lower salaries.. difficult to match India..

Exposure will get them better eventually but as long as they're contributing to the team, who cares if it is jaunsa or inshaAllah boys played well https://t.co/cuYz36Jrks

Many shared how Pandya was hardly the example cricketers should follow:

Pandya is hardly the example you wanna give to sportsmen about how to conduct themselves on the media. He's one of the most controversial sports personalities, even within Indian folds.

Also, likes/followers are often bought. And literally anyone can do that these days. https://t.co/biYkG1YLSa

i understand your point as a manager but as a fan it's quite a buzzkill to see ads masquerading as genuine opinions on over-curated bollywood type feeds. also, khuda ke waastay give our players a better role model to emulate than pandya! https://t.co/sYpokx2VPc

Of all the cricketers in the world, he choose Pandya for comparison. The one who almost lost his place in team because of an interview.

Now compare Imran and Wasim with Kapil Dev and Javedagal Srinath. Just that there was no instagram in the 80s and 90s. https://t.co/6mvoFttWAR

People were sharing cricketers who were getting the job done without SM presence:

Disagree here! Getting engagements on social media has no tangible impact on the performance of a cricketer on field, which last I checked, was a cricketer's primary job to be honest – The rest all is tertiary.

Our best player Babar has minimum SM footprint yet gets the job done https://t.co/PpdIJlePQt

People were sharing how social media has nothing to do with the game:

Yes, it's good for the potential of ads and all, but if you are a big enough name you will get ads regardless, how do you become a big name? By being good on the field. https://t.co/tS6xxFkXtm

It adds SO much value to a cricketer!"

No, it doesn't at all. Alastair Cook never used social media during his playing career nor does so now. Did it lower his value in any way? No. https://t.co/Ef1GRAJqGR

Rather be humble and good at the game than have social media clout and take photos like they’re still in high school lekin hum tou har match haartay hain https://t.co/FOXhntOUkz

If having shit loads of insta followers makes you a better Cricketer, then I can't wait to see one of the Kardashian people open the batting on Boxing Day https://t.co/XItPWPhRxJ

Im not a huge sports person but I think the only thing that adds value to an athlete is his game. They are sportsmen not instagram models https://t.co/qa5LUnu4Du

It’s just as simple as this!

dc as long as they play good cricket and justify their selection, players evolving and becoming world-class adds to their brand, not other way around https://t.co/7rI7rBwJ1E

In case you didn’t notice, India’s SM presence is more than 6 times of ours. Furthermore the guy on the left who ‘speaks better’ was suspended for his words on a tv show

PCB is doing a fair job in grooming our players & their SM. Its their performance everyone truly cares about https://t.co/2LNlRnc0Ju

People did agree on some things:

Worst kind of logic is this. How can someone say Pandya dresses good? What kind of impact does Social Media game can have on a player? ZERO.

What are your thoughts on this? Let us know in the comments below!

10 Places To Travel In Pakistan During The Pandemic!

5 Pakistani Actresses We Cannot Stop Loving in Dramas of 2020!