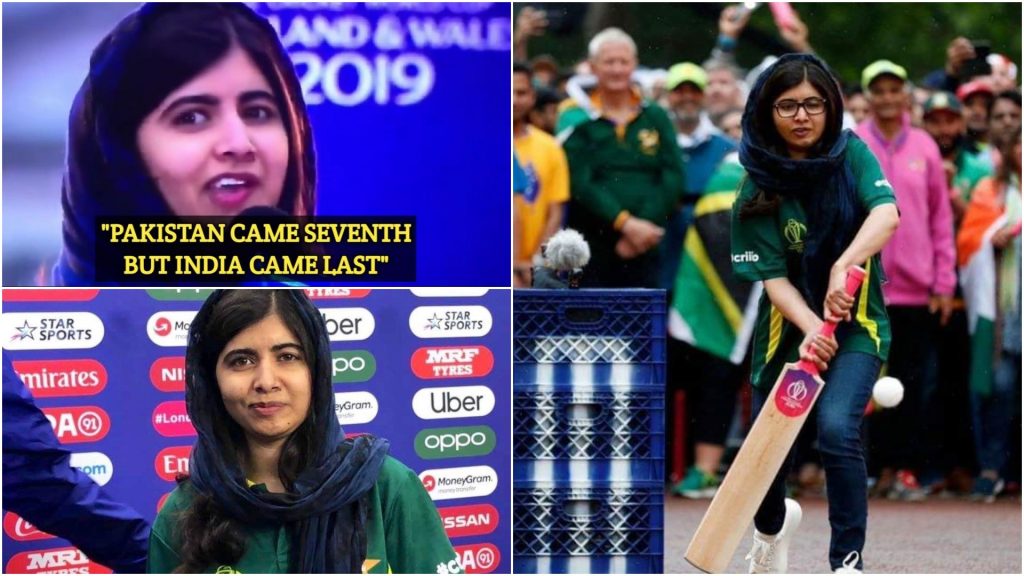 Sharing her thoughts over Pakistan maintaining seventh place with 38 points during the ODI games, Malala trolled the Indian team saying that in comparison, they scored the last position with only 19 points. “Pakistan, we were okay, not too bad, came number 7 but India came last!” she said.

Cheeky and spot on as always @Malala! How I love this girl👌😂

"Pakistan we were ok, not too bad-came No 7 but India came last so I think for Pakistan that's what….but India played really well"
🏏#WorldCup2019 #Pakistan #CWC19 #WeHaveWeWill pic.twitter.com/BuP465pSSv

She further added that she hopes that the game unites people and is played in the right spirit, but it was too late!

You know it’s going to be a great World Cup when you’ve got a Nobel Peace prize winner kicking this off. @Malala spreading the 💞#CWC19 pic.twitter.com/GyfXifqsom

The Pakistanis were all for it!

Just got back from the #CWC19 opening ceremony. Can not describe the feeling i felt when they said "representing Pakistan, is Nobel Peace Prize winner Malala Yousafzai"… i had goosebumps.. everyone cheered for her! Oh and we beat India in the 60 second cricket challenge 😆

In fact, they were loving it!

"Pakistan, we were okay, not too bad, came No. 7…. but India came last!", Malala Yousufzai.

Some even offered a bit of Burnol to, you know, soothe the burn

A girl who is disowned by many in her own country, Malala Yousafzai, wearing Green Shirt is representing Pakistan at the Cricket World Cup opening ceremony. I will offer free Burnol for all @Malala haters 😉#CWC19#Malala pic.twitter.com/jqM9tkOeA8

For some, she made their day!

Well done malala u made my day (india is on last we) 😂 #SarfarazAhmed pic.twitter.com/mKrnPUW6bl

I understand your sentiments but I am inclined to think she said that in zest. Besides, it’s just sports and we do take sides. Isn’t it?

If it was said in humour(which I think it was), then it's not such a problem because India is a growing economy anyway. Malala is just a representative of various girls who have been and are being exploited in those regions of the world. Her mockery of India means nothing to us..

True that, it wasn’t that deep y’all!

y'all are really attacking malala for that joke….my loves, go outside & get some air, it was never that deep

Indians get angry for a Pakistani supporting Pakistan is the saddest thing I've seen all day.

And again, people these days can be triggered by almost anything!

They had a mini competition during the opening ceremony. Pakistan came 7th and Infia came in 10th. That's what all these people in the comments are losing their minds over an questioning a girl's integrity and motives over.

Exactly, repeat after me: it’s just a game!

Calm down man. It's just a game. Not even an official match. Shes Pakistani, theres a rivalry. It's actually quite funny.

Although the comment was meant to be taken on a lighter note, not everyone took it in the right spirit, with some people on Twitter calling it a display of hate towards India.

An essential condition for winning a nobel for peace is to rise above petty and hateful nationalism. You clearly don't deserve the award @Malala

Feel free to block me like you block anyone who points out your hypocrisy 😄 pic.twitter.com/rzNNSIQwfY

Some said the fame had gotten to her head

You cheer for the country from which you fled, which you are afraid to stay even now and you demean India which holds a 6-0 Record in real WC encounters. Lady, the game is on 16th and we Indians will have a smile then. This is what happens when fame gets into one's head.@Malala pic.twitter.com/upIQhj5xX3

Some were confused as to why she was invited

Don't know why ICC invited Malala, that Nobel Prize winner said Pakistan will be happy that they came 7th(in 60 second game) because India came last. Absolute state of her who came representing Pakistan.

It is shsmeful @Malala people in India have high regards for you, pakistan is ur home country we can understand the love u have for it but u were one of the biggest example of Pakistan's sponsored terrorism. U hold noble peace prize please speak according to the honour u hold

Nobel Peace Prize Winner – tells the crowd, "Pakistan, we were okay, not too bad, came No.7.. but India came last!"

"A Pakistani will remain Pakistani" no matter how many awards/prizes conferred on him/her.#Malala @Malalahttps://t.co/3z7khWF9IA pic.twitter.com/th9ClAkt31

Some added in a pinch of humour

“Pakistan, we were okay, not too bad. We came seventh. But at least we were not last like India,” @Malala @TrulyMonica pic.twitter.com/TgK3vaD86w

Some called her a typical Pakistani for sharing such thoughts

" We did well, we were 7th but India finished last, that's what matters for Pakistanis "
Typical Paki thoughts 😒🌚

But some of them had killer comebacks, for real!

Their benchmark is India. You cant blame her.

Some called it an obsession

What is Pakistan's fixation with India, especially when you have 6 people ahead of you but India coming last matters more? This is from someone who doesn't even live in the country anymore, won a Nobel Peace Prize, and is supposed to be the 'change'. #ObsessionIsReal #Malala https://t.co/G06kEhvJP3

People were so furious that they started swearing, tsk tsk!

Dear #Malala Your finally showed your real colors. @Malala You proved that you're a real PAKISTANI. You are just a piece of shit in the name of your show called GLOBAL PEACE. I have never seen any of your thoughts over Pulwama Terror Attack. You're a biased bitch. pic.twitter.com/QrtHDydsbC

Some had their ‘theories!’

1st of all malala isnt only pakistan national, she should not have represented us.. and second of all unfortunately was all politics behind this shit #CWC19

What do you think about Malala’s statement in the opening ceremony? Are people taking it out of context and over-reacting or are people too sensitive to take a joke? Let us know in the comments below!

Iman Aly just took a Blurfie and she wants you all to take one too!

The trailer for 'Baaji – The Film' is out and it's everything you would want to see!