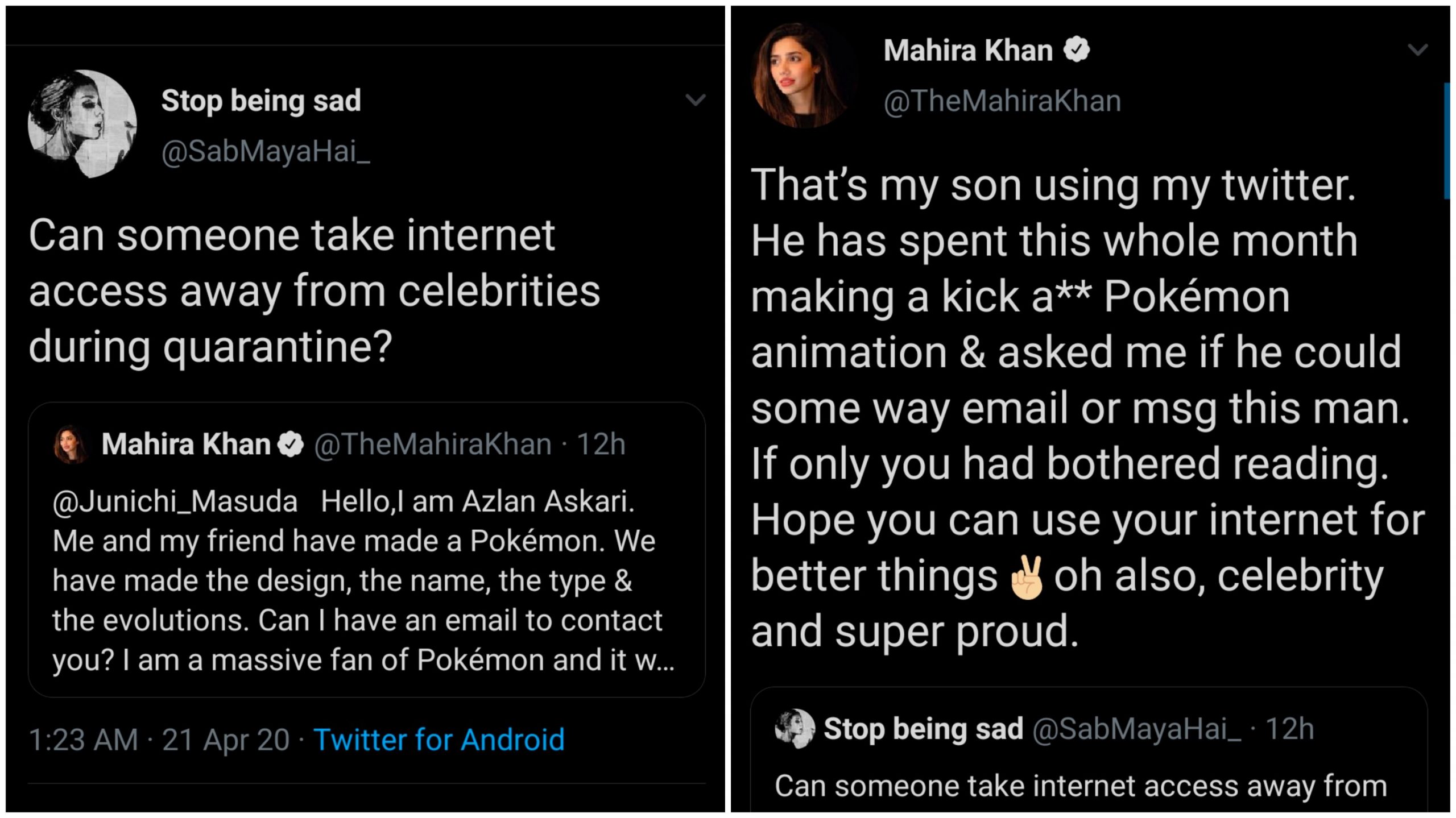 Being a celebrity is no easy feat. They constantly get toasted, grilled and fried for every little thing they do by people! With time, celebrities tend to grow thicker skin but don’t take any crap when it comes to their families. And Mahira Khan is no exception.

Mahira’s son Azlan Askari used his mom’s Twitter to contact composer, director and producer of Pokemon, Junichi Masuda, explaining how he and his friend have created a new Pokemon, and it would be a dream come true if his creation could be added in the Pokemon world.

Mahira defended her son Azlan Askari against trolls on Twitter and proudly claims her title as a celebrity.

@Junichi_Masuda Hello,I am Azlan Askari. Me and my friend have made a Pokémon. We have made the design, the name, the type & the evolutions. Can I have an email to contact you? I am a massive fan of Pokémon and it would make my dream come true if you put my Pokémon in the game.

And Mahira’s fans were rooting for Azlan to succeed!

@Junichi_Masuda please look at this! ❤️

Some were very supportive:

Ayeee would love to see his animated work someday😍

People were sending him love and prayers:

And while Azlan received tons of love and support, someone tweeted out how internet access should be taken away from celebrities during quarantine:

Can someone take internet access away from celebrities during quarantine? https://t.co/lFtyBAKC17

Disappointed with the trolling, Mahira Khan actually came back at the troll with facts and shared how her son spent an entire month working on the animation:

That’s my son using my twitter. He has spent this whole month making a kick a** Pokémon animation & asked me if he could some way email or msg this man. If only you had bothered reading. Hope you can use your internet for better things✌🏼oh also, celebrity and super proud. https://t.co/khbCfzAE4k

And the internet was standing with her!

I think they should take away internet access from common people too.. and start from you!! https://t.co/70CfomjRKm

People were finding her reply to be savage!

People were loving this side of her!

I absolutely love this side of yours👊💖 Also, some people really do need to get a life🤦 https://t.co/odSXeQtngJ

Loveee this kicka** side of urs!!!

You really don’t want to mess with Mahira Khan the mommy:

Some were sharing how people these days can make an issue out of anything:

These days people just make an issue out of non-issues 🤯

Fans were proud of her for not being rude:

so proud of you for handling things with kindness. love u 💘

Some had suggestions for next time:

Being a mother myself, I would keep my children away from social media until they're 16. Your son should have contacted Pokemon via a private message, with you as the messenger. Social media is a cruel place and can be insulting for children.

People were still in awe of Azlan for putting his time to good use:

Awwwiee that’s wonderful @TheMahiraKhan . You don’t need to respond to such people. I feel like it’s amazing that Azlaan has been so creative and it’s great that he’s putting such good use to this time. Lots of love, plus I would love to see his animation.💖

Some had just found out that she had a son 😂

True that, bachas are off limits!

Good luck to your son. Being nice is hard for some people.loved your reply.our bachas are off limits!!

People were sympathizing with her:

Blimey, I'm so sorry Mahira. Some people are absolutely vile and also unjustly unfair on others jus because they're somehow celebs. They don't realise celebs are humans too with a personal life. Proud of your son and of you for supporting him and his talent like this. Well done.

Some fans were not in favour of replying to trolls:

But Mahira had her reasons:

What do you think about Mahira’s response? Let us know in the comments below!