Only a true Karachiite can relate to the joy of a good monsoon season! For a city that witnesses hot temperature throughout the year, the monsoon rains bring us sheer bliss! As soon as it started raining, the netizens took it to Twitter to share the love, making #KarachiRains the top trending hashtag: 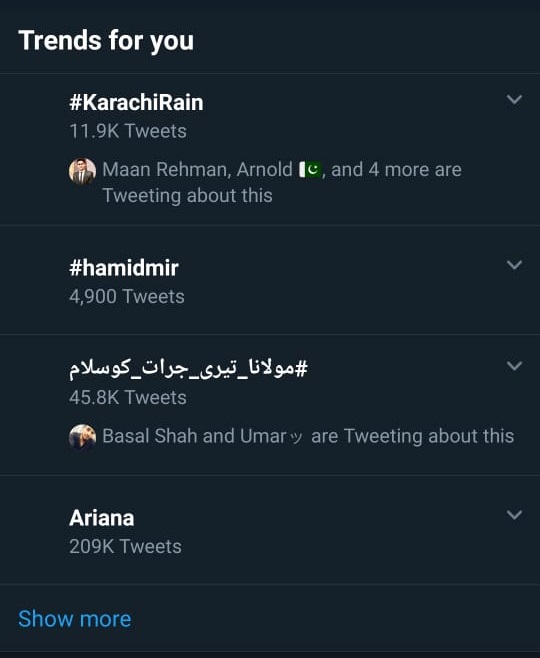 And as the heavy rainfall continued, the internet had a lot to share:

Literally all of us:

Mums were getting down to serious talks with the CEOs, such cuties!

My mom called me at work today to ask me for my CEO's number so she could talk to him like he's the principal of my school or sth and tell him to close work early because of the baarish.

Me: ma, this isn't how this works
Ma: you give me his number, I will talk. pic.twitter.com/6nox0iqAOI

Salute to these traffic gaurds taking full responsibility to control and lookafter for people endangering themselves ❤🇵🇰
#KarachiRain#KarachiRain pic.twitter.com/kSOi1UNoL2

If the word perfection was summed in a video:

That’s how deprived we’ve been:

its been 14 hours and rain didn't stop yet
karachi wala be like . #KarachiRain pic.twitter.com/bhRno8Q0pt

People shared how they were enjoying amazing kachoris!

There were some heart breaking revelations…

Truth has been spoken!

People were calling it an angry rainfall:

The rain had them all thinking:

There were some genius ideas, google?

Alongside traffic congestion indicators, google maps should come up with water level indicators for different routes, believe me it will be extremely helpful @googlemaps @AliHZaidiPTI #KarachiRain

People did not forget PTCL and their broadband service 😂

And while many offices called it a day off, others had to go:

Karachi-ites when it first starts to rain: 'Hooray!' 'Allah ka shukar hai!' 'How romantic!' 'Chai, pakora time!'
Karachi-ites after it rains for more than 15 minutes and they realise the city has no infrastructure to deal with this:
😳😭😳😭😳😭😳😭😳😭😳😭😳 #KarachiRain

Somebody made this mesmerizing slow-mo of the rain drops falling in all their glory: 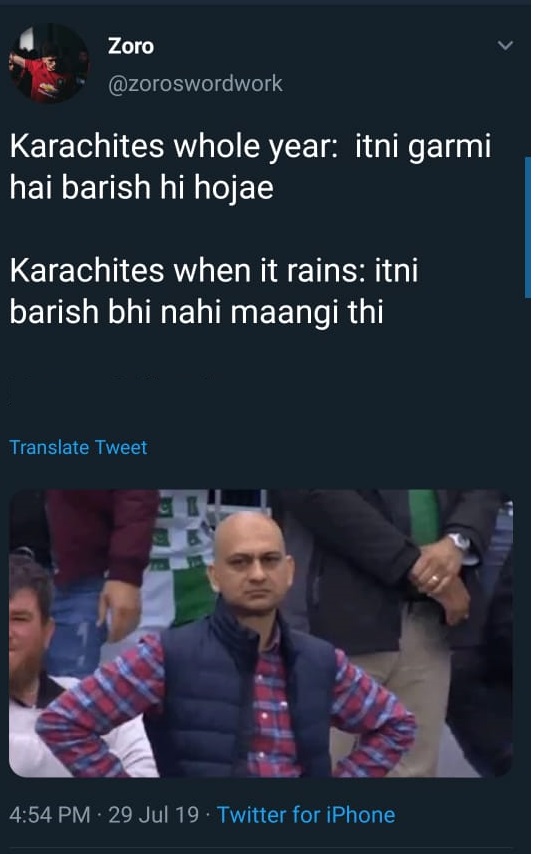 People were loving every bit of it:

Nothing better than a soothing long drive during rain. The much-needed #RainInKarachi for the last several hours. Loving the #KarachiRain. Stay safe everyone and enjoy the pleasant #KarachiWeather. pic.twitter.com/OeHIJiVyvU

People were creating awareness for others:

Every school in karachi must cover electric poles near their schools due to possible rains in next few days. This is acutally the duty of #KE but those irresponsible culprits are waiting for incidents to be happen. @KElectricPk #KarachiRain pic.twitter.com/gCsMc29N4U

As much as I love the rain, that love is always tainted with the knowledge that someone somewhere in this city will die because of live wires and poor sewerage systems. #KarachiRain #MomentOfSilence

Love the city or hate it, it is one of the happiest cities when it’s raining and despite all the hardships we go through during the rain, this city yearns for rain!

Reporter covering flood in neck-deep water is winning the internet!

Power Clothing: How the Politicians of Pakistan Defined Fashion