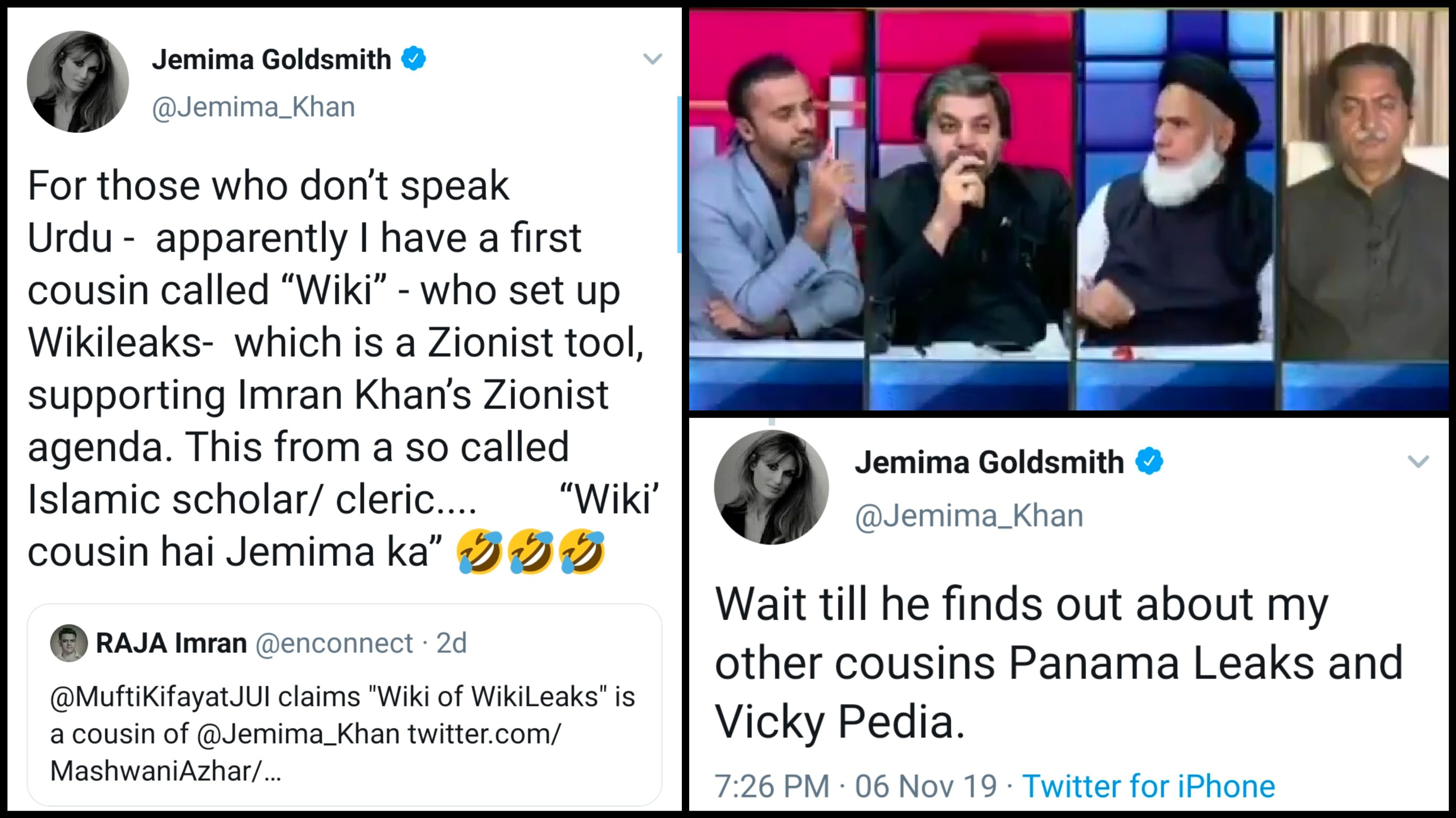 Jemima just found out about her cousin Wiki from Wikileaks, thanks to Mufti Kifayatullah!

During Waseem Badami’s show 11th hour, Mufti Kifayatullah revealed how he’s sure that Wiki, who he thinks is behind Wikileaks is Jemima Goldsmith’s cousin and you need to see the video to believe us!

Mufti kifayatullah tells in detail about the “Vicky” of wikileaks who according to him is cousin of @Jemima_Khan @ImranKhanPTI pic.twitter.com/IjYtnTqHF5

In a tweet, Waseem Badami shared a 2 minute clip where him and Mufti Kifayatullah are arguing about an apparent Wiki from Wikileaks and despite Waseem Badami trying to to tell him that the person behind Wikileaks is Julian Assange, Mufti sahab was adamant that his nickname was Wiki. The tweet soon reached Jemima Goldsmith and she too was shocked to find out about her cousin 😂

For those who don’t speak Urdu – apparently I have a first cousin called “Wiki” – who set up Wikileaks- which is a Zionist tool, supporting Imran Khan’s Zionist agenda. This from a so called Islamic scholar/ cleric…. “Wiki’ cousin hai Jemima ka” 🤣🤣🤣 https://t.co/BaWmWyPxFt

Jemima then tweeted how she can’t wait for him to find out about her other “cousins:”

Wait till he finds out about my other cousins Panama Leaks and Vicky Pedia.

And the internet was having a great time:

Apprarently your cousin “#Vicky” is very famous in #Pakistan. Say our love to him. 😂

Waiting for the next great exposé:

You just wait till he exposes your other causin, Panama.

And Panama Leaks is the mother of Wiki Leaks.

Some were living for the entertainment:

Please let us have some entertainment in Pakistan. We are an entertainment starved nations and these ignorant political Mullahs provide us enough circus acts to keep us laughing for weeks.

In the meanwhile, @Jemima_Khan, please give my regards to your cousin Wiki.

You learn something new everyday…

This was also a new information for Pakistanis 😂😂

Some were waiting for the family reunion:

People were requesting Jemima to stop his cousins:

Please control your cousin Wiki, he always does propaganda against Nawaz Sharif, Zardari, Molana Diesel and leaders around the glob 😠

They do match waisay, Jemima and Panama, hmm:

Next leak….."Panama is sister of jamima😂😂"
As the name matches

Some were tweeting Imran Khan’s possible reaction to her tweet:

A cousin she didn’t know she had:

Congratulations Ma'am for the discovery of your new first cousin "Wicky". 🤣🤣

People were living for Jemima’s sarcasm:

Her sarcasm is lit AF https://t.co/oEs1chAKxA

And even though it was hilarious, it made people realize things:

It’s hilarious 😂 😂🤣
But…there is also a very serious aspect to this. God forbid if this political misadventures of MFR succeeded (as per his aspirations), this so-called Islamic cleric would hv been a senior member of his Cabinet. One should imagine him in that position.

I dont know wether i should laugh or cry tears on the state of our so-called Ullamas & Muftis.#VickyLeaks https://t.co/dAJ4tmps8T

What do you think about Mufti Kifayatullah’s theories? Let us know in the comments below!

The Final Cut: 10 Pakistani Models Who Turned Into Actors!