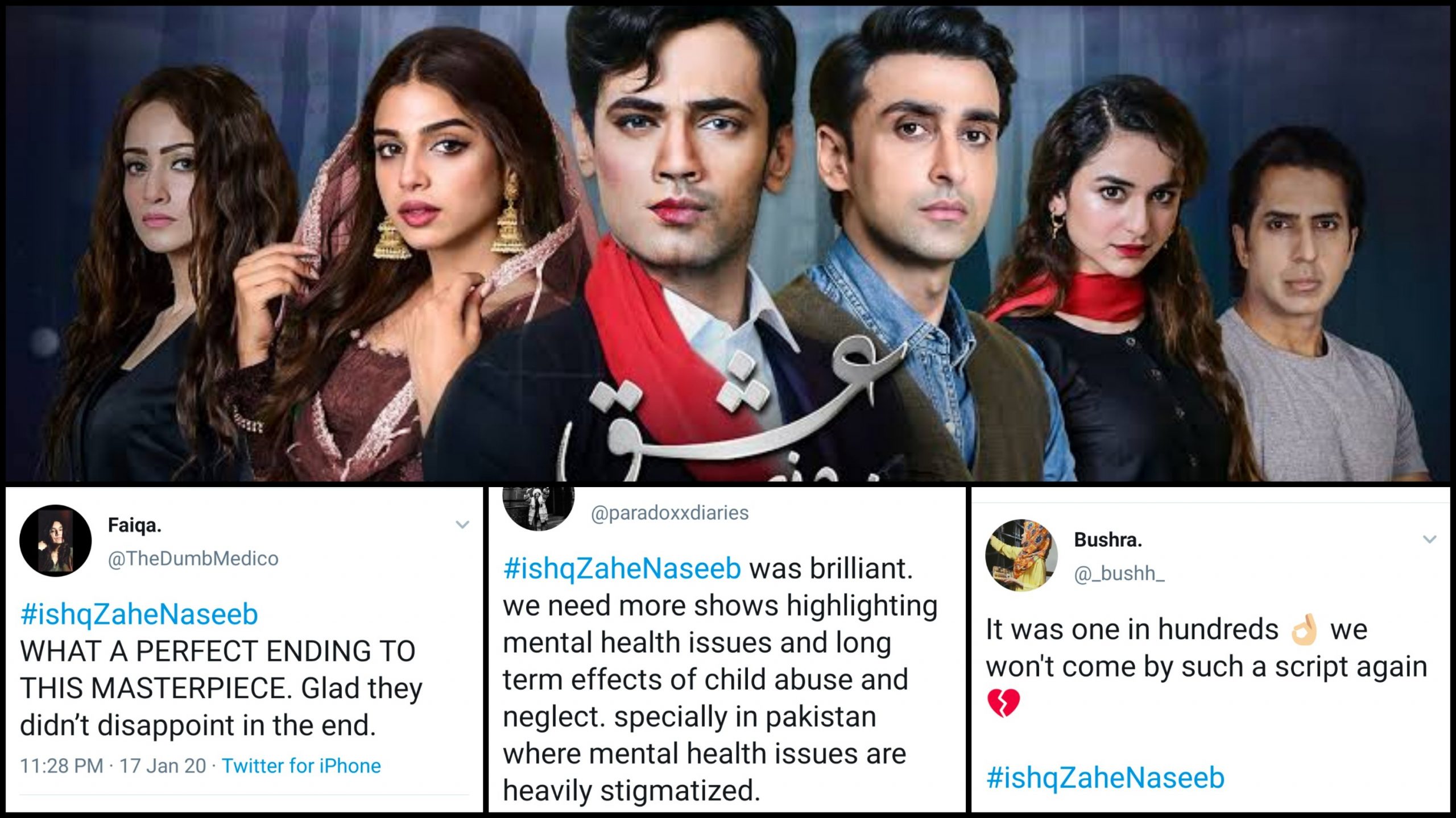 Ishq Zahe Naseeb is a drama we’ve been keeping up with since day one, and it has had us hooked onto it throughout the weeks. As the drama came to an end last night with a double episode, doubling the suspense and intensity, it did not disappoint!

The last episode was such a hit that it was the number one trend on Twitter: 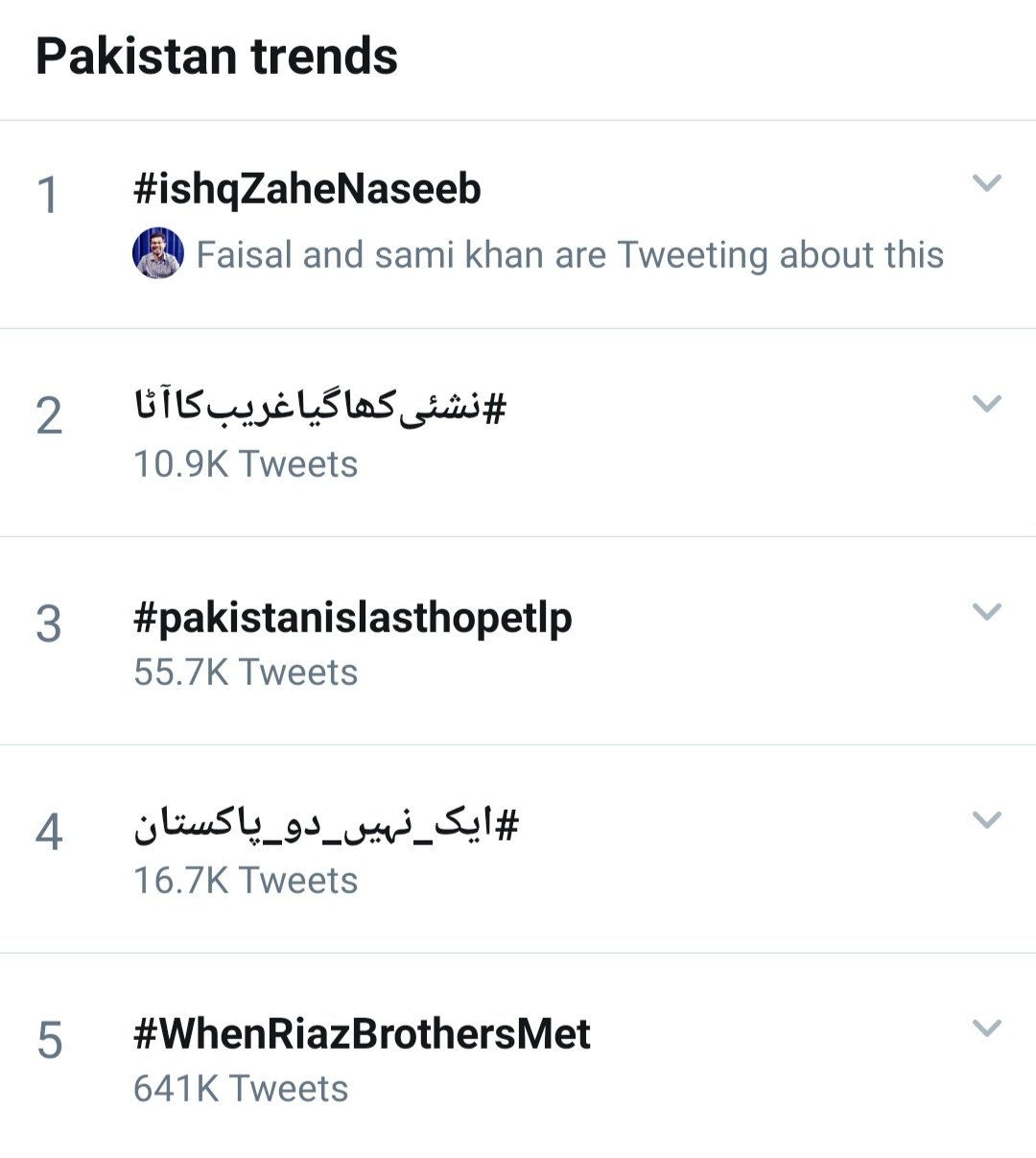 And the internet just can’t get over it!

#ishqZaheNaseeb
WHAT A PERFECT ENDING TO THIS MASTERPIECE. Glad they didn’t disappoint in the end.

People were blown away by the stellar performances:

#ishqZaheNaseeb: A masterpiece by #HashimNadeem comes to an end with a much needed message. #Mental illness needs treatment not hatred or ignorence. The psychological scars of #childhood traumatize u for life.

People found the ending to be brilliant:

Fans were more than satisfied!

#ISHQZAHENASEEB HAS ME IN A MESS RIGHT NOW ❤️😭 THIS WAS SUCH A SATISFYING SHOW AS A VIEWER!

The plot and the script were a breath of fresh air for many:

Yes a great story was written by a writer, Not like a typical love story but a reality based. All the actors have done the great acting no doubt, appreciated.
Looking forward to have more dramas like this.#ishqZaheNaseeb #HUMTV

The drama has definitely raised the bar:

So glad #ishqZaheNaseeb ended well. It was treat to watch #zahidahmed & #SonyaHussyn and other amazing cast members like #SamiKhan & specially supremely talented #YumnaZaidi. Till the very end nobody could predict wht the ending is going to be! Great job. it sets a bench mark.

Honestly all Sameer and Gohar scenes had our heart!

The last scenes of Sameer & Gohar were mesmerizing. And what a stellar performance by Zahid Ahmed. Pakistan drama industry has yet again produced a beautiful watch. Kudos to everyone involved! 💯👍🏻 #ishqzahenaseeb

In an industry full of saas bahu serials, be like #ishqZaheNaseeb

It was one in hundreds 👌🏼 we won't come by such a script again 💔#ishqZaheNaseeb pic.twitter.com/bd63C36DSk

Probably our favourite lines from the episode:

People were hoping to see Sonya and Zahid Ahmed working together in more projects:

I hope to see zahid and Sonya again together and also I hope we make more shows other than saas bahu crap. #ishqzahenaseeb

Some were moved to tears:

What an acting 😍 what an amazing scene ❤ hats off to Zahid Ahmed 💕 this episode literally brought tears in my eyes 💜#IshqZaheNaseeb pic.twitter.com/0MangWafiu

This last episode literally brought tears in my eyes 💜 the meaning of life is finding your gift, the purpose of life is to give it away 💕#ishqZaheNaseeb pic.twitter.com/6NOewcr3X1

Many agreed how this is the content that should be playing at the cinemas:

I think #ishqZaheNaseeb should be aired across cinemas instd of #merepasstumho cz the story z not that typical like those in every drama and had a strong moral lesson,made on such a strong plot n storyline and most imp an unexpected happy ending⁦.❤️

The drama also gave us an OST we won’t forget:

People were lauding HumTV for executing the show to perfection:

Finally a play on mental illness, depression and love! Loved the ending! It's possible to get over emotional pain and childhood trauma with the right approach. Well done @Humtvnetwork on ending it on a positive note! #IshqZaheNaseeb #ZahidAhmed was superb! https://t.co/WOSciriBo3

Some were sharing their favourite dialogues:

People were loving it!

So glad it ended on a positive note:

تیرا عشق ہے زہے نصیب!✨
Glad they ended it on a +ve note instead of using the infamous 'tragic ending to get views' trick; giving hope to the ones suffering from mental illness& lesson to their friends&family that with love&support they can recover.#ishqZaheNaseeb#BestOf2019 pic.twitter.com/cZByU2YVVK

Ishq Zahe Naseeb is a brave attempt at highlighting mental health issues in our society which deems them taboo. Zahid Ahmed’s brilliant performance and Farooq Rind’s craft makes it a must watch if you haven’t seen it already! How did you like the last episode? Let us know in the comments below!

12 Things We Bet You Didn’t Know about Guddu Shani