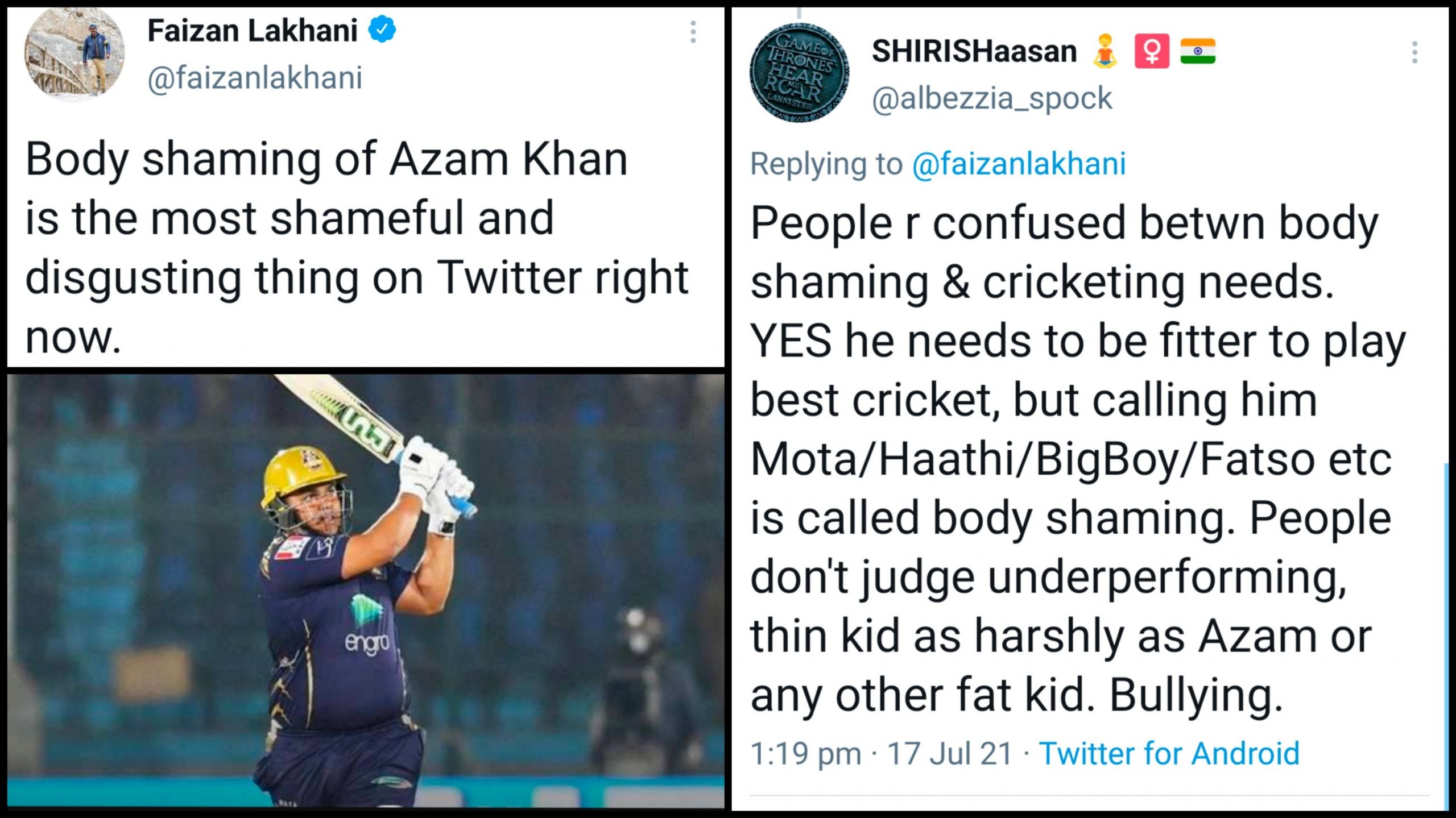 Scoring a great win against England last night Pakistani Twitter experienced way too many emotions altogether! And one of them was witnessing Azam Khan being body-shamed throughout the series:

Body shaming of Azam Khan is the most shameful and disgusting thing on Twitter right now.

And people are divided, some downright disgusted with the blatant body shaming and some sharing how they have all the right to question the fitness of the players who play for the country. Needless to say, there are a lot of opinions!

With all due respect Faizan bhai, questioning someone's fitness is not body shaming. We were told Azam Khan has been working for his fitness in order to get a spot in the team but I see no change. Goodluck to him today tho

People were sharing how his other players who spend hours in the gym would be discouraged:

Don't you think his body/fitness must be giving discouragement to many domestic players with better records..and who spend hours in gyms

People were sharing how fitness and body shaming are two different things:

Some didn’t think being overweight was a problem as long as they were performing well:

Nothing wrong in being overweight if you can perform.. pic.twitter.com/npk3f3MZtV

The sanest take we’ve read on the matter:

People were calling him unfit to be in the team:

He's unfit. It's as simple as that.
Its not about body shaming. But what he has to offer to the team. https://t.co/3mD8cbKx03

Some believed that certain standards should be met for everyone who joins the team:

No. He's a professional athlete. He should achieve the fitness standards required by players of the sport. https://t.co/XFmkwmDDRL

People were sharing how this body-shaming will probably affect his psychological health:

Bodyshaming is just like a crime it has worst psychological impacts https://t.co/7qjaPrzdSX

People were demanding that the cricketers who play internationally be wary of their fitness:

When u train for a sport u have to attain a certain physique by going to the gym and through training itself. Any school level cricket player faces some changes within a month of training so our top level players should be at peak level to play no? Plus lean physiques run faster. https://t.co/szGoxGsyti

Some believed the body shaming is a 100% justified:

He is a professional athlete who’s paid to be fit . Body shaming of athlete is 100% justified . https://t.co/s3xEaaIzmV

Some believed that it’s the performance that matters:

Till he performs
It won't matter https://t.co/7lvoi1wvMa

Some found themselves in the middle, wanting him to up his fitness game without being body-shamed for it:

lol as fans we have all the rights to question his fitness as he's been selected from millions of people so he should take care of his fitness, fat shaming is definitely wrong and we don't support that https://t.co/x6Qbowi8mU

People were questioning his selection:

How did @MAzamKhan45 even make it to the Pakistan National cricket team with that kind of fitness ? Are there any bare minimum standards at all? What example have we set for other young players who are maintaining their fitness unlike Azam? Kya wo sab bhi motay ho jayein? https://t.co/OFQJTXsA32

Making fun of his obesity is unacceptable but that doesn't mean the critcism is unacceptable. He is unfit and needs to improve a lot. https://t.co/x1WMjSYZU9

People wanted him to up his game for his own sake:

It’s not right to shame someone for their weight but if you are an athlete, you are supposed to be fit. Often times fitness can be the determining factor between two teams; be it football, tennis, or cricket – there’s no excuse for being this unfit. https://t.co/3qUsHnHzzX

Saboor Aly's Refusal To Wearing A Mask Has Netizens Divided!