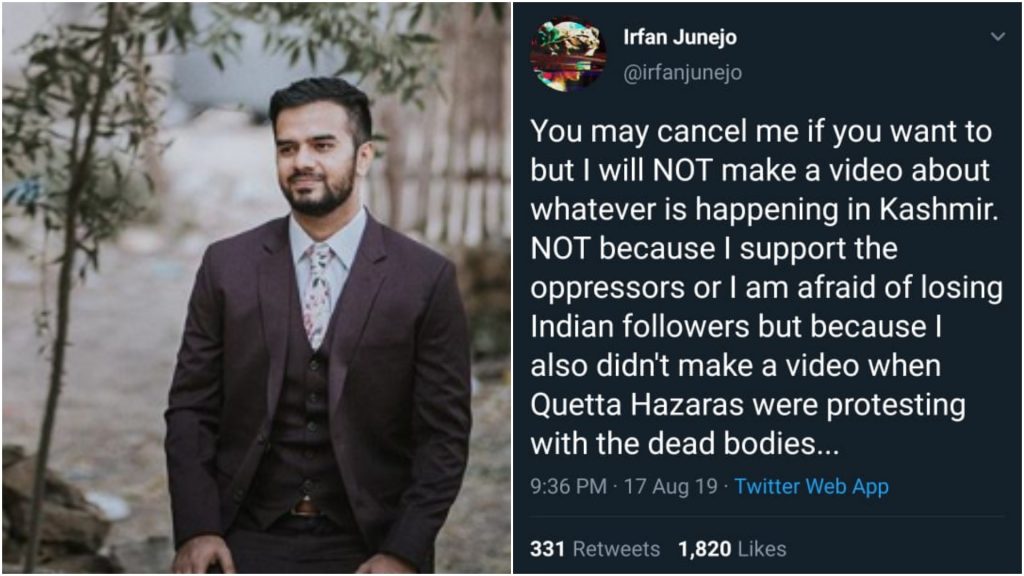 Irfan Junejo is one of the more mature and sensible of the YouTubers lot, however, his silence on Kashmir issue had majority of his fans disappointed. And when they asked him about the silence, this is the logic that he gave:

You may cancel me if you want to but I will NOT make a video about whatever is happening in Kashmir. NOT because I support the oppressors or I am afraid of losing Indian followers but because I also didn't make a video when Quetta Hazaras were protesting with the dead bodies…

BTW, I fully support what @hasanminhaj said on the topic. Ap dekh lein ja ke what he said. WHICH IS WHY I shared it on my insta story and retweeted it.

MKBHD never made a video about Trump policies, UK YouTubers didn't make videos on Brexit. If somebody is talking about this, good for them.

His 4 tweets long thread on Twitter gathered tons of criticism by his fans and within minutes, he was trending on twitter: 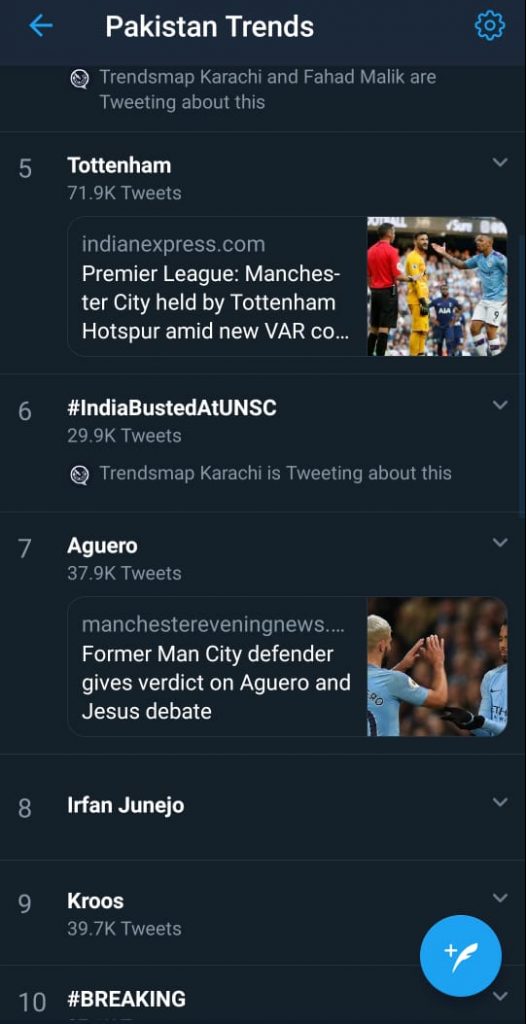 His stance did not sit well with the audience and for them he was cancelled:

Toh scenes kuch aesay hein keh Irfan Junejo can make a video on the protests happened after the release of Asia Bibi (tbh I loved that video) but he won't make a video on the Genocide happening in Kashmir just because YouTube will delete his channel.
Wot iz? https://t.co/Jl2HtFBQhb

Even Waqar Zaka made a video about his tweets:

People were disappointed in him:

I seriously expected better from Irfan Junejo. U dont want to a make a video? Dont. But stop comparing 72 to years of brutal occupation in kashmir with other issues you sick head. @irfanjunejo and yes, you are surely CANCELLED now.

My respect for Irfan Junejo has left the chat https://t.co/gFalydvtzC

It's not about the issue it is just Irfan junejo's personality. 😭😂
He's an ego-istic guy who just wanna do things on his own terms.
Which i don't know is good or bad.

Many called him out on his silence:

Irfan junejo, the one who stays neutral in the situation of oppression, he actually stands with oppressor

People were unfollowing him:

Pakistanis should unfollow Irfan Junejo on every platform so he can rest in peace with his Indian followers. The fear of losing followers by talking on Kashmir issue must be handed over to him by losing a considerable number of Pakistani followers in one day.

People thought of him as a hypocrite:

Irfan Junejo , hypocrisy will never make you acceptable to everyone .
So instead be straight forward and say it loud that you don't wanna lose your indian subscriber's and that's why raising voice for Kashmiri's isn't important for you .

Irfan Junejo is next level hypocrite. Justifying his hypocrisy with lame logic.

Irfan junejo is a different kind of hypocrite 😬😬😬

Some thought it was all about the numbers game:

i have to say, if you have a voice, better raise it. mehwish hayat did it, hasan minhaj did it, i think irfan junejo could've done it as well. if it's all because of the number's game, he'll lose the game. even if he'd lose his account, he'd get double the support for a new one.

People were having him cancelled:

IRFAN JUNEJO IS CANCELED FOR LIFE.

Many called him a darpok:

Sham Idrees made it to the memes:

Some were actually mad at him amalgamating two entirely opposite issues to justify his silence:

Never thought Irfan Junejo to talk about Kashmir until he himself tweeted about it. I can understand it’s a personal choice to take up the voices but when he did, he shouldn’t have to be this stupid to amalgamate two entirely different issues. People won’t be able to forget this!

His logic gave cancer to many:

Many thought he’d be regretting his tweets:

I don’t care what anyone else says, it makes sense what irfan junejo said

Some thought he didn’t owe anyone an explanation:

-U don’t owe anyone an explanation,
-I tweeted about the issue RTed Hasan & still received the same old BS “dartay ho tum India se”,
-No matter what you talk about, there will always be ppl who say “what about that”, whataboutery will never end,
-No solution to selective outrage

And only today, Irfan Junejo tweeted how, despite being cancelled, he’s gained a ton of followers:

What do you think about Irfan Junejo’s rant? Let us know in the comments below!

Everybody Loves Aimal - Here’s why...

Diva Jukebox: Top 10 Songs That Made It Big This Week!