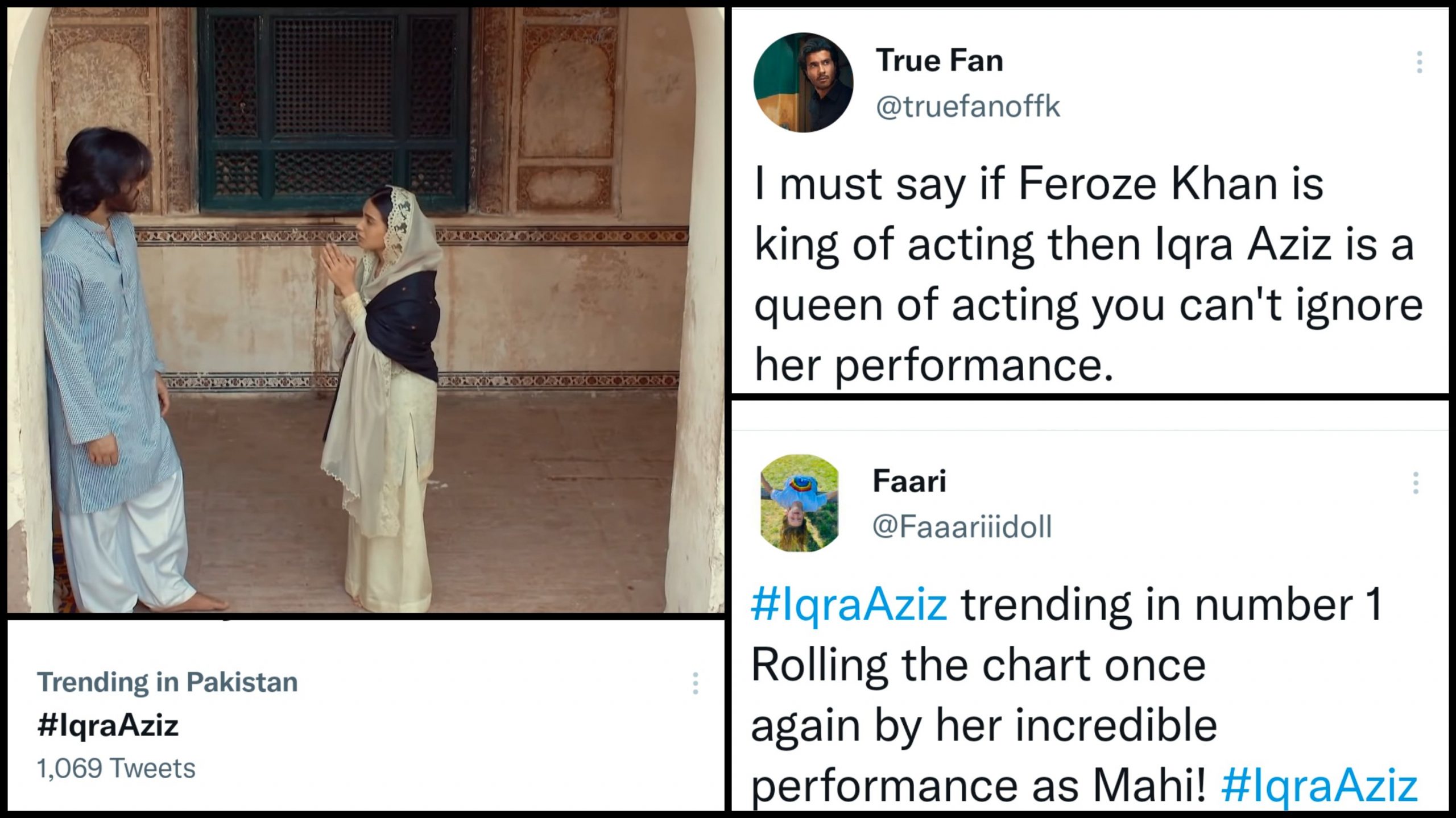 Breaking records left and right, Khuda Aur Mohabbat 3 has been an absolute favourite among fans. It has fans all over the globe and now as the story’s progressing, people are blown away by Iqra and Feroze’s exceptional acting as they trend #IqraAziz to laud her:

And here’s what they’ve got to say!

People were loving the interaction between Mahi and Farhad:

Just love this conversation between them, Now Mahi will also realize that she is in love with Farhad. But Sikandar beech me ajayega ab 😒 👀#IqraAziz #KhudaAurMohabbat3 #FerozeKhan pic.twitter.com/KXlcKKpUV8

People were blown away!

What a tremendous performance it was😭felt like every girl talking to her adhuri muhabbat♥️she is queen of our heart,deserve awards for this phenomenal acting✅#IqraAziz#KhudaAurMohabbat3 pic.twitter.com/8TjEH0D0Vz

Their eye contact with that background music OST Is incomparable to anyother OST. Just amazing connection and chemistry between Iqra and Farhad.#iqraaziz #KhudaAurMohabbat3 #FerozeKhan pic.twitter.com/8RKceWYSvW

People cried with her:

From the first drop of her Tears till the last I cried with her😭💔What A Performer👏 #IqraAziz cracking performance💯🔥 pic.twitter.com/ekFoRpHgWa

And he will always love her:

Farhad never ever wished bad for Mahi never!it was his extreme pain who came out through those words!if he could get to know it form before,how his words can effect his love,he would never say those words!never!He loved her,he loves her #KhudaAurMohabbat3 #FerozeKhan #IqraAziz pic.twitter.com/RdkPHB9IBa

Yesterday’s ep? I’m speechless. Mahi’s dialogues clearly stated that she is in love with Farhad. And the moment she said his name for the second time uffff ufff #KhudaAurMohabbat3 #IqraAziz

This scene where he started crying even more when he saw her crying breaks my heart into pieces😭💔#FerozeKhan #KhudaAurMohabbat3 #IqraAziz #FarHi pic.twitter.com/zz6lzvbraj

I must say if Feroze Khan is king of acting then Iqra Aziz is a queen of acting you can't ignore her performance.
This girl is unbelievable ❤️
she is perfectly match for the role of mahi . And now she proved by her performance.🔥#IqraAziz #Mahi#KhudaAurMohabbat3 pic.twitter.com/IORg07JYit

People were sharing what every scene made them feel like:

When she tells him she died since his death news came to her and he says kash sch hta then when he says should I die, and she says she wants him to live😭 He said she has every right on him,That literally touched my heart there😭❤ #KhudaAurMohabbat3 #FarHi #FerozeKhan #IqraAziz pic.twitter.com/Ux32ZgKb4g

Agreed, two of the finest actors at their finest!

#FerozeKhan and #iqraaziz are at their craziest best, like I’ve seen numerous Urdu dramas but the way these two perform, I’ve never seen anyone even mildly exhibiting that level of grace and beauty onscreen. Pakistan is so lucky to have such gem of actors.#KhudaAurMohabbat3

By each passing episode i am getting why #KhudaAurMohabbat3 is a game changer. It's just getting more n more intense.

Are you keeping up with Khuda Aur Mohabbat 3? Let us know in the comments below!

Is Lahore Really Safe For Women? Netizens Question After Another Assault Video Emerges From Lahore