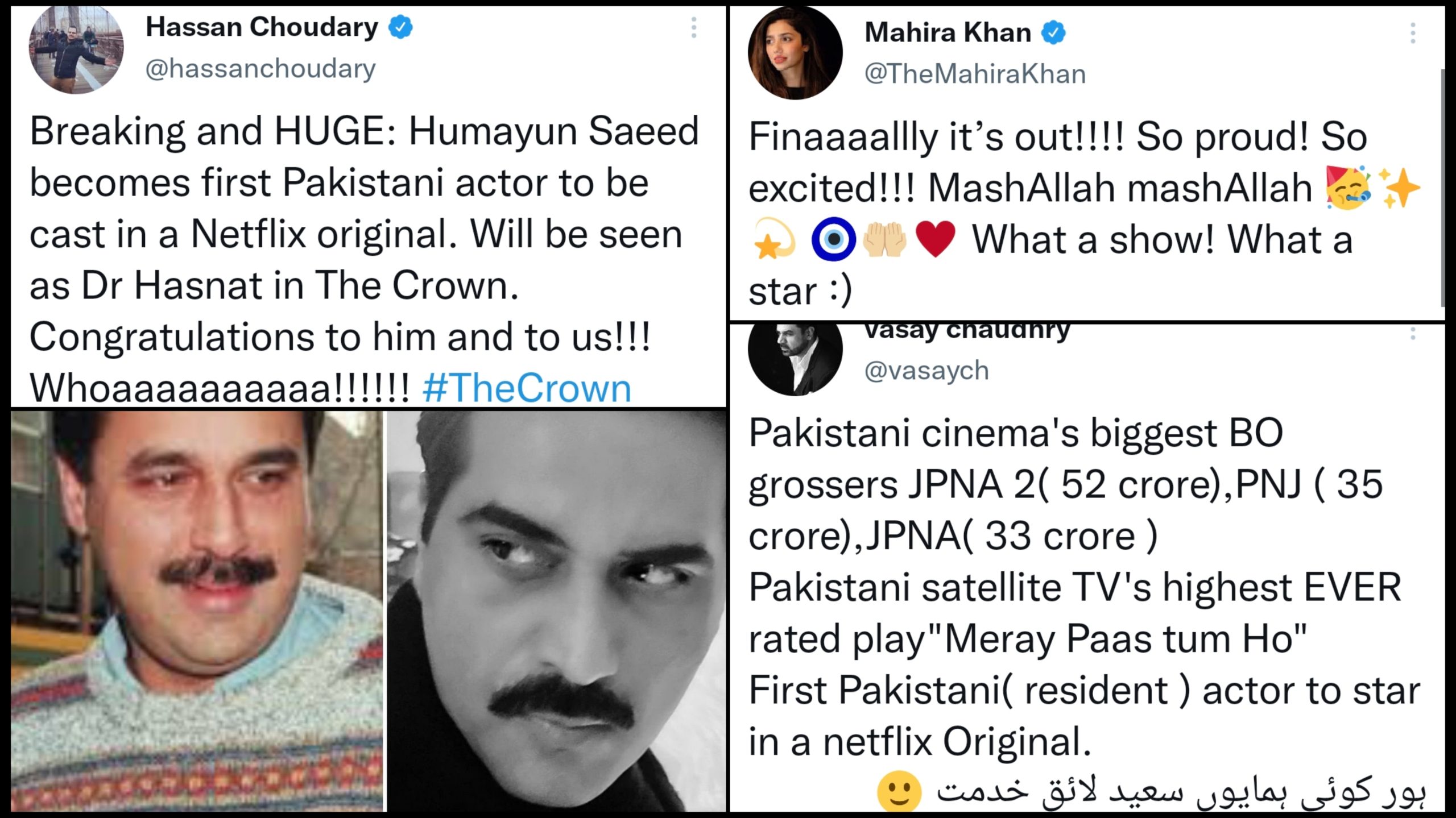 After much speculation, it’s been confirmed that Humayun Saeed will be playing the role of Princess Diana’s companion Dr. Hasnat Khan in one of the most coveted series on Netflix, the Crown.

People were speculating that the role would be given to Fawad Khan, but as various sources have now confirmed, it is Humayun Saeed who has become the first Pakistani actor to feature in a Netflix Original series:

Breaking and HUGE: Humayun Saeed becomes first Pakistani actor to be cast in a Netflix original. Will be seen as Dr Hasnat in The Crown. Congratulations to him and to us!!! Whoaaaaaaaaaa!!!!!! #TheCrown @TheCrownNetflix @iamhumayunsaeed @netflix pic.twitter.com/lUZZvDsyjC

And as the news made it to the public, they’ve got lots to say!

I'm incredibly happy that they used a Pakistani actor to portray a Pakistani character, rather than lazily choosing Indians all the time. https://t.co/bzgppWOq8G

Mahira Khan too was excited and proud at the feat:

Finaaaallly it’s out!!!! So proud! So excited!!! MashAllah mashAllah 🥳✨💫 🧿🤲🏼♥️ What a show! What a star 🙂 @iamhumayunsaeed @TheCrownNetflix

Vasay Chaudhry hyped his friend up like no other:

People found the feat to be heartwarming:

I just can't wait to see @iamhumayunsaeed as Dr. Hasnat in The Crown!! This is surely a proud moment for us. #HumayunSaeedTheCrownhttps://t.co/h1urDXBhf2

Oh My God; is it really true?
Well, it is a wonderful piece of information for all of us😍
With The Crown, Humayun Saeed makes his Netflix debut. @iamhumayunsaeed you are unquestionably a source of pride for Pakistan 😍
#HumayunSaeedTheCrown https://t.co/XoMJrkdkc4 pic.twitter.com/0KUjVatk0Q

Tbh humayun saeed deserves this. He has done so much work for Pakistan media industry. It's time to shine on netflix!#HumayunSaeedTheCrown https://t.co/03R41VOAdw

People were excited for the new season:

#TheCrown is undoubtedly one of the best productions of Netflix. This is a great decision by them. Can't wait for the 5th season. 👏🏼 https://t.co/MuwxRK4EEP

AMAZING!! So proud of Humayun and Fawad! Thrown out from the neighbouring country but flying internationally now. https://t.co/XVmZBrdQDQ

Yay 👏. Humayun Saeed is the best choice for this among all other Pakistani actors. Now I have to watch #TheCrown just for Humayun Saeed. 🤍 https://t.co/Gj4YLmpHex

This is massive news. Congratulations to @iamhumayunsaeed for this big achievement of playing the role of Dr Hasnat in the Netflix original The Crown. Very happy for him and this will bring more opportunities for Pakistani actors. https://t.co/eZya87U91F

And while others were celebrating, some had their reservations:

why not fawad khan or osman khalid butt 😭 https://t.co/SIDrHT8raQ

What do you think about the casting? Let us know in the comments below!

Telefilm Ruposh Wins Over The Audience & They've Got Lots To Say!