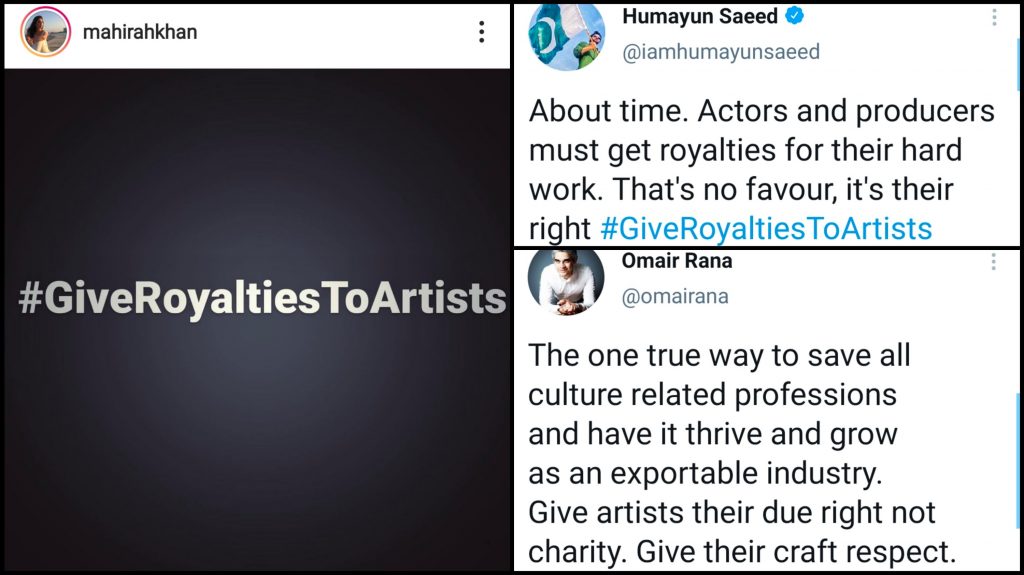 A few weeks back a heart breaking video of the ailing veteran actress Naila Jaffery made waves on social media, giving rise to the hashtag #GiveRoyaltiesToArtists. And while most celebrities chose to remain silent on the matter, they’ve now united as a whole and are demanding that all artists be given the royalties for their work.

On Sunday evening, Pakistani celebrities, actors, writers, producers and the teams turned to social media platforms: Instagram and Twitter, and their unity is applaudable!

Humayun Saeed too shared how it was about time everyone got paid their royalties:

About time. Actors and producers must get royalties for their hard work. That's no favour, it's their right #GiveRoyaltiesToArtists pic.twitter.com/2hJZruLzCf

They were demanding for their legal rights and nor charity for when they’re sick:

The one true way to save all culture related professions and have it thrive and grow as an exportable industry. Give artists their due right not charity. Give their craft respect. #GiveRoyaltiesToArtists pic.twitter.com/lkyULxiKIq

In tough times, solidarity is the force. We stand together, hand in hand. #giveroyaltiestoartists pic.twitter.com/BWyuOGFOVQ

And while everyone was posting the hashtag, Armeena took the time to educate the general public on what royalties for artists mean:

I think a lot of people don’t understand what royalties in business actually mean so here it is for those who are abusing artists online. 🤗 #GiveRoyaltiesToArtists pic.twitter.com/qrz0dYbZ7A

When your work is doing reruns around the world and online, raking in revenues for networks(channels) while you're having to worry about next month's rent, next week's grocery or a loved one's medical bill you know you've been forced into an unjust bargain. pic.twitter.com/qGJmJQt3EK

Sanam Saeed thought it was time to play fair!

Syed Jibran wanted the stolen right to be given back!

Its about time that people from all departments of creative arts and media should be given the royalties for their work which they deserve. It is our absolute right which uptill now has been STOLEN from us. #GiveRoyaltiesToArtists

Film maker Furqan was proud to have started the trend by posting Naila’s video:

This video of our colleague & friend Naila Jafri has united our fraternity members to demand #GiveRoyaltiesToArtists which she had demanded as a right not only to actors but directors and producers as well. Unfortunately Producers dont get even their basic amount back on time https://t.co/r9eUyeYqIX pic.twitter.com/LWhmqSZ9gE

Royalties is a right of all artists, writers, producers and directors. Internationally it’s happening why can’t we implement it in Pakistan #giveroyaltiestoartists pic.twitter.com/cisPilliRO

And while the celebrities were fighting for their rights, they found the netizens by their side:

Hoping Pakistani artists get their royalties.Every artist around the world get royalties from their shows, movies and songs,even when shows n movies are rerun they still get royalties.Only in Pakistan artists don't get their due so its about time they do!! #GiveRoyaltiesToArtists

Your devotion to your craft should not have to cost you your health, your future and a shot at earning a respectable livelihood. Speaking up for a basic right shouldn't jeapordise a career. #GiveRoyaltiesToArtists

#GiveRoyaltiesToArtists before they succumb to illness or financial strain. Recognize you Film fraternity as an Industry. https://t.co/9V9plxMeNp

Muna Shamsuddin - The New Face of British Diplomacy in Pakistan