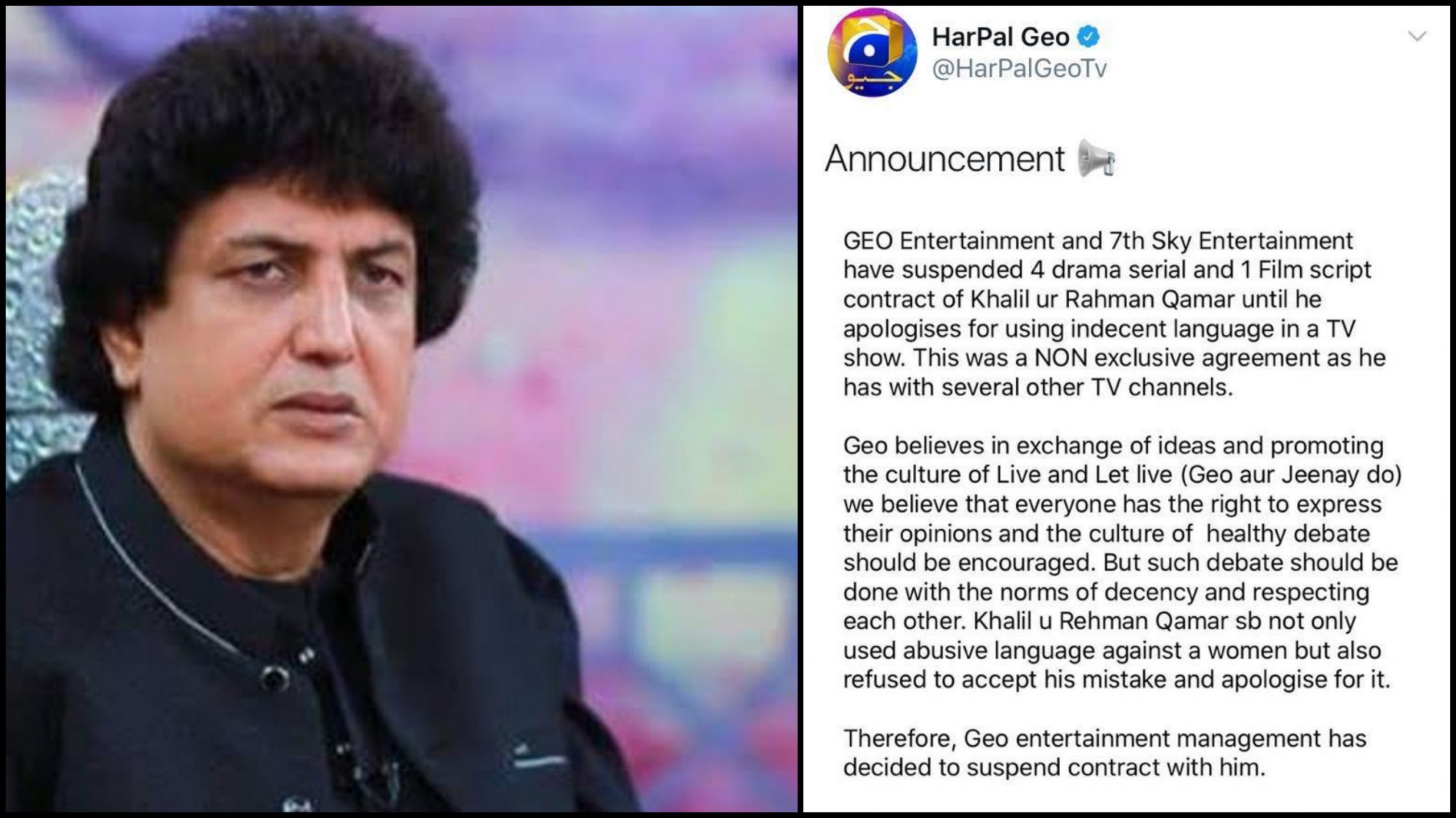 After being a top trend on the internet for a few days now and winning the hearts of thousands of misogynists on the internet, Khalil ur Rehman Qamar is finally being held accountable for misbehaving on national television and admitting to having zero guilt and regret! GEO and 7th Sky Entertainment announced that they’re ending their contract with Khalil ur Rehman Qamar until he apologizes for his poor behaviour:

And the internet was all praise for taking a step in the right direction:

#GeoTV has suspended #khalilurrehmanqamar's film and drama contracts unless and until he apologises for his behaviour.

We need to hold misogynists accountable for their behaviour!!! https://t.co/FyB6iih2nL

Mahira Khan too was all for it:

Sarmad Khoosat praised them for setting the right precedence:

Someone, at least SOMEONE had the courage! Thank you Geo for setting the right precedence. https://t.co/0E33qlcDwi

Nadia Hussain was rooting for GEO!

This is why we march:

You know what they said about movements like Aurat March raising the cost of being a misogynist?

This is how it will turn out. There will many more assholes like this writer who will face actual consequences for their misogyny. https://t.co/j8wfo2AFAN

WoW. Apparently Pakistan can change 😃 got some respect for Geo now! https://t.co/EbtrEoG98p

Many agreed how this was necessary:

This step was necessary. Every TV channel needs to cancel their contact with a misogynist like him. https://t.co/LXnlrgsCqU

People were waiting for other major channels to catch up:

Geo Entertainment deserves accolades for cancelling the contract with Khalil-ur-Rehman Qamar. No one is bigger than our values of free speech, healthy debate and tolerance for each other. #GeoAurJeenayDo #MeraJismMeriMarzi https://t.co/CsjDEIA8S6

People were standing tall and proud at the impact that it had:

The march hasn't even happened yet & we are already seeing its impact. This is y all the misogynistic people r losing their shit. They know the march is a direct challenge to the patriarchy & the power structures that benefit them.
More power to the amazing women organising this! https://t.co/NAKEhsb9ry

Women were congratulating each other on the victory:

To all the women (and allies!) who spoke up: this is YOUR victory. You held Geo accountable for platforming Khalil ur Rehman’s disgusting views, & dealt with a torrent of abuse that showed the fragility of the male ego like nothing else could. Thank you! #MeraJismMeriMarzi 🇵🇰✊🏽 https://t.co/Mf13VzWKuS

Many were adamant on Khalil ur Rehman Qamar apologising:

Well done Geo! All KuQ needs to do is apologise. Which he must! https://t.co/aTnKMaIhxW

People were calling it the downfall of KRQ:

It was bound to happen. When success gets to your head, your downfall isn’t far… bye bye KRQ’s days of glory!!! https://t.co/XbJi0vzziw

Even people who didn’t like GEO to begin with were singing high praise:

Although @geonews_english is one trash organisation itself, they’ve for once made a sensible decision. Which should be implemented on anyone whether male or female, who doesn’t abide by basic mannerisms on national tv or behind the scenes. https://t.co/5IQxRhKyYB

People were calling it an exemplary stance:

Exemplary stance. All other channels/media houses should follow suit! https://t.co/oZozMMUdnz

This is an excellent decision, although I’m pretty sure KRQ would rather never write a word of his odious dramas than apologise. https://t.co/5amsjIJ9IJ

wasn't expecting this. I'm pleasantly surprised. Now ffs stop inviting him on shows to hear his side @_Mansoor_Ali #khalilurrehmanqamar 🤮 https://t.co/S5DEI1sFFm

Some were still in disbelief!

Social media outrage against misogynist is useless. Yes sure https://t.co/WDyHieSqta

What do you think about GEO and 7th Sky Entertainment cancelling KRQ’s contract? Let us know in the comments below!

#IamSatrangi: Bonanza Satrangi celebrates women from different walks of life who will inspire you to chase your dreams!