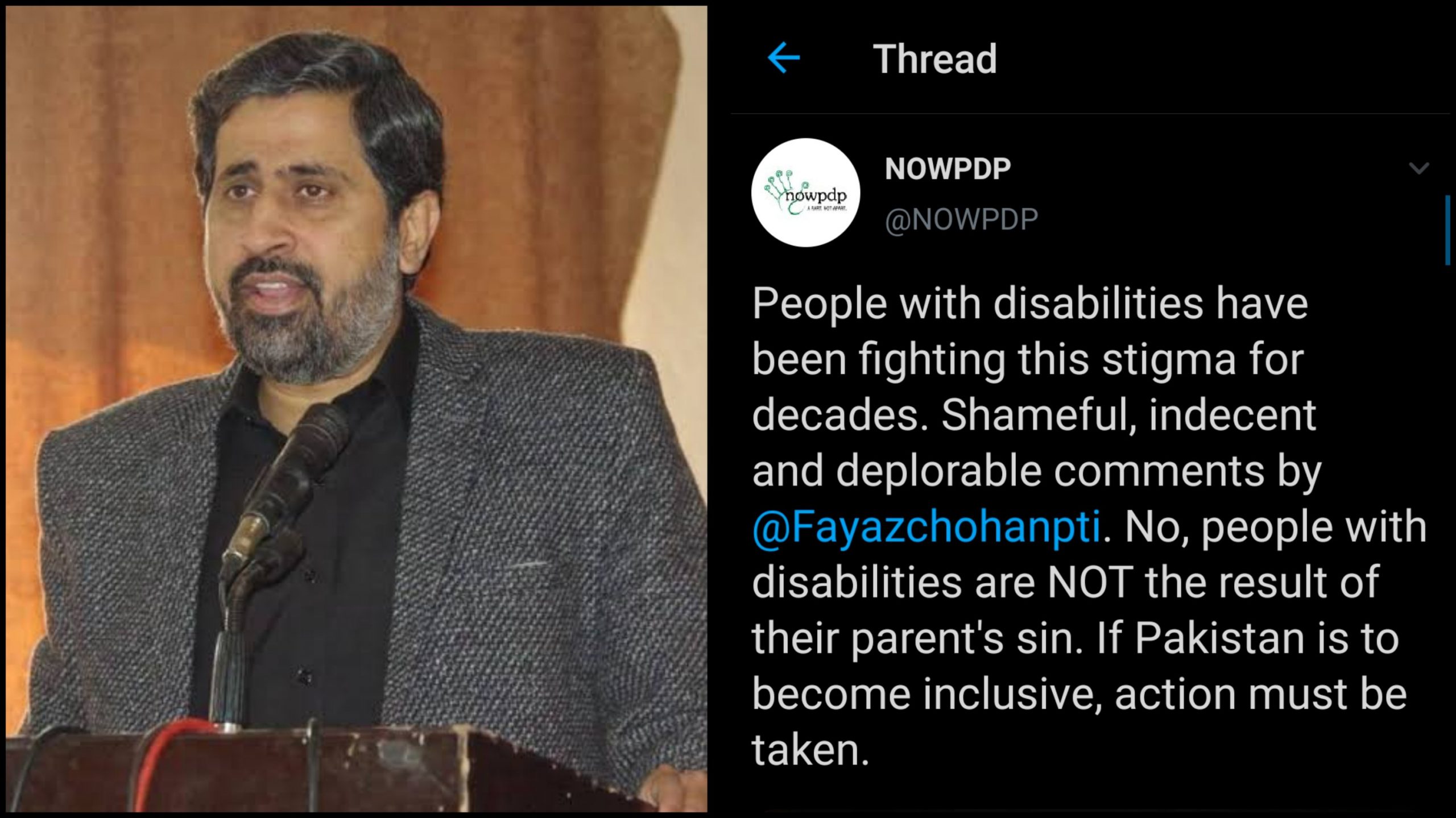 In trying times like these, people are confused, scared and stressed to say the least. In a press conference regarding a briefing on the Coronavirus pandemic, Fayyaz ul Hassan Chohan really crossed the line after he called people with disabilities Allah’s azaab on the parents for their wrongdoings.

And people were baffled at his insensitive comments!

Fayyaz Chohan sinking to new depths. During press con about coronavirus, he described having children with disabilities as a punishment from God. What a vile, disgusting thing to say! Worth remembering that this man, who consistently spews venom, was reappointed as Info Min by IK pic.twitter.com/NCCsd1OA4V

People were praying to cure his insensitivity:

On behalf of our adopted child who has cerebral palsy & millions who can’t respond to you.

I pray for cure of ur insensitivity. I pray u respect families who take care of these angels.

Watch this video, maybe it will melt ur heart, if you have any. pic.twitter.com/ofLqnXKmsh

Is this for real? I’m appalled & disgusted! @ImranKhanPTI Sir, I hope you watch this & ask your team to have some empathy, wisdom, decency and grace! This is Shameful!
PS: I am a person who’s differently abled & my mother takes pride in what I’ve done for my country so far! https://t.co/uGrQWDgap6

Some wanted him to stop worrying about the disabled children:

Special children are just fine. Fayaz Chohan stop worrying about them. Allah has his own ways of creations and goofs like you can't understand that.

Many were sharing how the specially abled people in their lives helped them raise awareness for others:

PM ⁦@ImranKhanPTI⁩ must take notice of this insensitive remark made by Chohan. My brother was a special child and because of him my parents established the 1st school in Pakistan for the Down’s Syndrome that created awareness for 000s of such schools https://t.co/AAwLXFSV2R

Many were calling him out on his sick mentality:

Calling physically challenged children an act of divine justice for sins of parents is deplorable and shameful but unfortunately routine stuff for punjab info min Fiaz ul hassan chohan, who habitually puts his foot in his mouth.why is he a minister I always wonder. Sic!

Repeat after us: physical disability is not a curse!

For Fayyaz Chohan – Physical disability is not a curse but normal person with gutter mentality is!! Rest, Allah is the absolute judge of anyone’s good/bad deeds and disable children are not Allah ka azaab to them.

Also, man is bad mouthed and insensitive, shouldn’t be tolerated.

The Human Rights Comission of Pakistan expressed their shock at the comments:

HRCP is deeply concerned by the statement made by the Punjab Information Minister @FayyazulHChohan, who has suggested that children with physical or mental disabilities are born as a result of their parents' sins. This was irresponsible and callous.

People were adamant that he resigns:

On behalf of all families with special abled children, F. Chohan must be forced to #resign. @PTIofficial
My brother,w/ cerebral palsy, millions like him in my country, love & pride of our families, have more worth in their little fingers than ignorant, reckless men like Chohan. https://t.co/SQ8xwot3aC

Shireen Mazari too shared how his statement was unforgivable:

Special children are not an "azaab" but are special human beings to be cared for and loved and allowed to develop their own potential. In fact no child can ever be an "azaab" and for anyone to make such a cruel, inhumane statement is absolutely unforgivable and condemnable.

I’m so disappointed that Fayyaz Chohan is part of the PTI government. His shameful comments show his jahil mentality. https://t.co/svGxNgroVC

People wanted him to be sacked, and that too asap!

Absolutely disgusting views on disability by Fayyaz Chohan. Remind me why has he been given the ministerial duties again? Somebody plz sack him for good. Despicable!!@ImranKhanPTI U can do better than this Sir

Another day, another verbal ill by Fayyaz Chohan!

He was caught getting his son’s exam marks increased using his position,
but he has the audacity to malign others’ precious children who are differently-abled! pic.twitter.com/olJ6RKxMIY

Special children are a gift rom Allah, they aren’t the result of any wrong doings by the parents,these special children are valued by those who are valuable.Allah has clearly said in Quran that there will be no catastrophe on his beloved Prophet ﷺ ummah only tests of our faith. pic.twitter.com/2ZcztVz7ms

This mindset needs to change!

People with disabilities are among the most marginalized sections of our population, and apathy that comes with mindsets like these is what enables this marginalization. There should be no place for it in society, let alone the state. https://t.co/FN9KOwosyS

This is pathetic. the fact that these “leaders” can get away with saying such vile things and are not held accountable is ridiculous. https://t.co/aFXKhBClLx

They are PEOPLE and that’s all they should be labelled as:

NO! @Fayazchohanpti this is exactly what we've been fighting against! People With Disabilities are PEOPLE! PERIOD! They are not a punishment! https://t.co/8QuXRKFRge

Some thought he had lost his senses:

ASTAGHFIRULLAH! Is he even in his senses?! https://t.co/PRoebK7J8P

Cannot even begin to express how hateful and insensitive this is. 😡 https://t.co/Ir6mryM6kN

Some had legit questions:

Who are we to judge that birth of a special child is the result of bad deeds of his/her parents? https://t.co/4TbKVysVxp

Fayyaz Chohan can't be fixed. It is that simple.

And while Fayyaz ul Hassan Chohan issued an apology later, sentiments were hurt beyond measure:

PSL got postponed due to the corona outbreak and people are happy and sad at the same time!

Saba Qamar had a 'Ask Saba' session on Twitter & here are our favourite answers from it!