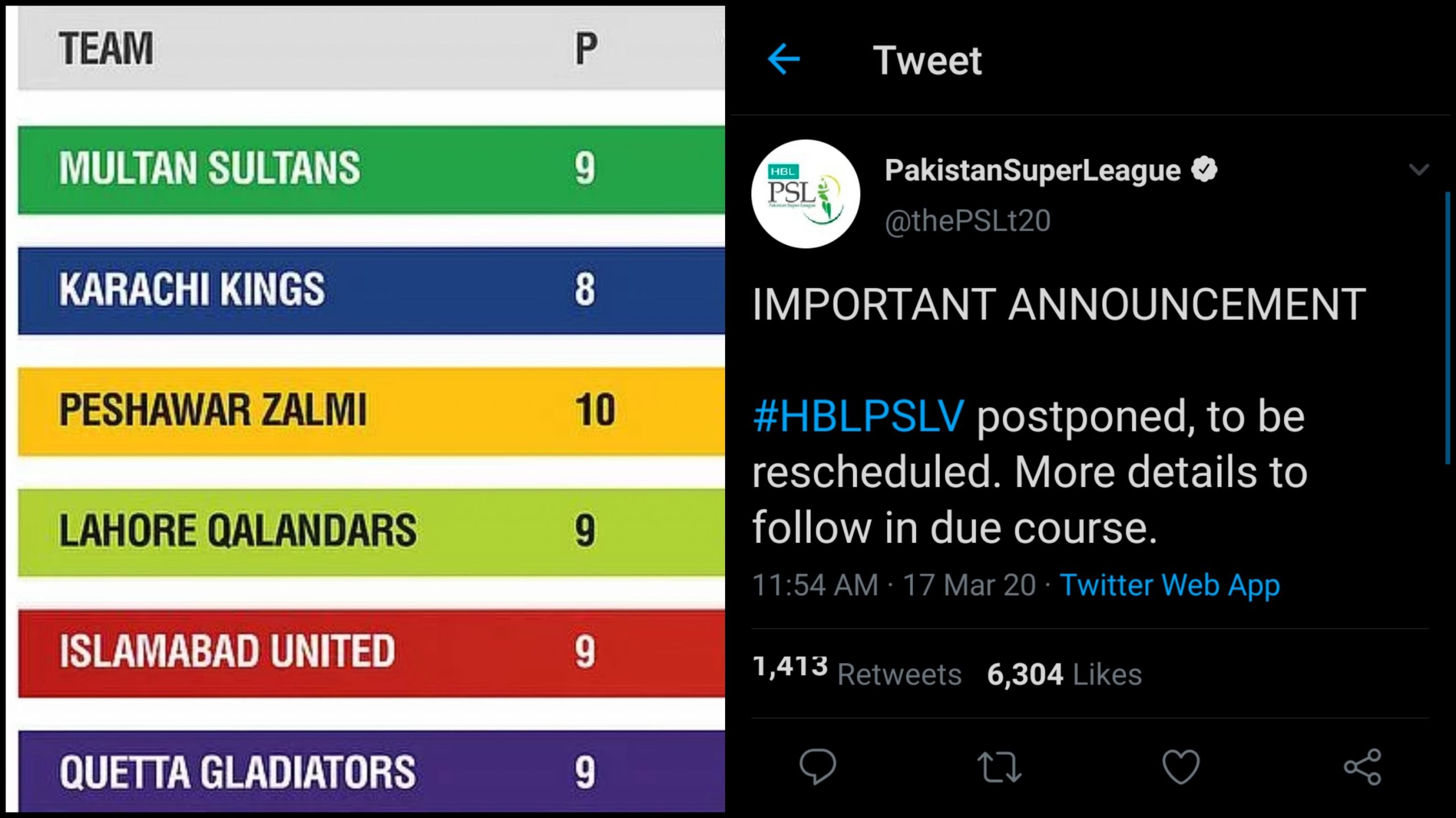 PSL playoffs have been postponed amidst coronavirus fears – the semi-finals, which were set to be played on Tuesday, and the final, slotted for Wednesday, will be rescheduled after thorough assessment of the corona situation in the country:

IMPORTANT ANNOUNCEMENT#HBLPSLV postponed, to be rescheduled. More details to follow in due course.

And the internet is actually pleased with the decision taken by PCB:

Sensible decision. Cricket is nothing without fans and players safety comes first.@thePSLt20#PSLV2020 #PSLV5

Shahid Afridi took to Twitter to ask if the table topper should be handed the trophy:

Sad to see the PSL end, but health and safety of all concerned is the key, esp those who are travelling back to their homes.Perhaps the decision could have been taken earlier, with regards to the trophy…well the table-topper should be handed the trophy? 😊 @MultanSultans

PSL called off, difficult & frustrating decision but the right one, health & safety before everything.

People were sad for Lahore though:

When Lahore Qalandars finally made into semis for the first time ever, PSL called off 😭 On a serious note, very good step at this crucial moment. #PSLV2020

The teams have been asked to get tested and practice self-isolation:

All #PSLV2020 players, team management, PCB officials and broadcasters to undergo #COVID2019 tests. Ramiz Raja says that Alex Hales, representing Karachi Kings, had symptoms of #coronavirusinpakistan after which he went back to England and has put himself in self-isolation.

Many were of the opinion that this decision should have been taken earlier:

Finally they have taken the correct decision, although they should have postponed it before.

Many think that sanity has finally prevailed!

PSL Called Off. May we continue the matches when situation get better and decide the champion post August 2020.

People were thanking all the cities for the full house stadiums!

Right decision to call-off the Pakistan Super League. This should have been done earlier rather than continuing the tournament with weakened teams and in front of empty stadiums #PSLV

Some were blaming it on the nazar:

#PSLV2020 has been Called Off
it will be rescheduled
Mere Maidaano Ko Nazar Lag Gai 😭😭#PSLV2020 pic.twitter.com/OEA0DRnNmj

#PSLV2020 postponed due to coronavirus

Some were straight up wanting the cup to go to Multan Sultans:

Multan Sultans should be given the Cup coz they are at the top of the Table and they surely deserve it the most. It's no point postponing it as the craze of PSL will end due to the gap!#PSLV2020#PSL5

Psl called off due to Corona virus

Safety comes first. Its great that PCB postponed the PSL for now. pic.twitter.com/hkEh5B0Unw

Psl called off due to Corona virus

Many were suggesting ways to survive without PSL:

What are your thoughts about the PSL being postponed? Let us know in the comments below!

10 Pakistani Films You Can Binge While You're At Home!