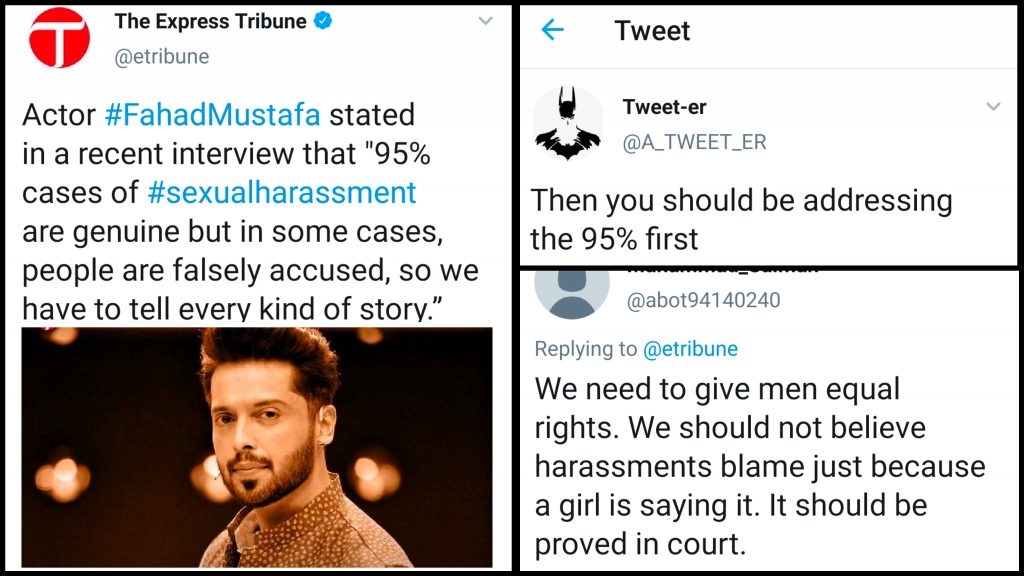 Coming from a society where women face slack for reporting harassment, Fahad Mustafa’s new drama series #Dunk has raised a lot of questions.

With the plot portraying the other end of the story i.e cases of false accusations, people have been criticising the drama for undermining and dismissing the bigger percentage of cases where the harassment claims actually stand true.

To address these concerns, Fahad Mustafa took to a recent interview where he shared that people should be shown ‘all kinds of stories:’

Actor #FahadMustafa stated in a recent interview that "95% cases of #sexualharassment are genuine but in some cases, people are falsely accused, so we have to tell every kind of story.” #Dunkdrama https://t.co/13wHPQTdIF pic.twitter.com/QVFoIKM39P

His comments resonated with a few people:

We need to give men equal rights. We should not believe harassments blame just because a girl is saying it. It should be proved in court.

People were calling it a need of the hour:

People wanted all sides to be shown:

I think we also need to give him some space. Since he realises that 95% cases are genuine. Not everything is black & white. Let them express the minority side too. This is Pakistan, you can't rule out the possibility of false accusations. Thank You! 🙏🏼🙏🏼 https://t.co/W2HeWTCUd7

While he did have a few people agree with him, a vast majority of people found his take to be straight up tone deaf:

95% cases are genuine but we'd make them doubtful by glorifying other 5% cases that too in a highly misogynist society! Apologists like Fahad Mustafa actively contribute to the perpetuating harassment cases https://t.co/ZRzQwrIHdx

Is this the white lives matter for creepy men? https://t.co/631YVTzQjg

People found his stance to be poor:

The fact that he CHOSE to tell that 'kind' of story is very telling indeed.

At a time where we need more stories about the genuine cases and how the culprits need to be prosecuted, this is just very poor! https://t.co/hWV0T2MIA1

People found his comments siding with the harassers:

wE hAve tO tELl eVeRy kInD oF sToRy
2 dramas on air rn with false accusation cases, numerous others have been made over the years.
pyar kay sadqay talked about the harassment done by a disgusting father in law and was banned by pemra??
WHICH % NEEDS BETTER REP DUMBASS???? https://t.co/gLrhF5nhV7

Unfortunate to see figures in the media use their platforms to contort real issues that exist for women across Pakistan. Reinforcing the mentality that we should be sceptical of survivors and assassinate their characters – “just in case it’s the 5%” https://t.co/chuA773h3s

But are we done telling the stories of the 95% first? Not quite. https://t.co/ocP9YOgflP

People were calling it a publicity tactic:

If 95% of the cases are genuine and out of which almost all of them are dismissed and the victim vilified for coming out shouldn't your drama be other way around? 🤔
ye controversial chooran sirf publicity ke liye baicha ja raha hai https://t.co/5mVuDqBWvR

Then you should be addressing the 95% first https://t.co/fpWNvLS3oE

People were calling him an apologist!

Just simply say you're an apologist and leave. Causing nothing but harm for us women. https://t.co/jcYgs0l2Bd

More like 99.99% are genuine.
Also wtf, if we start telling "every side" are we going to have a drama about a rapist justifying what he did and telling his side…. Oh wait 🤔 https://t.co/BtDrtXJZ5A

5% cases of sexual harassment are not genuine according to the actor. Five percent. So he is making a drama to brush off the remaining 95% cases that the society already doesn't consider real. :)) https://t.co/fmkmyt2W3h

People just couldn’t wrap their head around his logic:

What do you think about Fahad Mustafa’s stance? Let us know in the comments below!

Diva 2020 Round-Up: Restaurants That Satisfied Our Cravings This Year in Karachi!