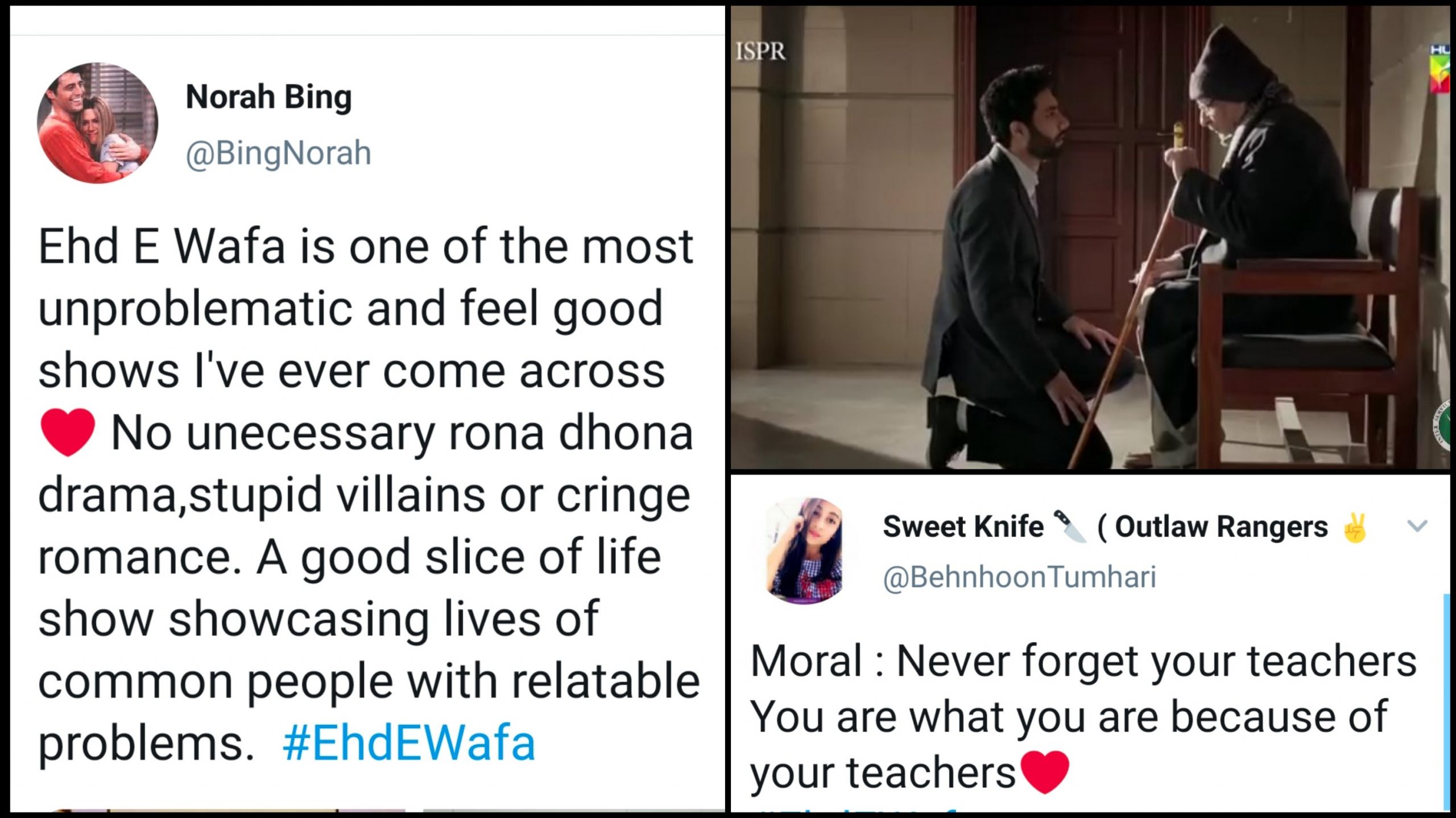 Last night proved to be one of the best episodes of Ehd-e-Wafa which left the audience feeling very emotional, including us!

With Saad and Shahzain reuniting and Malik Firdous’ unfortunate situation, everyone thoroughly loved the episode:

Epi#21
Emotional scenes, Use of power, fight against mafia, perfect love strory, reunion of old friends.
A dominant performance by shehryar nd shariq.
This epi is far better than previous ones in term of startung nd ending.
Incredible.#EhdEWafa

Ehd E Wafa is one of the most unproblematic and feel good shows I've ever come across❤ No unecessary rona dhona drama,stupid villains or cringe romance. A good slice of life show showcasing lives of common people with relatable problems. #EhdEWafa pic.twitter.com/jY8VajaQxh

The ending we stan:

Idk how exactly #EhdEWafa will end. Ending might be sad. But I'd love to see it end with the SSG reuniting in Lawrence college and reliving memories at the place where it all started; the place that made them who they are today and where they formed friendships for a lifetime.❤

Two mothers both have offered their sons to serve the homeland

"Behind every successful man there is a woman and that woman is mother❤️"#EhdEWafa#Ehd_e_wafa pic.twitter.com/ntetNEYzlR

Moral : Never forget your teachers You are what you are because of your teachers❤️#EhdEWafa pic.twitter.com/LyU8PBe0dJ

The reunion we’ve been waiting for:

Idk man, but this really was one of the most beautiful scenes from the episode. Saad and Shahzain finallyy! ❤#EhdeWafa pic.twitter.com/CjsONqJhUv

Our favourite duo too!

Such genuine scenes melt my heart. These two will always remain my favourites. ❤#EhdeWafa pic.twitter.com/ytjCDukQTP

Fans were sharing their favourite scenes from the episode:

So this episode was quite good. 💝
Some of the best scenes are ❤️💖#Ehd_e_wafa #EhdEWafa pic.twitter.com/yYBGP79Y3W

Real couple goals, exactly how they should be:

Saad and Dua are not just couple goals but also an inspiration to many youngsters who often neglect their careers or academics for love. These two proved how both can be balanced perfectly.❤ True love is letting each other grow💖 #EhdEWafa pic.twitter.com/ELcNKf8tVE

People were sharing their favourite dialogues from the drama:

episode 21 belongs to Shariyar n @AhmedAliAkbar is one of those finest actors hu give their best to every single character thy belongs to. His expressions his dialogues as Shariyar stole the show #EhdEWafa pic.twitter.com/PyBr5wuBKe

People were lauding ISPR for exposing the corrupt system:

People were living for the SSG reunion:

Everything you are today, you owe it to your teachers:

Not gonna lie, this had us tearing up too!

Something everyone can learn from:

Shariq and Shehryar saving the day:

Haha, don’t think we’ll ever get enough of Rani:

That moment when Raani scolded her brother in law & his counter reply(mai he to chat pr ap donu ki mulaqat krwata hota tha) was one of the best parts of yesterday's episode, Raani always rocks 😂😍 @zaranoorabbasi #EhdEWafa

Shehryar for the win 🏆

Shehryar is a great example of
Status doesn't matter Values do ❤❤
Be Like Shehryar #EhdeWafa pic.twitter.com/nbR6YAU4hX

Us too, can’t wait for the next episode:

I can watch this promo like a thousands time🥺❤️#ehdewafa pic.twitter.com/HPX0RzGWOB

From today's episode of serial ehd e wafa I am able to conclude that the four major pillars of Pakistan (1) army(2)politicians(3)beaurocrates(4)media are interconnected . If they work together Pakistan will be cleaned from those toxic people. #EhdEWafa

How did you like the episode? Let us know in the comments below!

Abandoned by his son, this old man's heart breaking video leaves people furious and in tears