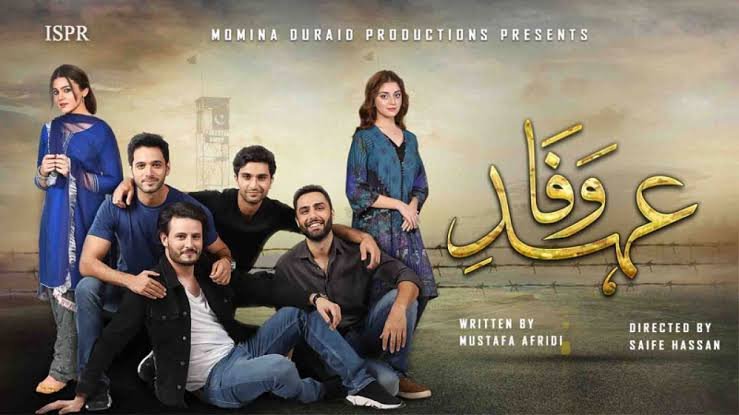 Ehd-e-Wafa, the country’s favourite drama came to a perfect end last night, giving the audience a mini heart attack as they thought their theories of Saad dying were true, but that wasn’t the case, the ending was rather beautiful and one that the nation will remember for decades to come!

From the SSG gang to the plot to the women in the drama, to the Abhinandan-Humayun encounter, people loved every little thing about the last episode!

It had some missing Major Asif Ghafoor:

When Major Humayun Said:"This Time we Will Not Surprised Them But We Will Shocked Them".
I Miss Major Asif Ghafoor.#EhdEWafa #PakistanArmy pic.twitter.com/ossLbwrQPq

I mean we couldn’t hold back our tears either:

No one can stop there tears after watching this scene!!!!!!!!!!
Friends are life❤️#EhdEWafa pic.twitter.com/xYu68UR4mp

#EhdEWafa ended but acting of this man was great. We can't forget this man. What a Amazing acting .😍❣️#EhdEWafa #ISPR pic.twitter.com/1T5FtKQU6X

People were loving the shade!

Finally, #EhdEWafa comes to an end..Reality-Based Best DramaRed heart real-life Saads who fought with dignity but didn't surrender #EhdEWafa is a tribute to our soldiers, our "Real life heroes"Red heart thanks to ISPR for Fabulous story green heart Pakistan Zindabad😁😘😍😍😍🇵🇰 pic.twitter.com/3sqN75ix5R

This scene had us cracking!

True Friends are hard to Find, Harder to leave & impossible to Forget..,

A soldier don't fights alone, there is a family behind him who supports him
A mother who gives her son to country

A father who gives his "resort to old age"to country

A sister who gives her partner to country
Don't allow anyone to separate hatred against our soldiers#EhdEWafa pic.twitter.com/oigj7DNKP1

An appreciation tweet for women of #EhdEWafa
Innocent & honestly speaking your heart out as Masooma, be the strength of your man as Rani, never let anyone mess with your life like Dua, be as fearless and ambitious as Ramsha 🌟#EhdEWafa pic.twitter.com/VDQfCq0SZH

Y'all will be in our hearts forever. We will miss you SSG ❤:'))))#EhdEWafa pic.twitter.com/29wPOXiiGA

Major Gulzar was a national favourite:

Salute to his acting😍😍
His acting was masterpiece. I love his acting😍😘#EhdEWafa pic.twitter.com/MeJmru5q5P

We have many Saads in our Army , serving nation, remember them in your prayers ❤️#EhdEWafa pic.twitter.com/u9ljIyc3so

And here is this whole scenario which had me in tears literally 😭😭
I mean weren’t their expressions enough that the director added those flashbacks too,be it shariq,shehryar,shahzain,gulzaar or dua…i cried seeing all of them remembering saad😭
And that bgm🥺💔#EhdEWafa pic.twitter.com/bEAbBHMoac

This was absolutely heart warming:

Omg showing from the Start 🖤
Flashback of SSG ♥️😍#EhdEWafa pic.twitter.com/6YHW0dHRFl

What an epic journey!

Words of this Scene 🔥
Humayun Saeed has done this in a great manner. Pakistani's are proud of their Army 🇵🇰
Pakistan zindabad ❤#EhdEWafa pic.twitter.com/LOh7nqvCZY

What did you think of the last episode? Let us know in the comments below!

Diva Jukebox: 10 Songs Everyone's Been Tuning To This Week!

Breaking The Glass Ceiling: 11 Most Noteworthy Female Executives of Pakistan!