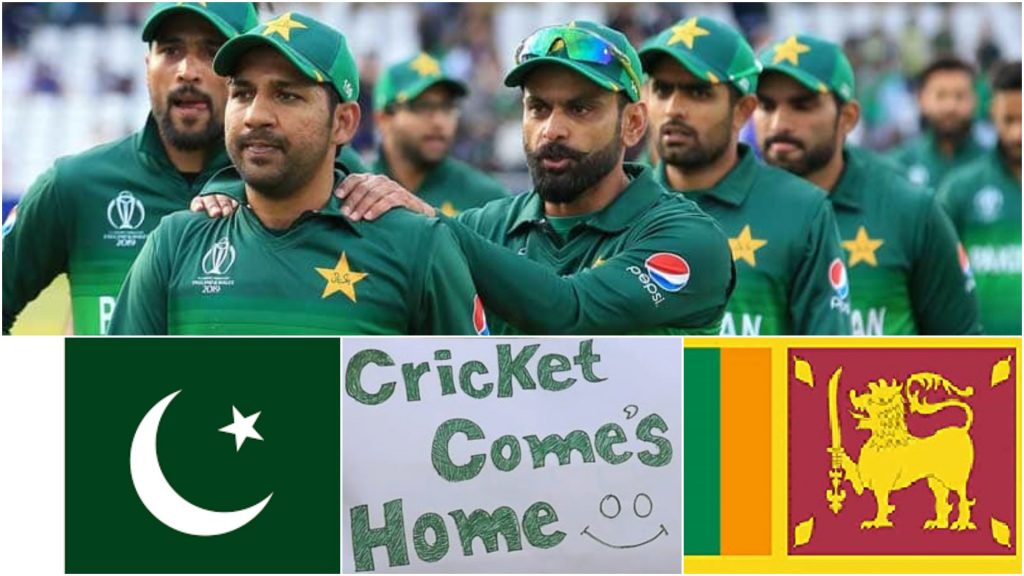 This nation and its love for cricket will never part ways! Be it the PSLs on international series, cricket runs in our blood. And the nation is celebrating the coming back of international cricket to Pakistan, the National Stadium in Karachi is at its very best right now to host the ODIs between Pakistan and Sri Lanka. Fans and members of the team took to social media to share their excitement:

Team captain Sarfaraz Ahmed requested the people to show up at the stadium and support international cricket!

History will be made on Friday when Karachi will host the first ODI series since January 2009. I request all cricket fans to be part of history so that they can tell the next generation that they were at the National Stadium when an international series was played. pic.twitter.com/YYifMYswvj

Babar Azam, the vice captain of the team shared how big of a day it will be for him:

Friday will be one of my biggest days when I will take the field as Pakistan vice-captain. I will want the entire country as well as the National Stadium crowd to make this a day to remember for me. #PAKvSL pic.twitter.com/YbhfvHIIga

Shadab Khan pledged to donate all the money from the match to those affected by the earthquake:

I pledge to donate all my match fees from the #PAKvSL series to the ppl affected by the #earthquake in Pakistan today. Let’s try to help our brothers and sisters in need.

He further shared how honored he was and also urged everyone to help those affected by the earthquake:

I pledge to donate all my match fees from the #PAKvSL series to the ppl affected by the #earthquake in Pakistan today. Let’s try to help our brothers and sisters in need.

Imam ul Haq too shared how happy he was to be playing:

Playing against Sri Lanka will always be something special for me. I want to celebrate that hundred again and this time in front of a packed house and my own people. #PAKvSL ODI series is here and Karachi is ready! pic.twitter.com/8umSYLrQMt

Haris Sohail shared how he was honored to be a part of the team:

I feel honored to be part of the team that played the first bilateral ODI series in Lahore when cricket returned to Pakitan in 2015. I want to relive that unreal experience on Friday at NSK.

Karachi be there to be part of this historical #PAKvSL series. pic.twitter.com/NJTodLGbCb

Imad Wasim too asked the people to show up at the stadium:

Leading @KarachiKingsARY in Karachi and the support from fans at NSK is something that I can never forget. I am hoping that Karachi will not disappoint this time either.

Cricket fans in Karachi your team will be waiting for you during the #PAKvSL series. pic.twitter.com/T0eqSsteyw

Fahad Mustafa too wished the team best of luck:

SriLankan team was given a warm welcome as they arrived in Pakistan:

Warm welcome to the visitors to the city of lights.#PAKvSL action to being on Friday. pic.twitter.com/WJsE6LA5DV

The stadium is all set to witness history!

This series indeed will be a win against terrorism as well:

After rain moments in National Stadium Karachi. It's just looking awesome. Welcome Sri Lanka to Pakistan and enjoy beautiful cricket. This series is not just a series but also winning of cricket against terrorism."❤😍"
#PAKvSL pic.twitter.com/Gi8UBHY1Pq

Chacha Cricket and Chacha T20 will also be arriving to Karachi from Lahore to root for Pakistan:

Chacha Cricket & Chacha T20 off from Lahore to Karachi for #PAKvSL series pic.twitter.com/qervUTZ6nf

We’re sure it’ll be jam packed!

Tomorrow is a BIG DAY for us as Int. cricket is returning home after 10 years!! 🇵🇰 #Karachi walo!! Go buy tickets!! We want jam packed stadium!! Show the world how much we love this game!#PAKvSL #CricketComesHome

All credit goes to these groundmen:

– Historic day tomorrow for Karachi’s National Stadium which is going to host an ODI after TEN years. #PAKvSL

PCB has also installed Honour’s board at the stadium:

PCB installed Honour's Board at National Stadium Karachi where those cricketers are named who scored centuries & took haul of 5/10 wickets in ODI and Test format. Earlier PCB also placed Honour's Board for veteran sports journalists in GSL who covered Pakistan Cricket.🏏#cricket

The bowling coach for the team won’t be able to see the first ODI against SL:

Pakistan bowling coach Waqar Younis will miss Pakistan’s first ODI against Sri Lanka in Karachi on 27 September as he will travel to Sydney to attend his daughter’s graduation ceremony. Waqar will return in time for the second ODI on 29 September #PAKvSL #Cricket

All thou, tickets i ordered were of 2nd odi. 🤷🏻‍♀️

This ODI will also mark Misbah’s first match as the team coach:

Pakistan's ODI against Sri Lanka in Karachi on Friday will be special for two reasons:
🔸 Their first ODI at home since May 2015
🔸 Misbah's first match as international coach

Are you excited for the series? Let us know in the comments below!

Imran Khan proves himself a great world leader at the 74th UNGA.